Home » Turtles » Why Is My Tortoise Gulping? 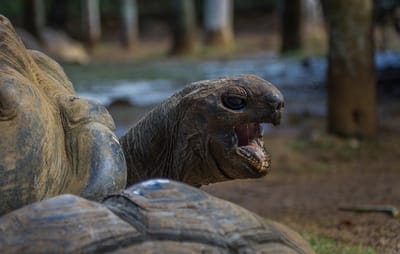 As a tortoise owner, you’re probably pretty accustomed to your pet’s behavioral patterns. So if you notice anything that seems out of the ordinary, you’re sure to have a few questions! Gulping is one behavior that worries many tortoise owners.

So why is my tortoise gulping? Gulping is the way that tortoises breathe. In some cases, gulping could also mean that your tortoise has something stuck in its mouth or throat. Finally, gulping could be an early sign of a respiratory infection.

In this article, we’ll discuss the way that tortoises breathe in comparison to the way that other animals breathe. We’ll also go over everything you should do to prevent and treat choking. Finally, you’ll want to check out the section regarding respiratory infections to make sure that your tortoise isn’t ill.

How Do Tortoises Breathe?

Tortoises actually breathe differently than most animals. The majority of animals breathe by alternately expanding and contracting the thorax, the part of the body between the neck and the abdomen that contains the lung cavity.

Since tortoises’ ribs are essentially “locked up” inside their shells, they’re unable to do this. Instead, tortoises have to rely on their muscle power in order to breathe.

Because of this, you may notice your tortoise appears to be gulping down air. It may also move its head up and down and pump its front legs as it breathes. This is completely normal and especially common in small juvenile tortoises!

If gulping isn’t accompanied by any other strange behavior, it’s likely that your tortoise is just breathing normally. Of course, if you feel you have any cause for concern, get your pet to the reptile vet for an examination. 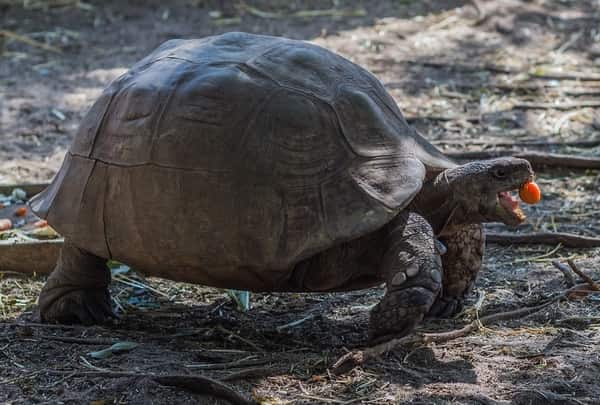 What Should I Do if My Tortoise Has Something Stuck in Its Throat?

It is possible for tortoises to choke on food (or other items in the enclosure if they’ve tried to eat them). There are a few factors that play into how common choking is.

What Could My Tortoise Be Choking On?

The realistic answer is that your tortoise could be choking on anything that’s small enough to fit in its mouth. But the most common objects that get stuck in tortoises’ throats are small decorative rocks from the enclosure, other tank decorations, chunks of food, and substrate.

Tortoises are also prone to trying to eat small items when they’re allowed to roam outside of their enclosures. Tortoises are curious creatures, and young inexperienced tortoises especially will try to eat almost anything!

How Can I Prevent My Tortoise From Choking?

It’s always better to be proactive and avoid the problem altogether than to encounter the problem and then try to fix it. Here are a few ways you can lessen the chance of your tortoise choking.

– Choose a suitable substrate. Some substrates are more likely to cause choking than others. Generally, sand is not recommended as a substrate; it also comes with a risk of impaction. Impaction is an issue similar to constipation, when your tortoise ingests something and it forms an indigestible lump that can’t travel through the digestive system properly.

Some curious tortoises also eat rocks and pebbles; the best thing to do is to observe your pet carefully when you first get it to see its behavioral patterns. Some tortoises do just fine having pebbles and rocks in their enclosures, while others will try to eat them.

Coconut coir and soil or loam-based substrates are recommended for tortoises. These options have the added bonus of great water retention, which helps to keep up humidity levels in the enclosure.

– If you let your tortoise explore outside of its enclosure, make sure to clean up.

It’s very important to clean any area that your tortoise spends time in. Be sure to vacuum before letting your pet roam so that there aren’t any small objects lying around on the floor. You’ll also want to check under furniture and in the corners of the room to ensure there are no small items lying around.

A handy tip is to block off a safe area for your tortoise using baby gates or small pet gates.

– Provide plenty of water. When humans choke, one of the first things we typically do is drink some water. Many times, that’s all it takes to resolve the problem! Make sure your tortoise has that same ability by providing fresh, clean water on a daily basis.

– Chop up your tortoise’s food. This isn’t necessary for all tortoises, but it’s a good idea if your tortoise is young, weak, ill, or old. If you’ve noticed your pet struggling to take bites, go ahead and help them out by chopping up their food into easily digestible pieces. Weak or young tortoises can also really benefit from you smashing up their food so that they don’t have to chew it as much.

How Can I Help My Choking Tortoise?

First, know that many times, tortoises are able to resolve the problem themselves. If your tortoise is breathing properly and appears to be trying to get the item out of its throat, it’s best to let it continue to work things out on its own.

Unfortunately, there’s not a whole lot that you as the owner can do if there’s something stuck in your tortoise’s throat. If your tortoise is having trouble breathing, it’s essential that you get it to the vet as soon as possible!

It can be helpful to see the inside of your tortoise’s mouth, but if your pet is choking, you definitely don’t want to pick it up to examine it. This will only add to your tortoise’s stress.

Instead, get down on your pet’s level to see if there’s anything in its mouth or throat. If there’s an object hanging out of its mouth, you can gently pull it out. But never force your tortoise’s mouth open–you can cause injury.

If the situation doesn’t resolve itself within a day or so, make sure to take your tortoise to the vet, where they can safely remove anything that’s stuck in its throat. Never attempt to do this yourself with tweezers or any other tool; this is very dangerous for your pet! 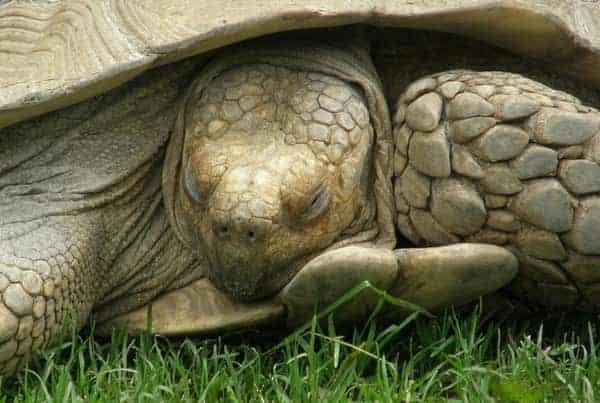 How Do I Know if My Tortoise Has a Respiratory Infection?

Respiratory infections can develop for a variety of reasons, but they typically result from problems with husbandry. Husbandry refers to your tortoise’s environment and diet. A few causes include temperatures and humidity that are too high or too low, dusty substrate, and a dirty enclosure.

Symptoms of a respiratory infection include:

If your tortoise has any of these symptoms, it’s extremely important that you take it to the vet as soon as possible! Respiratory infections can be very dangerous and life-threatening for tortoises, so you’ll definitely want to get your pet some expert care and treatment.

Typically, your pet will be given antibiotics, anti-fungal, or anti-viral medication. Tortoises usually begin to feel better after a couple of days, returning to normal within a week or two.

If your tortoise is gulping, there are a few things that could be going on. First, your tortoise may just be breathing. This is especially likely if your pet is bobbing its head and moving its front legs as it gulps.

However, there’s also a chance that your tortoise could be choking on something. Never try to pry open your pet’s mouth, or use tweezers to pull something out of its throat! You’ll end up doing more harm than good.

If your pet appears to be choking but is still breathing normally, give it some time to work out the issue on its own; tortoises have natural instincts that kick in during these types of situations. But if your tortoise isn’t breathing normally or if it’s had something stuck in its throat for more than a day, take it to the vet!