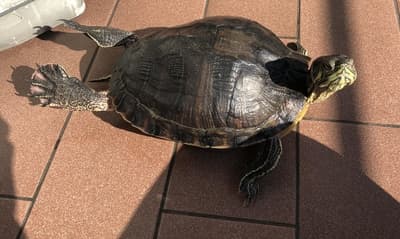 Have you brought home a small turtle, hoping to enjoy its youth and cuteness for a little while, only to find that your new friend is suddenly growing at an alarming rate? Not to worry! Turtle growth, especially in younger turtles, is affected by a number of different factors — and usually isn’t anything to be concerned about.

So, why is my turtle growing so fast? Turtles can grow at faster or slower rates depending on their age, how much food they are eating, the balance of proteins, vitamins, and other good stuff that makes up that food, as well as how fast your turtle’s metabolism is!

In this post, we will discuss a few of the factors that go into turtle growth, including age, feeding amounts, types of food, and turtle metabolism. We will also discuss the various types of food that make up a balanced turtle diet, so that you can feed your turtle well and keep him happy and healthy! 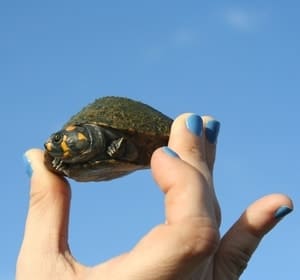 Brought home a baby turtle? You can expect it to grow pretty fast — even faster than you may have been expecting, especially if your only frame of reference is adult turtles. While adult turtles with a proper diet and habitat will grow an average of about one inch per year, baby turtles can grow a whopping three inches in the same amount of time, up to triple the average growth rate of adults!

If you are surprised that your turtle is growing faster than you had expected, consider its age. If he is still young, you can expect growth rates to slow down after the first year or so, but in that first year, he can grow at much faster speeds than an older turtle — and this is completely normal.

However, even if your turtle is small, it is important to give him plenty of room to grow, just to make sure his growth isn’t stunted by lack of space or resources. Always make sure your turtle has a habitat that is big enough to comfortably fit him, even if he gets quite a bit bigger!

This will ensure that your turtle does not suffer from common effects of inadequate captivity, such as depression, malnourishment, or stunted size. Always make sure your turtle has an adequate basking area with a light that gives him enough UVB rays to promote proper growth and a strong, healthy shell.

Without enough UVB rays, your turtle cannot process nutrients as well as he should, which can lead to stunted growth as well as other problems like soft shell or shell rot.

While your turtle’s diet isn’t the only factor in how fast or how big he grows — genetics and environment do play a small part as well — it is definitely the biggest factor. Firstly, the amount of food you are giving to your turtle directly influences his growth rate.

Of course, if you don’t give your turtle enough food, he will not have the vitamins or other necessary nutrients to support a proper and healthy rate of growth. However, if you feed your turtle a sizable and balanced regular diet, you can expect him to grow in size at even faster rates than turtles grow in the wild!

Since your turtle will have regular guaranteed access to food as a housepet, he doesn’t need to worry about scavenging for scraps, especially in seasons such as winter when wild food is scarce. Because of this, wild turtles will generally go into a hibernation period, during which they sleep for three to five months and do not grow at all.

Unlike wild turtles, your pet turtle will not go into hibernation, but instead keep growing through the whole year straight! The combination of regular healthy feeding and more time during the year to grow means that pet turtles can potentially grow much, much more than wild turtles do.

Now, keep in mind that turtles will eat differently depending on how old they are. While older turtles are generally omnivorous — meaning they can eat both meat and plants as part of their regular diet — baby turtles tend to be mostly carnivorous, or meat eating.

If your baby turtle turns away from the greens and fruits at mealtime and only goes for the meat, don’t worry too much. He will generally grow out of his picky taste as he gets older and accept more balanced meals as an adult.

As omnivores, turtles have a wide, wide range of possible foods to choose from when putting together a balanced diet. This makes it easy to keep track of exactly what you are giving your turtle — just make sure to feed him regularly, and not overfeed or underfeed him, as these can both cause their own separate but significant problems. 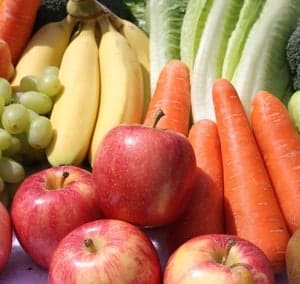 Just because turtles can eat a variety of foods doesn’t mean you don’t need to be careful about what you feed them, though. Just like with humans, turtles gain different benefits from eating different types of food, and a healthy adult turtle should have a diet consisting of a wide range of different foods, with not too much or too little of any one food group.

Turtle diets should consist of a combination of meat and fish, pellets, worms or bugs, fruits, vegetables, and other aquatic plants. Of these food groups, the protein-heavy items such as meat and fish contribute most directly to your turtle’s growth. Turtle shells are made up largely of protein, so the more protein your turtle eats, the more he can put towards growing bigger.

However, too much protein can be a bad thing — although your turtle’s shell may get bigger, an excess of protein can cause a disease known as “pyramiding,” in which the turtle’s shell develops a series of triangular bumps that resemble pyramids, rather than being the smooth surface it should be.

To avoid this, make sure to balance out the proteins in your turtle’s diet with a healthy array of fruits and vegetables to give him all the other essential nutrients he needs, such as calcium, which also helps your turtle with stable, healthy growth!

Just make sure to stay away from vegetables that have too many oxalates, such as spinach, as those oxalates can actually make it harder for your turtle to absorb calcium. Other leafy greens are perfectly fine though!

Another factor that goes into turtle growth is metabolism, or how efficiently your turtle takes the nutrients from the food he eats and converts them into energy to use throughout his daily life. Like humans, turtles can vary in how fast their metabolism is — some turtles can eat lots and lots of food and not grow as quickly as others, because their bodies are taking the nutrients from that food and burning them as energy during swimming, walking around, etc.

However, other turtles that are less active may just take that energy and put it towards growth rather than movement, meaning they might grow just a bit faster than turtles that put their energy towards movement. Neither of these are bad, they are just indicators of your turtle’s specific genetic makeup and bodily function.

However, if your turtle has been growing quickly for most of its life but suddenly seems to have slow, abnormal, or stunted growth, it may be worth asking a vet or reptile expert about it, to determine whether or not your turtle’s health is the factor influencing his sudden change in growth speed.

If you have brought home a turtle that is growing faster than you had initially anticipated, that isn’t necessarily a bad thing! Pet turtles grow at a much faster rate than wild turtles, and most especially so in their first year — during which they can grow up to three times as fast as they normally would!

Turtle growth is a natural effect of good living conditions and a healthy diet. This diet might consist mostly of meat when your turtle is a baby, but should be balanced out with plenty of fruits, vegetables, and aquatic plants as your turtle grows into adulthood.

As always, ensure your turtle has the right environment and care for a healthy lifestyle. Fast growth is generally nothing to be worried about; however, it is good to take note of what your turtle’s general growth rate is once it stabilizes, as sudden changes or drops in growth rate could indicate that something is wrong. If so, don’t hesitate to take your turtle to a vet or other reptile expert for a professional opinion.