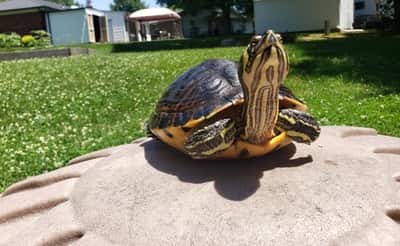 If you are a new turtle owner, or if you have never seen your turtle go through a burst of hyperactivity, it might be concerning to see your aquatic friend swimming frantically around his tank, bumping into the glass over and over, or generally acting more hyper and excitable than he normally would.

So, why is my turtle so hyper? Your turtle may be scared or confused, particularly if you have just brought him into a new place; but if you have had your turtle for a while, he might just be hungry or his habitat’s temperature could be off. If you have a female turtle, she may be pregnant and looking for a place to lay eggs!

In this post, we will lay out a few of the possible causes for why your turtle is acting more hyper than usual. We will also offer some tips on how to restructure your turtle’s environment so he can be as happy and calm as ever.

Stress and Confusion in Turtles 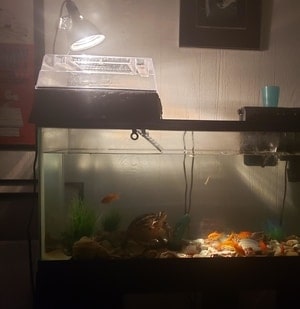 Have you ever heard the phrase “crawl into your shell” used to describe someone shy or easily spooked? Well, it certainly rings true for the turtle, who is very susceptible to stress, fear, or confusion even with the slightest change in circumstance.

While common reactions to stress in turtles include hiding either in their own shell or in a larger hiding spot, this may not always be possible depending on what type of environment they are in.

If your turtle thinks he can’t hide to get away from whatever is causing his fear or confusion, he may try to outrun — or outswim — it. This can show itself in what looks like bursts of hyperactivity, with your turtle swimming frantically around the tank or body of water he is in to try and find a safer place.

If you find that your turtle is trying to hide but just can’t seem to figure out where, try rearranging his tank a bit to include a comfortable hiding spot for him! He might duck away and show his face a bit less than usual, but he will be much more comfortable — and much less nervous — if he has a place he can retreat to when scared or overwhelmed.

Aside from making his environment as welcoming and comfortable as you can, there is really not much to do for a stressed turtle other than wait for him to acclimate to whatever is causing his hyperactivity.

Keep a close eye on him to check on any behavioral changes, but try not to alter his habitat more than necessary to make it comfortable. Remember — while a little change is okay, too much at once can stress your shelled friend out even more!

Turtles, like most other animals, know when their surroundings are different than normal! If you have just brought your new friend home from the store, it will probably take some time for him to adjust to his new environment, during which you may see him act a bit out of sorts while trying to figure out how to handle his new home.

This is even more true for turtles that have been brought to a large habitat into a smaller or more compact one, such as when a turtle has a very large shared tank at the store but a smaller, single-animal habitat at home.

Turtles cannot see glass, so if your turtle is used to a wide open space that he can swim around in, he might be confused by the sudden invisible barriers surrounding him, causing him to stress out as mentioned in the section above.

Unfamiliar settings can deeply affect turtles, since as a species they can become uncomfortable or anxious even with slight changes in their routine. Taking all of these changes into consideration, it’s really no wonder a complete upheaval of a turtle’s environment — from the pet store to your home — takes a bit of getting used to.

Generally, turtles take between a few hours and a few days to adjust to a new habitat, according to Shellie Alyssa on Pets On Mom.com — however, some turtles adapt more slowly, so if it’s been a few days and your turtle is still having trouble settling down, just be patient with him!

As with any new pet, give your turtle plenty of space and time to acclimate into the family, give him the proper care and comfort he needs, and he will be just fine!

Smaller Environmental Changes and Their Impact 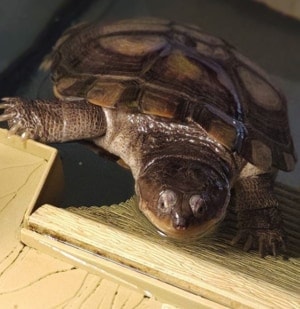 Now, a change in habitat doesn’t necessarily have to be something as dramatic as completely relocating your turtle. If you have had your aquatic friend for a while and have just recently begun to notice a spike in his normal activity, consider your recent changes to his tank.

Have you cleaned or replaced the water lately, and if so, is it at the right temperature? Have you rearranged it at all? Is his basking area set to the right temperature and lighting type? Is his diet the same as usual, or have you been feeding him a different type or amount of food lately? All of these factors can be part of why your turtle has had such a drastic or sudden change in behavior.

If your turtle is acting up more than usual and you can’t think of any large changes causing it, he might be trying to tell you that something is wrong with his habitat. First, make sure you are regularly cleaning your turtle’s tank, to ensure that his hyperactive episodes aren’t just him trying to get away from a dirty environment into a cleaner one.

Double check the water temperature and composition, the UV lights in his basking area, and the placement of any decorations, hiding holes, or other features in his tank.

In addition, make sure that his diet is okay! If your turtle feels as though he isn’t getting the nutrition that he needs from regular feedings, he may become frantic in trying to find a different source of nutrition — feed your turtle enough to keep him happy and healthy, but not so much that food goes uneaten in his tank, as this can dirty the water and create an unhealthy environment for him. Your turtle communicates with you in its own ways; if he is acting strange, pay close attention to figure out what he is trying to tell you!

If you have a female turtle and can’t pin down her hyperactivity on any one of the above reasons, consider the possibility that she might be pregnant — or, more specifically, gravid. Gravid turtles are female turtles carrying unfertilized eggs, as opposed to fertilized eggs, which are carried by pregnant turtles.

Like chickens and various other animals, a female turtle does not necessarily need a male turtle around to lay eggs, and therefore might look for a place to lay eggs in her tank even if she is a solitary pet.

If your turtle is gravid, she will look for the best possible place to lay her eggs, and may become frantic or hyperactive if she cannot find one. If you suspect your turtle might be carrying eggs, it is crucial to provide her a good laying ground in her habitat, as turtles who are unable to lay eggs become “egg-bound,” a condition which can become life-threatening.

Unlike some animals, female turtles will simply not lay their eggs until they have found the perfect spot to do so — however, this can cause problems if you are not keeping a close eye on your turtle’s habitat and behavior, since a turtle who becomes egg-bound cannot reabsorb the eggs like other reptiles, and will become pained and even sick until she can expel the eggs from her body.

Keep your turtle’s habitat as natural and realistic as possible, so that your turtle has no problem finding a safe and comfortable place to lay her eggs. This may include giving her a new tank or box filled with high-quality soil and sand to mimic the natural environment of a creek or river that she would normally choose to lay her eggs in.

This doesn’t have to be an expensive or fancy tank like the one you normally keep her in — you can even use a plastic storage tub, as long as the conditions inside of it are right for your turtle.

If your turtle is acting frantic or hyperactive, it may be due to one (or a combination of) the above factors. Your turtle may be stressed or scared due to an unfamiliar environment or sudden changes to an already familiar environment, or he might be trying to tell you that something in his habitat is not right, whether it is his diet, the temperature and lighting, or something else. Your turtle could even be carrying eggs!

Always ensure your turtle has a comfortable, naturalistic, and clean environment to keep him happy, as well as enough food and care to keep him healthy as well. If your turtle isn’t responding well to your attempts at calming him, or if you have a gravid turtle who has been unable to lay her eggs, consult a professional such as a vet or other reptile or turtle expert for guidance.