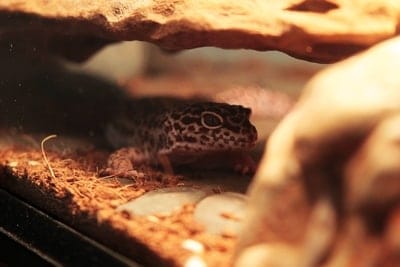 Although leopard geckos don’t have emotions, they do act accordingly whenever they feel like there’s a threat in their presence.  There are a few reasons for why your leopard gecko could be afraid of you and hopefully, I can help you identify what those reasons are so that you can address them so they won’t be afraid of you anymore.  With that said, here are the most common reasons.

Why is my leopard gecko afraid of me?  Leopard geckos usually become afraid of their owners when the owner has done something to lose its trust or whenever they have been put into a new environment and haven’t had enough time to get used to everything and everyone around them.

One of a leopard geckos main priorities is surviving, so when it comes to humans and even other animals that are closer to their size, they’ll do whatever they have to do in order to do so.  And while showing signs of fear have helped keep them alive in the wild, it’s our job to let them know that they’re safe and that they aren’t in any kind of danger.  Here’s what you should do to achieve that.

Allow Them to Get Used to Everything 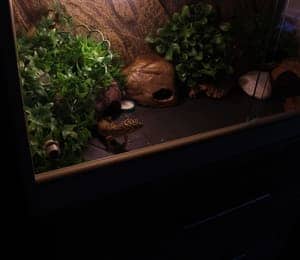 Just like you and I, it takes time for a leopard gecko to get completely used to a new environment.  The only difference between them and us is that although we might experience feelings of nervousness or anxiety in situations in which we’re not used to, leopard geckos experience the same type of feelings but instead it’s because they see everything new as a potential threat to their existence.

In order for them to get over these feelings, they have to take a little bit of time to get used to everything.  This not only includes getting used to their owners but to their new habitat as well.  Luckily, there are things that you can do to speed this process up for them.

These things include interaction, feeding, and making sure you’re not doing anything that could potentially be stressing them out.  To get a better understanding of how exactly that can be done, I suggest taking a look at this article here that I recently put together for situations just like these.

That article will teach you everything you need to know for how to train them into trusting and liking you, but just keep in mind that it does take some time for them to get to that point.  With enough patience though, most owners will eventually get there.

Relocating to a place they’ve never been before can be very nerve-racking for them, so please try your hardest to be patient with them and realize that with enough time their whole demeanor will change towards you and the enclosure that they’re staying in.

Don’t Do Anything to Freak Them Out

If there’s one thing that leopard geckos are good at aside from making sure their tank stays pretty clean, it’s identifying a bad experience with a certain object or person so that they can know what and what not to avoid.

If you’re doing or allowing things to happen around your gecko that could be causing them to stress out then chances are they’ll likely attach that stressful situation to you, even if you’re not the one that directly caused them to stress out in the first place.

For example, if you have a household cat or dog and they try and get to your leopard gecko by scratching at the tank or if you have children in the house that don’t know any better and they reach in the top of your tank for your gecko, then as a result, it might make your gecko overall very skittish of anything around them including its owner even if the owner didn’t do anything.

That’s why it’s important to not only make sure you’re keeping any stressors to a minimum when first getting them but for as long as you have them as well.  If there’s one thing that leopard geckos hate the most, then that’s stress.

Another big thing I want to get across is making sure you’re not reaching in to grab your leopard gecko from above.  When they can’t see you coming, their instincts kick in and they automatically think that your hand is a predator trying to attack them and as a result, they will either hide, hiss, and sometimes even bite at you if they feel threatened enough.

For that, I recommend getting a tank that opens up from the front so that they can see when you’re approaching.  Reaching in from the front is a lot better than reaching in from above because it won’t be as much of a shock to them when you do and because of that, you won’t run the risk of them attacking you or becoming defensive as a result.

The way I avoid this particular issue with my leopard gecko is by having them in a tank like this one here from Amazon.

In the past, I never thought it really mattered what type of tank a leopard gecko was in as long as it was large enough for them to comfortably fit in, but as the years have gone by, it’s made a lot more sense to only have them in tanks that open up through the front because of how much more beneficial it is than having one that only opens up from the top. 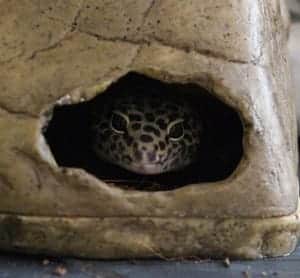 When your leopard gecko is frightened by you, the very last thing you want to do is be too pushy with them.  You may feel inclined to force yourself on them by picking them up despite how scared they are, lifting their hides up, or waking them up in attempts to get them to become familiar with you, but doing any of those things will cause tremendous amounts of stress to them and could actually further hurt your progress with trying to get them to be comfortable around you.

Although you can work with them and do everything you can on your part to get them to realize that you’re not a threat, a leopard gecko will work at their own pace when it comes to how much they decide to open up to you and unfortunately there’s nothing that can be done about that except for just waiting it out and staying patient with them.

Some leopard geckos may get comfortable with you and their surrounding fairly quickly while others will take a little bit longer, but for the sake of their health and well-being, it’s best to not try and speed up the process by doing more than what they’re comfortable doing.

Fears for all living things take time to get over, and leopard geckos are no exception.  So when training them not to be afraid of you anymore, please keep in mind that it might take a little longer than you’d like, but in the end, it will definitely pay off.

Leopard geckos do not think logically and live their life purely on instinct, so getting them to overcome something that they were born to do can be a little bit of a challenge but it is very doable without any type of force or pressure from the owner.

There’s absolutely nothing worse than getting pooped on by our leopard geckos, but because we love and care about them very deeply, we put up with it.  Their poop is not the smallest in the world, but thankfully, it’s not the biggest either.

It’s nasty to handle, but picking it up and cleaning it afterward isn’t too much of a task aside from having to thoroughly wash your hands after they do it.  Leopard gecko feces can make you sick, so to be sure you’re staying on the safe side, it’s best to not skimp out on cleaning your hands or on sanitizing them either.

Germs and bacteria can be spread from one thing to another very easily and if you’re not careful, you could put other people within your home at risk of getting sick as well, including other pets that you may have within your home.

Aside from all of the nastiness though, just remember to stay very consistent when training them on how to stop doing it.  It may be something that you don’t want to deal with now, but for all the times they’ll be pooping on you, the training will make up for it ten times over when they’re not doing it anymore.