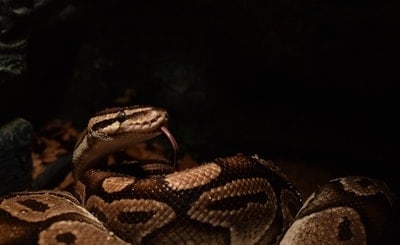 Keeping a snake as a pet is much different than adopting a cat or dog, but most ball python owners still recognize that a hissing sound isn’t a sign of happiness. While the majority of people understand what it means when they hear a cat hiss, it might not be as clear what the behavior indicates when a snake does it.

So why does my ball python hiss for no reason? For the most part, hissing is a defense mechanism. It can be a way of claiming territory, showing that it feels stressed, or expressing pain.

Check out our detailed explanation below on why and how ball pythons hiss. You can also learn more about how ball pythons show they’re stressed and what you can do to help. Finally, read through our descriptions of other behaviors your snake may display to indicate its different moods. 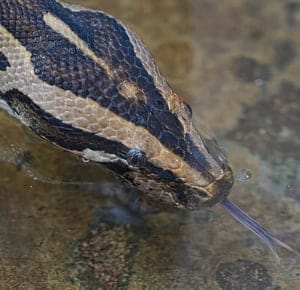 Even though most people think of snakes as predators, in the wild they are also prey. As a vulnerable species, ball pythons need different defense mechanisms. They often hide away during the day, which is more of a preventive measure. But making an intimidating sound such as hissing is a good way to try to scare a predator away.

If you just got your ball python, there’s a good chance it may view you as a predator or threat. Baby snakes typically hiss and nip more than adults. If your pet hisses at you, that’s its way of telling you to stay back and leave it alone. Pay attention to this warning! With time, your snake will grow to learn that you aren’t a danger to it. But never force it to interact with you–it might attack and bite.

Another reason a ball python might hiss is when another snake encroaches on their territory. Snakes are not social creatures; they only band together to mate and hibernate.

If another ball python tries to take over their favorite spot, they’ll likely hiss as a warning before they begin to fight over the territory. If you have two ball pythons in the same cage and they’re hissing at each other, separate them immediately.

Feeling uncomfortable or stressed is another reason that a ball python might hiss. If you just got your pet and it’s still getting used to its surroundings, it’s not uncommon to hear it hissing. It can be very stressful to snakes to be taken out of a familiar environment, or for their cage to be rearranged.

A final reason why your ball python may be hissing is because it’s in pain. If none of the other possibilities seem to be the answer, it’s a good choice to take your snake to the vet for an expert opinion.

How Do Ball Pythons Hiss?

Put simply, these snakes take in a large amount of air and then forcefully exhale it, causing a hissing sound. To be more technical, hissing involves a part of the throat called the glottis. The glottis is located at the beginning of the throat, and it’s a part of the larynx or voice box that contains the vocal cords.

These vocal cords don’t have much space between them. When air passes through the vocal cords, they vibrate and produce sound. The faster the vibration, the higher the sound created. When your ball python feels threatened or is claiming its territory, it will suck in as much air as it can.

Then it forces that air out through the glottis and vocal cords extremely quickly, making the vocal cords vibrate rapidly. Using its tongue, the snake maneuvers the air to let out a hissing noise.

What Are Other Signs of Stress in Ball Pythons?

Hissing isn’t the only way for your snake to communicate that it’s feeling stressed or threatened. There are other behaviors you should look out for that will clue you in on the way your pet is feeling.

It’s important to observe your ball python on a regular basis so that you can know what its normal behavior is and what kind of behavior is abnormal for it. With time it will become easier to tell how your pet is feeling.

What Should I Do If My Ball Python Bites Me? 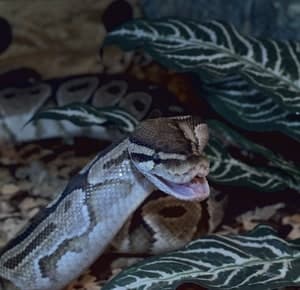 Although the idea of being bitten by a snake can be very scary, ball python bites are more surprising than painful. Typically they cause very little damage. A minor break in the skin and a couple drops of blood are usually about as bad as a ball python bite can get. You may notice some bruising as the bite heals.

The best thing to do if your snake bites you is to wait for it to let go. If you try to pry it off, you could end up with a worse injury, but you could also injure your pet’s teeth and jaw. Remember that it’s not very common for ball pythons to attack humans; they’re a popular pet because of their docile personality.

Of course, if your snake does bite you, clean the area thoroughly with soap and water. Carefully feel the area to make sure no teeth were left behind. Ball pythons don’t have fangs and they are not venomous, but they do have about 100 teeth that curve inward.

If there are any signs of infection like redness or swelling, contact your doctor. You may need to take a round of antibiotics to kill any bacteria that was transferred during the bite.

How Can I Help My Ball Python Feel Less Stressed?

Ensure that you have two single-entrance hides in the enclosure, one on each end. These play a huge part in making your ball python feel secure. When it’s able to hide away completely, your snake will feel safe from all threats, and its stress will be relieved. You can also add greenery or a cover to part of the top of the cage so that your pet feels less exposed.

Finally, when your snake appears to be stressed, try to avoid handling it for about a week. This will give your pet time to adjust to its surroundings and become more comfortable. Constant handling can be a huge source of stress and turmoil for ball pythons, who naturally spend most of their time hiding away.

What Other Feelings Can My Ball Python Experience?

If you watch your snake carefully, you should be able to identify some other feelings through its behavior.

If your ball python is hissing, that’s an indication that it’s feeling stressed, defensive, territorial, or that it’s in pain. There are lots of ways you can calm your snake down, from avoiding handling it to adding more hides and cover to its cage.

The more you observe your ball python’s behavior, the better you’ll understand its different moods and habits. The more you know, the easier it will be for you to make sure your snake stays happy and healthy!