Home » Snakes » Ball Pythons » Why Won’t My Ball Python Go In His Hide? 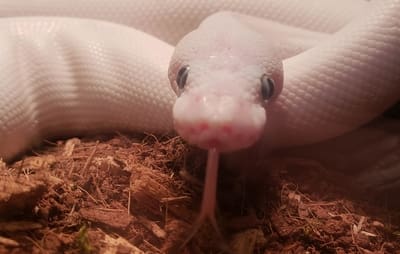 If your ball python has been slithering around endlessly, especially during the daytime, you may be wondering why it’s not going into its hide to rest. Is something wrong, or is your pet just particularly active?

So why won’t my ball python go in his hide? Typically, a ball python refuses to go into its hide because of some general issues with husbandry, or because it’s feeling scared.

Read on to find out if your ball python is feeling stressed and why that could be. You’ll also want to take a look at our list of common husbandry mistakes that can cause your ball python to avoid going into its hide.

Is My Ball Python Feeling Stressed or Scared?

If you just adopted your ball python or recently transitioned to a new tank, it’s not uncommon to see your pet slither around for hours exploring and inspecting its new environment.

Your pet may initially fear its hides, thinking that another animal may be inside! However, this behavior should subside within a couple of days, once your ball python becomes more familiar with its new home.

Other signs of stress in ball pythons include being overly active, refusing to eat, rubbing its nose against objects in the tank, hissing, and striking. Any behavior that differs from your pet’s norm can be an indicator of stress.

If your ball python seems to be stressed but not as a result of a changing environment, there could be some issues with its husbandry. We address many different husbandry mistakes and how to fix them below.

Husbandry is a general term that refers to all the aspects of caring for your ball python.

What Are Some Common Husbandry Mistakes?

If your ball python doesn’t want to go into its hide, it’s possible that you’re making one of these common husbandry mistakes. All husbandry issues can cause stress and fear, which then lead to behavior like circling the tank rather than getting comfortable in a hide.

The Tank Is Too Large

Ball pythons need a sense of safety and security in their environment. If the tank is very large with lots of open space, this can cause a lot of stress and fear for your pet. It will slither and climb around its tank looking for a way to escape all of the empty space.

To fix this problem, transition to a smaller tank or add lots of branches and artificial greenery to provide some cover for your ball python. In the wild, these snakes aren’t just predators–they’re also prey. An excessive amount of open space will cause your ball python to fear that a threatening animal will swoop down from above.

You Only Have One Hide

When you only have one hide, you’re essentially forcing your pet to choose between safety and the optimal temperature for thermoregulation. Ball pythons are cold-blooded and rely on their environment to regulate their body temperature.

If the hide is on the cool end, they’ll need to choose between safety and warmth. If it’s on the warm basking end of the tank, your ball python may overheat as a result of choosing security over cooler temperatures. Only having one hide can result in a lot of stress for your pet!

There’s a very easy fix for this problem; simply buy another hide. A hide identical to the one you currently have is best, since ball pythons are known to choose a favorite hide if they differ. This way, there is a hide on the cool side as well as the warm side, which means that there’s a safe place for your ball python regardless of where it is in its tank. 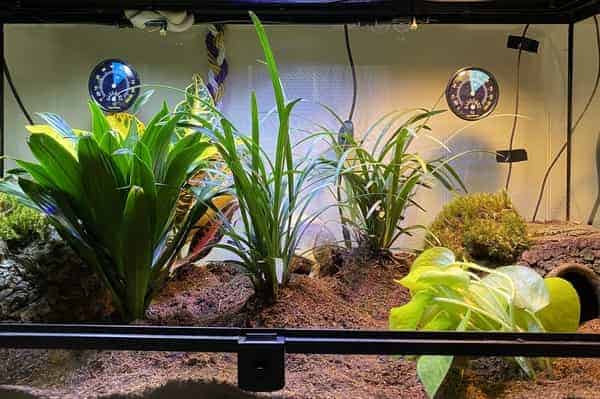 Temperatures Are Too High or Too Low

Temperatures that are too high can cause your ball python to slither around looking for a cooler place to stay. Your pet may even end up burrowing into its substrate to escape the heat! If temperatures are too low, your ball python may become lethargic and its bodily functions can start to slow. Both low and high temperatures cause a lot of undue stress.

To avoid this issue, invest in a high-quality heat source and thermostat, as well as multiple digital thermometers. This way you can easily monitor the tank’s temperature and thermal gradient.

Humidity Is at the Wrong Level

You’ll need to invest in a hygrometer for your ball python’s tank, which measures the level of humidity. Ideally, it should range from 60 to 75% at the most. To increase humidity, you can add a large water bowl to the tank, mist the substrate a couple of times each day, or place a humidifier in the same room as your pet’s enclosure.

To decrease humidity, move the water bowl away from the heat source, swap out the substrate for one that retains less water, and increase ventilation in the tank.

You Have the Wrong Kind of Substrate

You may not think that substrate has much of an effect on your ball python, but it definitely can–especially if it’s the wrong type of substrate. It’s important to avoid using sand, cedar and pine shavings, gravel, and pellets.

All of these come with a risk of impaction, which is a digestive problem where material forms an indigestible lump that won’t pass through your pet’s system.

Luckily, there are many other substrate options that will better benefit your ball python. Bio-active soil, coconut husk, coconut fiber, cypress mulch, paper towels, and newspaper are all good choices.

Coconut fiber and bio-active soil even allow your pet to burrow, which some ball pythons really enjoy. This makes sense considering that ball pythons typically live in other animals’ abandoned burrows in the wild! 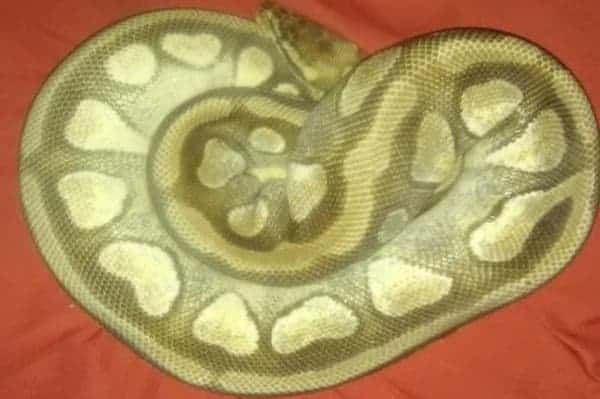 Overfeeding and underfeeding are both dangerous to your pet. You can tell if your ball python is overweight by looking at its scales. If there’s visible skin in between scales, or if they’re folding or wrinkling, your pet is overweight.

Make sure you’re feeding your ball python on an appropriate schedule. For juveniles, this is typically once a week. For full-grown ball pythons, it can be as frequently as every 10 days or as infrequent as every few weeks. Prey should weigh 10 to 15% of your ball python’s body weight, and it should be no wider than your snake is at its largest point.

Although it may seem natural to house more than one ball python together, especially if you plan to breed them, it’s not a good idea. Ball pythons are solitary creatures, and even pairs that breed should only be kept together long enough to mate.

When you put two or more ball pythons together, it’s inevitable that one will assert its dominance and the other will be forced into submission. Not only does this cause stress, but it can also lead to issues with feeding and even cannibalism.

The best solution here is to provide a well-maintained enclosure for each of your ball pythons. Although it takes up more space and is more expensive to keep up with separate tanks, it’s the best choice for your ball pythons’ health and overall wellbeing.

It’s not normal for ball pythons to avoid their hides. So if your pet hasn’t spent any time in its hides recently, it’s definitely something you should look into. If your ball python has just been moved to a new enclosure, it’s likely that your pet just needs to get more familiar with its new environment.

However, it’s also possible that you’re making a common husbandry mistake that’s causing your pet to become stressed and avoid its hides as a result. Some of these mistakes include a tank that is too large, only providing one hide, problems with temperature and humidity, and housing more than one ball python in the same enclosure.