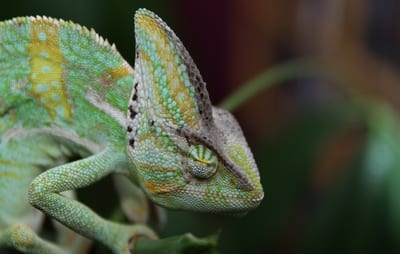 Is my chameleon just sleepy, or is there something else going on? You might be wondering this if your pet has started to spend a lot of time with its eyes closed, especially if it’s usually very active.

So why won’t my chameleon open his eyes? Your chameleon may be shutting down due to emotional stress, or it could be in the late stages of an illness. However, it is possible your pet is simply about to go to sleep.

Below, learn more about each of the possible reasons why your chameleon won’t open its eyes. You’ll find plenty of information about stress in chameleons, as well as the most common illnesses and ailments that can cause your pet to shut its eyes for long periods of time.

While keeping its eyes shut during the daytime is typically a bad sign when it comes to chameleons’ health, sometimes there’s a much simpler explanation. If your chameleon only shuts its eyes about an hour or so before the lights go out, then this behavior shouldn’t cause any worry.

This is because in nature, there is a gradual transition between day and night. This gives chameleons lots of time to find a good place to sleep and prepare for the night time. But in captivity, the transition from day to night is immediate–it literally happens at the flip of a light switch. Because of this, some chameleons adapt by finding a spot to sleep before the lights go out.

This cause is the most likely one for chameleon owners who handle their pet often. Chameleons are solitary, shy creatures that don’t enjoy prolonged contact with others. They prefer to spend time alone. Aggressive chameleons will make it clear when they’ve had enough handling for the day, but nervous chameleons react much differently.

While aggressive chameleons may hiss or bite, nervous chameleons will simply get overwhelmed and eventually close their eyes as they shut down emotionally. Unfortunately, many owners will take this as a sign of love or affection from their pet; they believe their chameleon trusts them enough to go to sleep on them. This isn’t true at all!

While we all want to be loved by our pets, it’s extremely important to realize that a chameleon is simply not the same as a cat or a dog. Chameleons have no concept of affection, and forcing them to be affectionate is a surefire way to cause stress, which in turn can cause various health issues.

Look out for the following symptoms if you think your chameleon may be experiencing a lot of stress.

One huge cause of stress is housing more than one chameleon in the same enclosure. We often assume that all animals are like us and prefer companionship over solitude. But chameleons are most happy if they never come into contact with another chameleon (or any other animal).

They are truly unsociable creatures that are most happy when left alone–even seeing their own reflection can be a traumatic experience!

It’s best to keep your chameleon’s enclosure away from any high-traffic areas in the home, and make sure not to let any other pets near your chameleon’s habitat. Lots of movement and loud noises are very stressful for chameleons.

Aside from loud and busy environments, there are many other factors of your chameleon’s enclosure that can cause stress. Keeping the temperature and humidity at suitable levels is extremely important.

Switching up the position of the enclosure or its layout can also cause stress. Chameleons like to be familiar with their environment, so any change can cause them to feel overwhelmed until they’ve had a chance to thoroughly explore their surroundings.

The way water is presented can also cause stress. For example, if you have a rain system installed and the spray is too sudden and strong, that could have a negative effect on your chameleon.

Or if the water is too cold, your pet might become fearful or uncomfortable. Therefore, if your chameleon spends a lot of time with its eyes closed, you’ll want to check out all the different aspects of its environment to see if there are any possible stressors.

Sadly, many chameleons shut their eyes when they are preparing to die after trying to fight off an illness. This is because they are dealing with an overwhelming amount of internal pain. If you know your chameleon has been sick and you notice them closing their eyes during the daytime, take them to the veterinarian immediately.

A less serious explanation as to why your chameleon is closing its eyes is that it has a Vitamin A deficiency. This is much less fatal, but you’ll still need to take your chameleon to the vet for testing.

While it’s easy to assume that providing your chameleon with a Vitamin A supplement would solve the problem, too much Vitamin A can be toxic. Therefore it’s best to let the vet determine whether a vitamin deficiency is the culprit before administering any supplements. 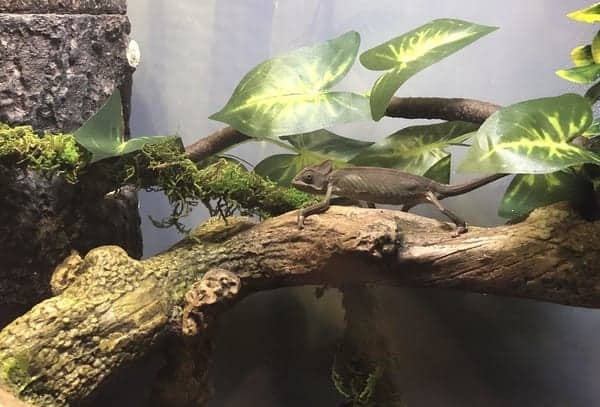 It’s usually not a good sign if your chameleon is closing its eyes for extended periods of time during the day. If this activity only occurs about an hour before bed, it’s likely nothing to worry about. But if there’s evidence of stress or illness, you’ll definitely need to take action to correct the situation.

Regardless of whether the cause is stress or illness, it’s a good idea to take your chameleon to the vet for expert advice and treatment.