We all know leopard geckos for eating different kinds of insects like mealworms, crickets, and sometimes even spiders.  But, what they aren’t known for is eating other leopard geckos.  Animals will eat almost anything when hungry, but even then, some species will take it a bit further with what they decide to consume to satisfy their hunger.  With that said, let’s get right into the question.

Will leopard geckos eat each other?  Unfortunately, yes they will.  In fact, it isn’t uncommon at all for adult leopard geckos to consume their young shortly after birth.  So in order to avoid that, babies and adults will have to be separated so that none of the lizards get hurt.

Leopard geckos are one of the sweetest animals in the world, but when it comes to how they handle dealing with other leopard geckos, they can sometimes be quite aggressive and ruthless.  Female leopard geckos go to great lengths to protect their eggs after before being birthed.  But after they’re born, they’re usually on their own.  Luckily though, there are ways to avoid this.  Here’s how.

Keep Them in Different Enclosures 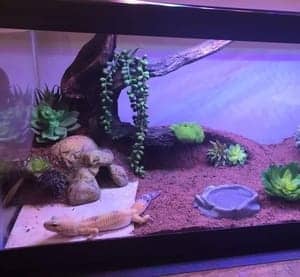 While some people are against housing multiple leopard geckos together, I’m all for it.  This is because just like cats or dogs, some of them get along while others don’t.  The same goes for leopard geckos.  Not every pair of leopard geckos will get along.  But, if you get lucky and put the right ones together, it can work.

With that said though, there are certain leopard geckos that just cannot be in the same tank together no matter what and that’s two males and unfortunately, a male or a female with a baby leopard gecko.

Once babies have hatched, they’re looked at as a nuisance and instead of putting up with their behavior, adult leopard geckos will eat them not only because they dislike them at that point but also because they feel they can get a lot of nutritional value out of consuming them as well.

This might seem weird or crazy, but actually, this is a fairly common practice that they do while out in the wild.  Mealworms and other commonly fed feeder insects are what most leopard gecko owners think of when they think of food for their leos.

But, what many don’t know is that they have been known to eat other insects such as tarantulas and sometimes even other leopard geckos if that’s the only meal they can find.  With that said, it’s probably safe to say that they shouldn’t be housed together unless they’re the same size and also if they’re not two males.

You can temporarily place the baby leopard geckos in a small tank or ventilated container such as a Faunarium, but eventually, they will need equipment to survive and will outgrow the tank pretty quickly because of how fast they’re able to grow.

With that said, if you plan on keeping any younger leopard geckos as pets, then I recommend putting them in a tank like this one here from Amazon.  Aside from the fact that an adult leopard gecko could possibly eat your smaller leopard gecko, it’s always good to have a second tank anyway just in case you need to separate two leopard geckos that all of a sudden just aren’t getting along.

Without a backup tank, things can get pretty ugly between the two lizards and by the time you get one in your possession, it might be a little too late considering how vicious they can be towards one another.

Watch for the Signs

Naturally, one might think that because most animals take care of their young after birth until they’re able to survive on their own that adult leopard geckos would never be capable of doing something as tragic as eating their own young.

But because leopard geckos don’t think like other animals, this, unfortunately, is not the case and should be a cause for concern immediately.  Baby leopard geckos should be removed from the tank right away after they’ve hatched from their eggs, but if you don’t believe that leopard geckos are capable of pestering then eating their babies, then closely watch for the signs after birth.

You don’t want to keep them housed together too long because things can go bad really fast, but if you see any of the following behaviors shortly after they’ve hatched from their egg, then get them out of their immediately:

If you detect any of those symptoms then that’s how you will know for sure what adult leopard geckos are capable of doing towards their own babies.

Obviously you’ll want to remove them from the tank way before it gets to that point, but seeing some of the behavior that’s displayed should give you the confirmation that the two leopard geckos should not and never be paired together again until they’re both adults and are either two females or a male and a female if you plan on breeding.

Anything They Can Fit 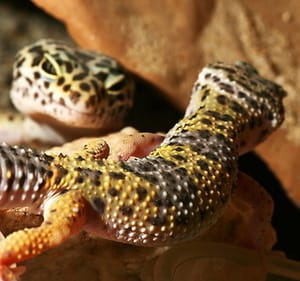 Unfortunately, when it comes to leopard geckos, they will eat most of anything that can fit in their mouth and sadly that even means eating their own.  Because leopard geckos live purely based on instinct, they can’t tell the difference between who’s friendly and who’s not.

So as soon as they see their baby leopard gecko or geckos after they’ve hatched, they automatically take them as a threat and since they’re smaller, as potential meals as well.  It almost makes you wonder how exactly leopard geckos haven’t caused their own extinction by doing this, but somehow they’ve managed to survive despite this harsh fact for a very long time.

As stated above, if you’d like to try and house them together again once your baby has grown up then that’s fine, but for the time being, it’s best to keep them apart so that your newly hatched leopard geckos don’t become your adult leopard geckos next meal.

Luckily, you can house your babies together as they will all likely be the same size.  But even then, you’ll eventually want to separate the males and have other enclosures ready for when they grow up, which for leopard geckos, doesn’t take that long.

For more information on exactly when they’ll be adults along with other helpful information that you can use to care for your older leopard geckos, check out this article here that I’ve put together on leopard geckos in adulthood and when they reach it.

Knowing when your leopard geckos become adults will help you know when and when not to try to house your leopard geckos together again.  If they’re still smaller than their parent or aren’t at that adult stage in their life yet, then it’s not recommended to put them back in the same tank together.

On top of that, keep in mind that leopard geckos will breed even if it’s with their own family because again, they don’t think logically like we do.  So take that into consideration as well before housing two leopard geckos together that are related if you want to avoid having more leopard gecko babies.

Be Patient with Your Leopard Gecko 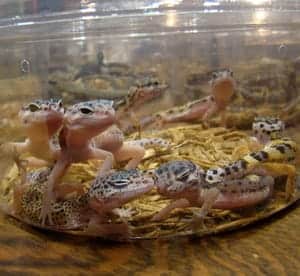 While leopard geckos are in fact capable of eating their own kind, there are things that we can do as responsible owners to completely stop it from ever happening.  Leopard geckos will never be able to consume another leo that’s as large as they are, but if they’re smaller and they can fit them in their mouth, then you better believe they’ll do it.

Leopard geckos have evolved over time to view most things as threats, including their own family.  So before you get mad at them for their actions, keep that in mind and take the measures necessary to make sure that it doesn’t happen to you or your gecko.

Birds, cats, dogs, and humans are all nurturing and loving animals when it comes to protecting their young, but as disappointing as it is to say, leopard geckos aren’t one of these types of animals.

They will protect their eggs from the very beginning of their birth to the very end but as soon as the eggs have hatched, all of that protection doesn’t amount to much because they eventually end up destroying the very same thing that they’ve put so much time and effort into keeping safe out of fear that their babies will cause them harm.