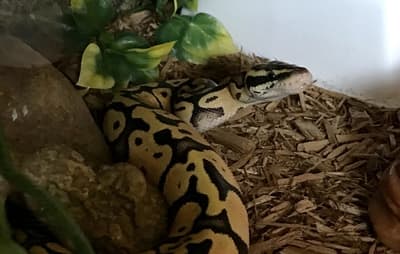 Have you just given your pet ball python it’s favorite meal, thinking it will sit back and relax for a good while now after eating? But instead you see it cruising up and down the enclosure. If this is the first time you have experienced this kind of activity after feeding, you may well be wondering if something is wrong, especially if it is not the way your ball python usually behaves.

So, are ball pythons active after they eat? Oftentimes, they’re not. But then again, every ball python is different, and even the same snake can behave differently at different times. This means that while they can be active after eating sometimes, other times they may not be.

In this article we will look at why your snake may be active after eating if it is still hungry, and discuss some guidelines on how much and how often to feed your snake. We will also look at some illnesses and diseases which may cause unusual activity after feeding. Then we will discuss optimal temperatures for ball pythons and what happens if the enclosure is either too hot or too cold. Finally we will mention how certain sounds and vibrations could be disturbing your pet.

Activity After Feeding Due to Hunger

Normally your ball python would be more active before a feed as it looks forward to its meal, and then settles down for a slow digestion afterwards. So if it’s still moving around after eating, it is possible that the meal was not fully satisfying. So let’s look at how much and how often a ball python really needs to eat. 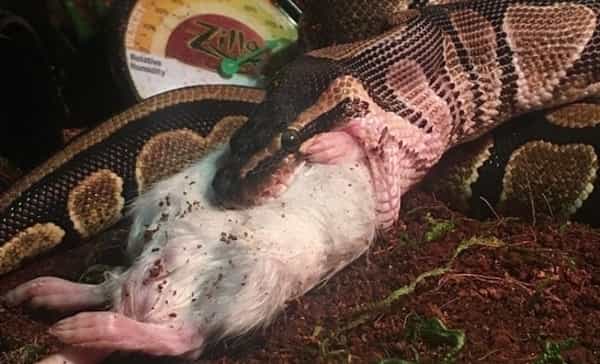 How Much and How Often Does My Ball Python Need to Eat?

The quantity of food required by your pet will gradually increase over time as it grows. The following is a basic guideline of snake weights, food requirements and feeding intervals. Always remember that your pet is an individual whose feeding needs may differ to some extent, but this can give you a helpful idea as to what and when you should be feeding your ball python.

To start off with, all your baby python needs is a pinky rat or hopper mouse of no more than 12g for the first three to five meals. These meals should be spaced out at intervals of five days.

After the first few meals, and while your snake still weighs less than 200g, it needs only a fuzzy rat or small mouse of up to 19g once a week. When it has reached a weight of 200g it can progress to a rat pup or adult mouse of 20-30g and this can be given every 7-10 days.

When your ball python has grown and achieved the weight milestone of 350g, it’s time to move on to feeding a weaned rat or a jumbo mouse of about 31-45g. By this stage it’s only necessary to feed about every 10-14 days.

As your pet python is growing well and reaches half a kilogram in weight, you can increase the size of its meals to include a small rat or two to three adult mice, totalling between 46 – 79g per feed. These meals should take place only every two or three weeks.

Having read all this, maybe you have realized that you have been underfeeding your pet ball python, and maybe that’s why it is still moving around after meal times. If so, try upping the quantity a bit at the next feed and see if it helps.

If not, and your feeds have been in line with normal python requirements, keep reading to see if you can identify some other possible reasons why your ball python is active after it eats.

Activity After Feeding Due to Illness or Disease

If your ball python is active and restless after eating it may well be suffering from some kind of malady. Here are four possibilities.

This is when your snake vomits or brings up its food before it is fully digested. By all means you would want to avoid this unpleasant and odorous occurrence! It’s important that you do not handle your snake at all after it has eaten, as any handling may cause regurgitation.

If your snake is still active after eating, just check that it has not regurgitated the meal. You will probably be able to smell it before you see it – but this may be one of the causes of after-meal activity. 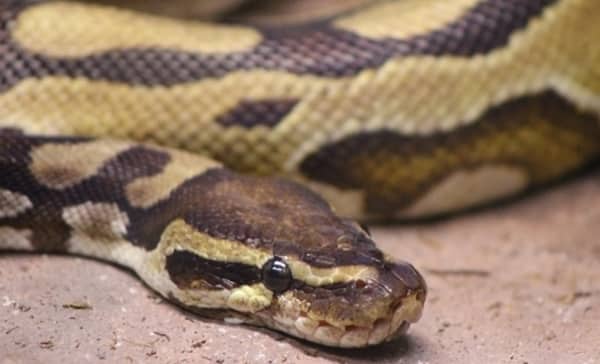 Snakes such as ball pythons which originate in tropical areas are particularly prone to respiratory infections. This is exacerbated by the fact that snakes don’t cough, so they have no way of getting rid of excessive fluid in the respiratory tract.

If your snake seems to be wheezing or making strange sounds when it breathes it may have a respiratory infection. You may also notice a discharge or even bubbles from the mouth or nose and drooling. Any of these symptoms could cause it to be active after feeding, and would require immediate attention from a reptile vet.

If you notice any kind of infection in your snake’s mouth, please don’t ignore it. There may be bleeding, or oozing of a white or yellowish discharge. This may even loosen the teeth and needs to be treated by a herp veterinarian as speedily as possible.

A sore and infected mouth may be the cause of your snake’s activity after feeding, so be sure to take a good look at its mouth to see that there are no problems there.

Mites can cause an irritation for your ball python making it restless and itchy. These are tiny little insects which look like a grain of black pepper and they feed off the blood of snakes. If you detect any mites on your python or in the enclosure, get some professional help to deal with them before they get out of hand.

Activity After Feeding Due to Incorrect Temperatures

Snakes are cold blooded reptiles that need a specific temperature range in order to function at their best. The cooler area of the enclosure should not drop lower than 75° F (24° C), while the warmer basking area should stay between 88 – 92° F (31 – 33 °C).

What Happens if It Is Too Cold

If the temperature in the vivarium is too low, your ball python may not be able to digest its food properly as the metabolism slows down too much.  This in turn may lead to regurgitation in order to get rid of the undigested food before it starts to decay in the stomach. The snake may then display some restless activity as it looks for another meal to replace the one it lost.

What Happens if It Is Too Hot

If your python’s enclosure is too hot, you may find that it constantly gravitates towards the cooler side. Ball pythons are originally from west and central Africa, and they prefer some trees and grasslands, rather than scorching desert terrain. Excessive heat may cause it to be active, even after feeding, in an attempt to find a comfortable spot. 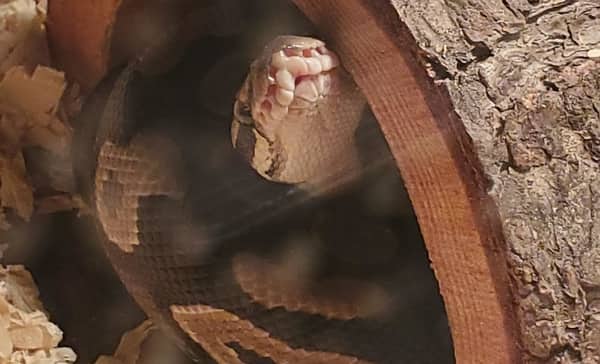 Activity After Feeding Due to Disturbing Vibrations

Have you considered that your ball python could be “hearing” things that may not be audible to the human ear? Although they do not have visible ears, ball pythons do have a certain ability to hear. Their hearing range is best between 80 to 160 Hz, and they can hear sounds up to 1000 Hz.

The thing that really affects them though, is the vibrations which travel along the ground. These vibrations are registered through the lower jaw of the snake, and in the wild this helps them to sense when predators are approaching.

It may be worth your while to do some reconnaissance in your immediate neighborhood to determine whether there is any construction work, road repairs, tree-felling or even band practice with lots of bass and percussion going on. These vibrations may be upsetting your pet and causing it to be active and restless after feeding.

Now you know that your ball python’s activity and antics after feeding is somewhat unusual. First check if it is getting enough to eat for its age and size. Then determine whether there are any health problems, make sure that the temperature of the vivarium is within the optimal range for ball pythons, and see that there is no disturbing noise or vibrations in the vicinity.

If you can tick all these boxes, and you are still worried about your pet ball python, please make an appointment with your herp vet or breeder. It’s worth getting some professional advice so that you and your special snake can be happy and healthy together.