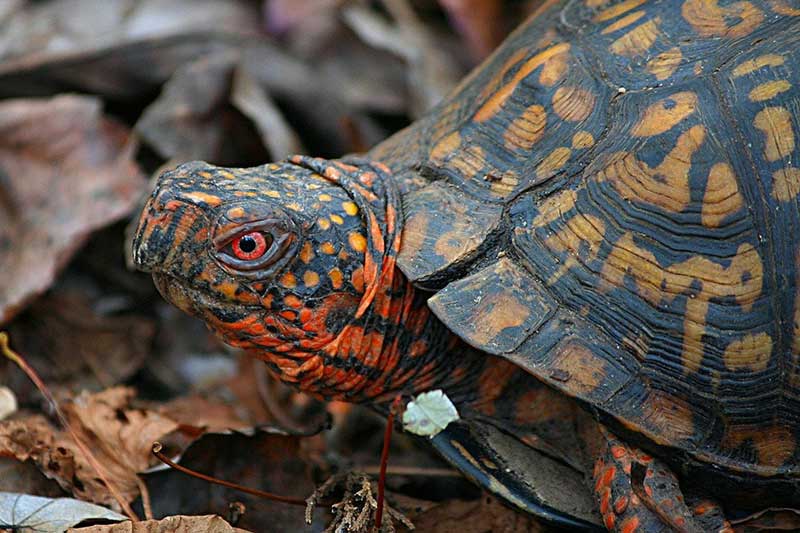 These box turtles all have a pretty similar diet and generally live in similar habitats, so let’s touch on that first.

Box turtles are omnivores and will eat a wide range of foods. Younger turtles tend to be more carnivorous, while older turtles tend to eat more vegetation, but all of them eat significant amounts of both insects and plant matter.

Box turtles prefer to live near shallow, permanent bodies of water. These turtles aren’t strong swimmers, so they spend their lives on dry land. They do, however, like to live near water and in very wet environments. Swamps, marshes, and wetlands are their preferred habitat. They also prefer areas with thick vegetation they can hide in, although adults will often venture out into more open areas.

With that out of the way, let’s have a look at Florida’s native box turtles! 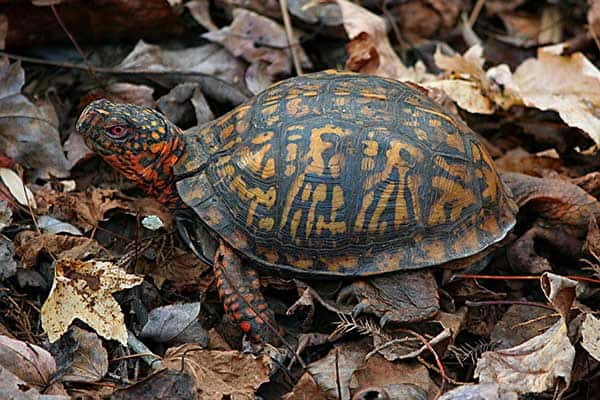 Box turtles are secretive reptiles that are seldom seen. I have lived in Tennessee all of my life and I can count on one hand the number of times I’ve randomly come across an eastern box turtle.

Eastern box turtles have a dark brown or black shell with yellow or orange patterns. Their skin will also have a similar yellow color with spots or blotches. Box turtles will only reach 5-7 inches in size, but may live up to 100 years or more.

T​his is the southernmost of the four subspecies of the common box turtle, and is pretty widespread in Florida aside from the panhandle. They spend much of their life buried underground or in the underbrush. From November to February they actually enter a state of inactivity, called brumation (the reptilian version of hibernation).

T​heir tendency to hide, and their lack of activity, makes it difficult and unusual to spot one in the wild. The best time to see them is during the summer, when the heat and humidity creates a favorable environment for them.

T​he Florida Box turtle has a narrow, high, domed shell with a hinged plastron, allowing it to be closed very tightly to protect against predators. This subspecies is the most easily identifiable of the box turtle subspecies, because it has distinctive yellow stripes on it’s back, as you can see from the picture above.

These turtles live throughout Florida, and are even found in the Keys and on the Gulf barrier islands. Their range also extends north into southeastern Georgia.

T​he largest subspecies of box turtle, the Gulf Coast box turtle also has one of the smallest ranges. It’s only found on the Gul Coast, primarily in Louisiana, Mississippi, Alabama, and the Florida panhandle.

Gulf Coast box turtles have dark brown to black shells with yellow spots. The shell is domed and narrow, like all box turtles, and it’s hinged to allow it to be closed very tightly.

T​his subspecies lives along the Gulf Coast from Louisiana to Florida. Although that range technically covers four states, Mississippi and Alabama both have minuscule coastlines, so it’s range is really quite small.

Unlike the other types of box turtles in Florida, the three-toed box turtle doesn’t have noticeable yellow patterns on its shell. Instead their shells are solid tan or olive green. They will often have the yellow or orange spots on their heads and necks however.

Their name comes from the fact that this subspecies only has 3 toes on their rear feet, while all other subspecies have 4 toes.

Three-toed box turtles are not common in Florida, but they are in Louisiana, Mississippi, and Alabama. They can be found from eastern Texas all the way to the northernmost parts of the Florida panhandle.

Can you keep a box turtle as a pet in Florida?

Y​es, but if you want to own more than two of them you will need a special permit to do so. It is illegal to take a wild caught animal and keep it as a pet. If you want to own a box turtle as a pet you’ll need to find a breeder and purchase one that has been captive bred.

B​ox turtles are pretty docile, and bites are rare. Sometimes a turtle mistakes your fingers for food, and will bite. It is possible to provoke a turtle to bite you, but you’d have to be making the turtle pretty mad. A box turtle’s primary defense is sealing itself up in its shell.

Not really, no. Box turtles like consistency in their habitats and their daily routine. Being held is definitely a disruption of that consistency. Plus, since they’re so small, you’re kind of scary to a box turtle.