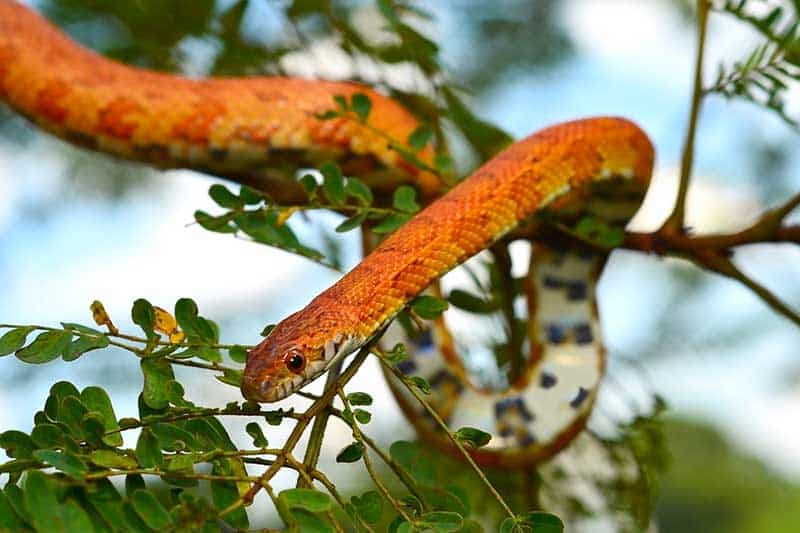 There are many types of rat snakes in the United States, and some of those are found in the wild in Louisiana. Rat snakes in Louisiana have a lush place to live that’s full of wildlife to eat. Some rat snakes are in one specific part of the state, and others have a habitat that includes the entire state. In this article we’re going to learn more about Louisiana’s rat snake species.

What are rat snakes?

Rat snakes are non-venomous snakes that feed mostly on rats, hence the name. However, they can also eat a number of other small animals that are found in abundance in the wild. These snakes are not a danger to people, and they are commonly owned as pets and raised in captivity. All rat snakes can swim, and all have round pupils.

6 Types of rat snakes in Louisiana

The corn snake, sometimes referred to as the red rat snake, is common in many areas of Louisiana. This variety is a climbing species. The average snake can grow up to 30″ to 48″ long, but there are some that reach 72″. The ones that grow in the Keys tend to be smaller than average. This variety of rat snake comes in various colors, but the average is a yellow-tan color to orange. It often has blotches of red on its back, dark marks on the belly and the top of the head has a V.

This snake breeds from April through June. It lays anywhere from three to 40 eggs in the summer. They certainly eat rats, but they can also eat mice, birds, lizards and eggs. Corn snakes have no fangs or venom and have to kill their prey with constriction. They can often be found in rocky areas, in the mangrove forests and a number of other habitats, but are often found in urban areas as well.

Their numbers have been threatened recently, but not from habitat loss. They are often harvested from the wild and get hit by cars. The rainy climate of Louisiana can also harm them by filling their habitat with water and making it harder to find prey.

The gray rat snake is found in areas of eastern Louisiana. They may bite in self-defense if cornered, but they are generally not harmful to humans or to pets. They are not aggressive animals and try to avoid both people and pets.

This variety grows to be about 42″ to 72″ long, though the largest of them was found to be 84″. They are pale gray in color and have blotches of darker gray on their backs. Their bellies are a softer tan-gray with darker blotches. They can often be found in cypress strands, pine forests, marshes, swamps and fields of crops.

They eat a number of different rodents, lizards, birds, frogs and eggs. When they eat larger prey, they are killed through constriction. However, when the prey is small, these snakes will simply swallow the animal alive.

Sometimes called the black rat snake, the eastern rat snake is a larger snake that averages between 3.5′ and 7′ long. Its head is wider than the rest of its body. The black color is glassy and may have tiny splotches of white in between the scales.

The belly is light-colored, and the chin and throat are white. They swim and climb well, and they will generally run from danger instead of striking at it. Eastern rat snakes eat small animals like amphibians, birds and rodents. Larger rat snakes may take larger prey.

When this snake is threatened, it releases a strong, foul odor. This odor is similar to the taste of poison, so many animals will avoid it. They live in many suburban areas as well as in forests and farm fields. In the wild, they are vulnerable to birds of prey and large snakes. Males fight for mating rights. When they lay eggs in July, there can be as many as 24 eggs.

The black rat snake in Louisiana is also called the western rat snake or pilot black snake. Pantherophis obsoletus is found throughout the state of Louisiana. They prefer woodlands but also live in rocky hillsides, farmlands, mountain ledges, river floodplains, open fields, and more developed areas with houses or farm buildings. As skilled climbers, you can find them climbing rafters in buildings when hunting for prey.

These snakes have similar underbelly markings as the gray rat snake. However, their bodies are black with traces of white between their scales. They average between 40 to 70 inches in length. They are also one of the largest snakes in North America and can reach up to 96 inches or more.

The great plains rat snake may be in extreme western areas of Louisiana, though they aren’t common in the state. This species of rat snake is mostly gray in color with many brown blotches on their bodies.

Great plains rat snakes are also commonly known as Emory’s rat snakes or simply house snakes. They only reach 2-3 feet length as adults and are sometimes kept as pets, like other rat snakes.

The Texas rat snake, a subspecies of the black rat snakes, is common in only a few states including the majority of Texas, parts of Oklahoma and Arkansas, and the southern two thirds of Louisiana. Specimens from the southern part of their range tend to be a more yellow color, while those from the north tend to be a darker gray.

They are among the larger rat snakes in Louisiana and can easily reach 4-5 feet in length as adults. These snakes adapt to a variety of habitats and feed on many types of prey including rats, birds, and small invertebrates. They are docile snakes and do well in captivity.