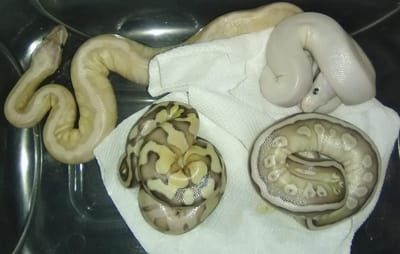 Most animals are social creatures, and it’s common to adopt more than one pet at once so that they can bond and socialize together. But does this concept apply to ball pythons, or are they happier on their own?

Below, we’ll talk about whether ball pythons live together in their natural habitat. We’ll also go over the possibilities of what could happen if you house more than one ball python in the same tank. Finally, we’ll explain whether there is any safe way for ball pythons to cohabitate.

Do Ball Pythons Live Together in the Wild?

Ball pythons are very solitary creatures. In their natural habitat, they of course come together to breed, but otherwise it’s not too common to see them together. On occasion, they’ll share a burrow out of necessity, but ball pythons generally prefer to be on their own. They’re simply not social creatures, and holding them in captivity doesn’t change that. 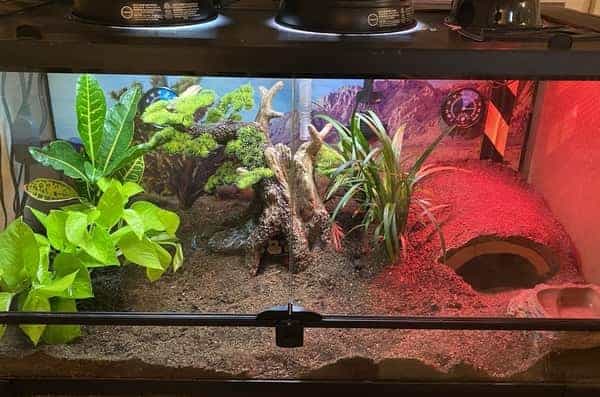 What Will Happen if I House More Than One Ball Python in the Same Tank?

While it’s possible in theory for multiple ball pythons to cohabitate successfully, it’s not common or expected. In fact, there are many common problems that arise when more than one ball python lives in the same enclosure.

One huge issue is stress, which in turn can lead to other health conditions. But you’ll likely also see a struggle for dominance and issues with feeding. In rare cases, cannibalism has even occurred.

Stress may not sound like a big deal, but it can really wreak havoc on your ball python’s immune system and basic bodily functions. Ball pythons who are forced to share a tank are likely to suffer from constant low-grade stress due to the presence of another animal in their environment.

Signs of stress in ball pythons include:

It’s very important to alleviate any stress your ball python is feeling, because stress can take a huge toll on your pet’s overall health. Stress makes the immune system less effective, leaving your ball python susceptible to illness.

Common illnesses range from mouth rot and parasites to respiratory infections and septicemia. All of these illnesses can be fatal if left untreated, so it’s always best to reduce stress in the first place to avoid them completely.

Since ball pythons aren’t social creatures, it’s not likely that they’ll view each other as equals. Instead, you’ll notice that one snake will establish its dominance over the other. The more submissive one will suffer as a result.

You may also mistake dominant behaviors as social ones. For example, it’s common to see ball pythons sitting on top of each other in the basking area of the enclosure. It can almost look like they’re cuddling and enjoying basking time together.

But what’s really going on is that the dominant ball python is laying on top of the submissive one in order to claim its territory and resources. As a result, the submissive ball python may not be able to take in enough heat. Lack of sufficient heat and basking time can then lead to health problems.

A similar situation can take place with hides. The dominant ball python will act as if the hides belong to it, forcing the submissive ball python to stay out in the open or attempt to burrow under the substrate.

A male-male pair will fight over territory and can injure or even kill each other in the process. A male and a female won’t necessarily get along either; the male is very likely to harass the female and show its dominance. Finally, a female-female pair is usually considered the least problematic, but you’ll still see one of the females asserting her dominance over the other.

Because one of your ball pythons will have established its dominance over the other, it’s likely to claim any food that enters the enclosure as its own. This means that your more submissive ball python may not be able to get the food and nutrients that it needs to survive and thrive.

Feeding issues may lead you to use a separate feeding tank, which has issues in and of itself.

Another feeding issue that you may run into is one or both of your ball pythons refusing to eat due to stress. Ball pythons have starved themselves in the past due to sharing a tank.

It’s basically a given that when you have more than one ball python living together, an illness that affects one snake will quickly spread to the rest of them. You’ll be left spending lots of time and money trying to care for your pets and return them to health.

Nobody likes a huge vet bill, and it’s even worse if your pet passes away as a result of disease. For this reason alone, it’s much better to provide a separate environment for each of your ball pythons.

Also keep in mind that one of the most reliable ways to check if your ball python is healthy is to take a look at its stool. If you have more than one ball python living in the same enclosure, you won’t be able to identify which snake the feces came from.

If you’re dealing with an issue like diarrhea, which can indicate parasites or another form of illness, you definitely want to be able to figure out which ball python it came from.

Although cannibalism is rare, it’s happened often enough that it’s worth mentioning in this article. It typically takes place when two ball pythons of very different sizes are housed together. The larger ball python eats the smaller one. This is especially true for full-grown ball pythons that live in the same tank as hatchlings.

What if I Want to Breed My Ball Pythons? 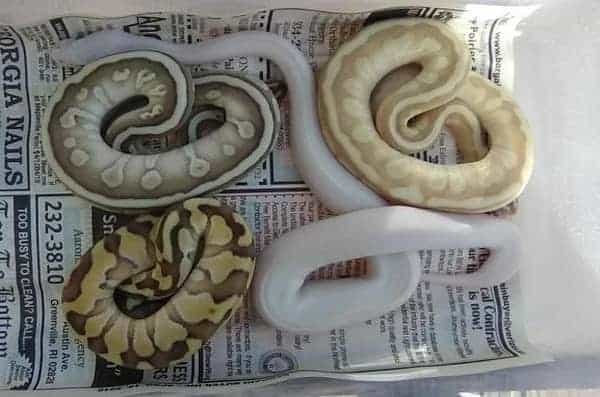 Is There a Safe Way for Multiple Ball Pythons to Live Together?

While it would be very difficult to find a ball python expert that actually recommends that they live together, some ball python owners have given tips on the ideal enclosure for multiple snakes.

Keep in mind that it will take a lot of money and effort to effectively regulate the temperature and humidity in an enclosure of this size. Cleaning will be a more difficult endeavor as well. However, if you are able to provide an environment with all of these requirements, there’s a chance that your ball pythons will be able to cohabitate successfully.

While it’s possible to house more than one ball python in the same tank, it’s definitely not recommended. The risks simply outweigh any possible benefit. Even in the wild, ball pythons don’t typically cohabitate unless it’s out of necessity.

When two or more ball pythons are forced to cohabitate, it’s common to see stress, aggressive or dominant behavior, problems with feeding, and spread of disease. In rare cases, cannibalism can even occur.

Even if you’re planning on breeding your ball pythons, it’s not necessary for them to cohabitate. The only time it’s acceptable to have more than one ball python living in the same tank is if you have an extremely large enclosure with plenty of basking areas, hides, and tank accessories.

In the vast majority of cases, the best decision is to provide each ball python with its own tank.