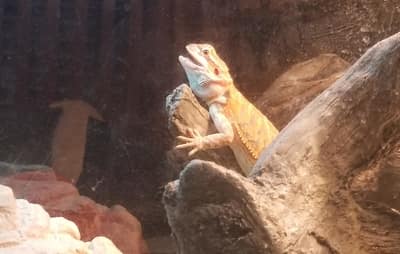 If you’ve ever watched bearded dragons eat, you’ve probably wondered how they can fit so much food into their mouths. Or maybe you’ve seen your bearded dragon hold food in its beard and are wondering whether or not that’s normal.

Read on to find out more about bearded dragons storing food in their beards. We’ll also go over tips to keep your beardie from choking, other uses for your pet’s beard, and why your bearded dragon’s beard might turn black in addition to puffing up.

Do Bearded Dragons Use Their Beards to Store Food?

Bearded dragons’ beards have many uses, and storing food is one of them! Although your beardie can’t store food in its beard for long periods of time, it can definitely save part of a meal and eat it a few hours later. Bearded dragon owners have plenty of stories about noticing a strange bulge in their pet’s beard, only to discover they were storing berries or insects there! 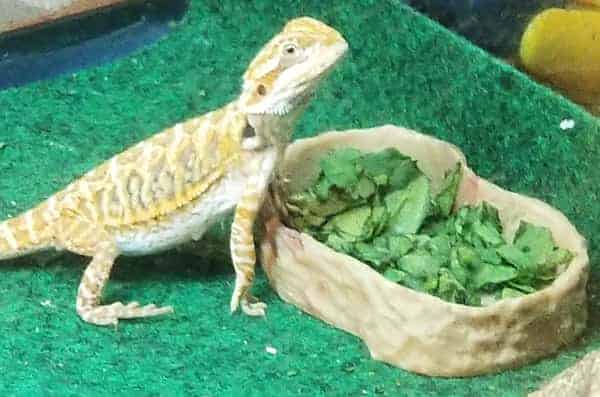 Can Bearded Dragons Choke on the Food They Store in Their Beard?

Although storing food in their beard is a pretty normal behavior for bearded dragons, it’s not particularly safe. There’s always a risk that your pet could choke on the food it’s trying to store in its beard. Because of this, it’s best to try to keep your bearded dragon from doing it if possible.

How Can I Prevent My Bearded Dragon From Choking?

First, make sure not to overfeed your pet. It’s also a great idea to chop up all food before giving it to your bearded dragon so that it’s less of a choking hazard. You can also try offering food a little at a time, and be sure to choose feeder insects that are small enough for your bearded dragon to swallow easily!

A good tip is to choose feeders that are no larger than the space between your bearded dragon’s eyes. Grasshoppers in particular pose a pretty big risk of choking to your pet, but you can make them safer to eat by cutting off their back legs before offering them to your beardie.

What Do I Do if My Bearded Dragon Is Choking?

It’s important to note that if your pet is still breathing and moving around, it should be okay. But if your bearded dragon starts coughing or gagging while eating, it’s most likely choking. The first thing you should do is try to clear out its throat.

You might want to have someone help you hold your pet’s mouth open while you do this. Holding your pet vertically or upside down can help dislodge the item as well.

Another option is to offer water or a few drops of olive oil or vegetable oil to your bearded dragon and gently stroke their beard; this should help your pet swallow whatever it’s choking on.

After clearing the throat or helping your bearded dragon to swallow the food, you can give your pet a bath to help it relax. Fill your bathtub or a plastic storage container with warm (but not hot) water up to the height of your beardie’s shoulders.

Let it soak for about 20-30 minutes, then gently dry it off and put it under the heat lamp in its vivarium. The warmth will help everything digest properly.

What Are the Other Uses of a Bearded Dragon’s Beard?

Aside from storing food, a bearded dragon’s beard has quite a few uses!

First, your bearded dragon can puff up its beard in order to display aggression. If it comes into contact with a predator, it will do everything it can to look more intimidating–puffing up its beard, gaping its mouth, and bobbing its head! Bearded dragons also puff up their beards to show dominance over others and to claim their territory.

During mating season, males will puff up their beards in order to be more attractive to potential mates! If a female bearded dragon is interested, she’ll bob her head in response.

Speeding up the Shedding Process

You might see your bearded dragon puff up its beard when it’s shedding. This is a great trick to speed up the process and force the old skin to shed off!

Bearded dragons also puff up their beards when they feel stressed or threatened. This is especially common in babies and juveniles. A few reasons your beardie could be feeling stressed out include:

Most of the time, stress is caused by a problem with your pet’s environment. If you think your beardie is stressed out, double-check temperatures, humidity, and other enclosure conditions to make sure everything is set up properly!

Sometimes, your bearded dragon might puff up its beard just to get a good stretch. It can pop its ears by expanding its throat as well! 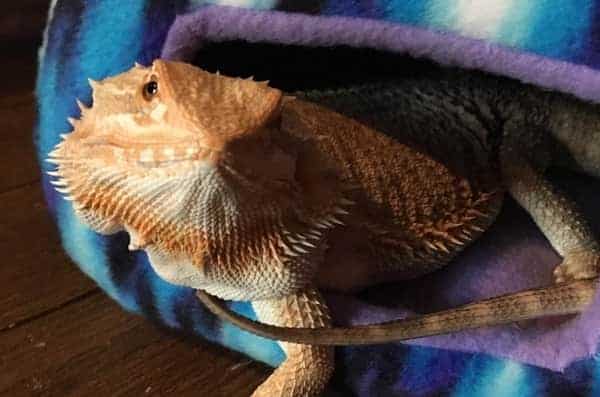 Many times when your bearded dragon’s beard puffs up, it will also turn black! There are several reasons why your pet’s beard may turn black.

Bearded dragons’ beards have a lot of different uses! First, they can use it to store food–so be sure to prepare your bearded dragon’s meals properly so that there’s less of a risk of choking. But they can also puff their beard up as a sign of aggression, to attract a mate, to speed up the shedding process, to show that they’re stressed, and to stretch.

In addition to puffing up, bearded dragons’ beards can also turn black! They can do this to show different feelings, like anger, fear, discomfort, loneliness, or aggression. Beardies can also turn their beards black as a result of issues with husbandry, particularly as a response to cold temperatures.

If your pet is sick or coming out of brumation, its beard might turn black. Finally, your bearded dragon may turn its beard black during mating season to attract a mate.