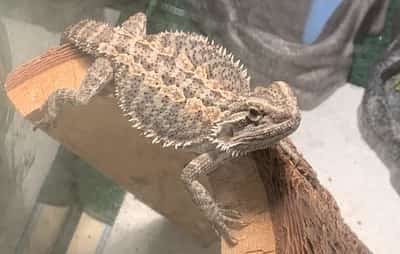 Spinning in circles is fine for bicycle wheels, but when you see your bearded dragon doing it, you may well feel a bit alarmed. Maybe you woke up one day to find your pet beardie looking decidedly disoriented and unbalanced. Then you noticed when it tried to walk it was moving around and around in circles. Now you would really like to know if this is something you need to be worried about.

So, why is my bearded dragon spinning in circles? There are at least five possible reasons for this including neurological injury, ear infection, husbandry issues such as temperature and nutrition, toxic fumes, or atadenovirus.

Read on to find out more about these possible problems so that you can have a better idea how to help your spinning beardie get back on track and walking straight again.

Spinning in Circles Due to Neurological Injury

Sometimes bearded dragons can sustain minor injuries which cause neurological problems resulting in an imbalance and hence the spinning behaviour. These injuries could be caused by falling from a height, or by getting bitten by fellow beardies. 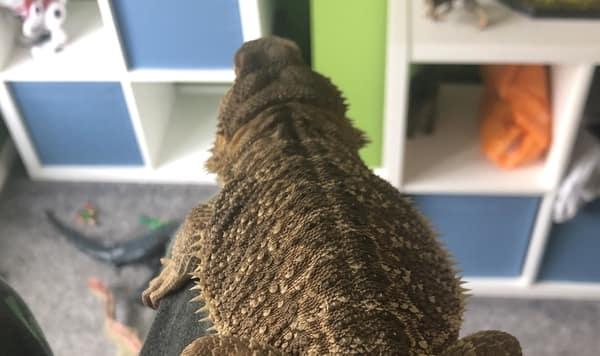 Injuries After a Fall

Some beardies, especially babies and juveniles, can be quite feisty and tend to like jumping out of your hand, or jumping off high shelves or any other surface on which they may find themselves. This may be due to poor eyesight or a lack of judgement in terms of depth.

Either way, it’s important to try and protect your beardie from a potential fall by always holding it securely or keeping it near the ground when holding. Also remove any sharp or dangerous objects from your beardie’s environment if you let it run loose at times.

Injuries From Other Bearded Dragons

Another source of injury may be from being bitten by another bearded dragon if you are housing more than one together. Beardies are famously individualistic, so it’s not a good idea to put them together, except for breeding purposes. And certainly never put two adult males together or there is sure to be some conflict.

Can you notice any visible signs of injury on your spinning bearded dragon? If it doesn’t look too bad it may heal up in a few days. If not, it’s best to have it checked by a professional.

Spinning in Circles Due to Ear Infection

Another possible reason for spinning is that some water may have got into your bearded dragon’s ears and caused an infection. Water in the ears could have happened during bathing or misting.

Water in Ears During Bathing

Did you give your beardie a bath recently? Perhaps the water was a bit deep and it was splashing a bit too vigorously. Remember the water should not be deeper than shoulder height for your bearded dragon.

Water in Ears During Misting

If it wasn’t during bathing, then maybe you misted the vivarium and somehow some moisture got into the beardie’s ears.

Whatever the case, if your bearded dragon is spinning in circles due to an ear infection, it could clear up in a few days, or you may need to get some medication from your reptile vet.

Spinning in Circles Due to Husbandry Issues

Bearded dragons have certain specific needs when it comes to husbandry, especially where temperature and nutrition is concerned. If either of these areas is deficient in some way, you may run into problems such as spinning behavior. 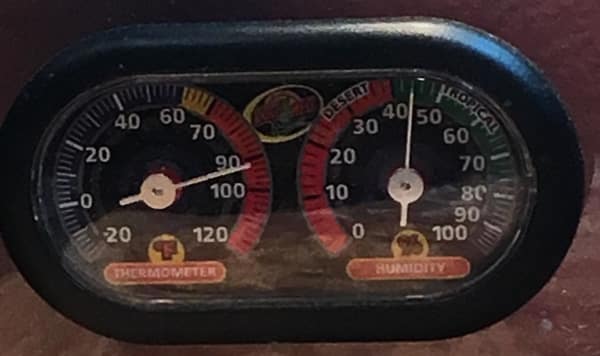 Your beardie needs a balanced diet of protein and vegetables. Any food you give your pet dragon should not be bigger than the size of the gap between its eyes. This includes the live prey as well as the veggie pieces. Beardies thrive on crickets, roaches and silkworms, and they also need their greens every day. As they reach maturity they should be having more greens than live prey.

Good vegetables to feed your bearded dragon are collard greens, turnip greens, fresh green beans, cabbage, butternut squash, mustard greens and cabbage. Fruits can be given as a treat, such as strawberries, apples, blueberries and cantaloupe.

Besides the good nutrition, don’t forget about the supplements your beardie needs. Live prey should be dusted with calcium powder daily, and multivitamins three times per week.

If your temperatures are correct and you are feeding your beardie a well balanced diet with supplements, then probably the spinning is due to some other cause. So let’s keep going till we get to the bottom of this mystery.

Spinning in Circles Due to Toxic Fumes

You may not have realized that something was toxic to your beardie, such as perhaps a new detergent you used to clean out the enclosure. Or possibly there is some unusual pollution or smoke in the atmosphere which could have caused your beardie to become unwell and start spinning in circles.

Try to discover if there have been any sorts of fumes released in your neighbourhood, or in your house that may have negatively affected your bearded dragon.

If none of the above seems to fit your circumstances, and your beardie is still spinning in circles, you may be looking at a case of Atadenovirus.

Spinning in Circles Due to Atadenovirus

This disease is unfortunately fairly common among bearded dragons and it is contagious, so it is important to isolate your pet if you suspect it may be ill. This used to be referred to as “Adenovirus” but nowadays it is more commonly known as Atadenovirus.

Babies are affected somewhat differently than adults by Atadenovirus. The younger beardies are usually thinner than their peers, and are in poor condition, preferring to hide away. Sadly, baby beardies may not make it beyond three months if they contract atadenovirus.

Adult bearded dragons who are ADV-positive tend to show signs such as being underweight and lethargic, as well as twitching, seizures and spinning. They may also arch their head and tail which is often called stargazing. 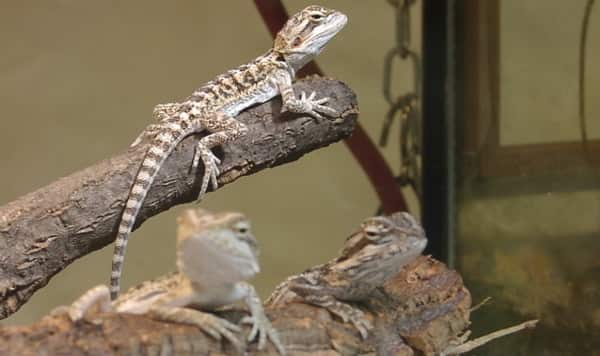 As mentioned above, the adenovirus is highly contagious, so it can spread like wildfire through a tank of baby dragons. It is spread simply by contact or by sharing the same environment, or from contaminated tools or hands. It can even be transferred on uneaten food or insects which may have been moved from one cage to another.

Symptoms of atadenovirus are not always evident as it is possible for a perfectly healthy bearded dragon to be a carrier of the virus. Unknown to you they could be spreading the virus to previously uninfected dragons.

Spreading can occur when a female is brought in for breeding purposes, although it is not spread by mating as such, but rather just from the proximity of the enclosure. If a female bearded dragon is infected with the atadenovirus, she can pass it on to her babies. Once a baby is infected it spreads very easily and quickly to the other babies in the incubator or cage.

At this time there is no cure as such for the Atadenovirus, but you can treat the symptoms by keeping your beardie isolated and warm with UVB light. Keep it well hydrated with daily baths in shallow, tepid water. If dehydration is an issue, you may need to syringe some water into its mouth, or get fluid injections from your vet.

If your beardie is not eating and losing weight, it may need a little help with hand-feeding crushed insects or a liquid diet with added vitamins and calcium. Your herp vet would be able to detect further issues such as bacterial or fungal infections which could be treated with antibiotics or antifungal medicines.

If there are liver problems, you may need to give your beardie some milk thistle and other nutraceuticals.

Now you know that spinning in circles is not something a healthy bearded dragon would normally do. Hopefully yours does not have a serious problem and you will soon be able to identify the cause and take appropriate remedial measures.

If you need help to ascertain whether your beardie is spinning in circles due to injury, ear infection, incorrect temperatures, inadequate nutrition, toxic fumes, or the dreaded atadenovirus, please don’t hesitate to pay a visit to your nearest herp vet or professional bearded dragon breeder.

It’s worth taking any necessary steps to get your pet beardie back to normal so it can stop spinning in circles and enjoy hanging out with you again.