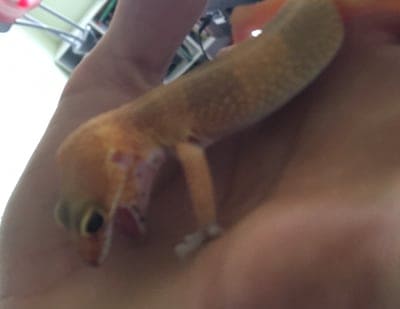 Sometimes the smallest animals can pack a real punch. Unassuming looking creatures can have serious bites, sharp claws, rough skin or even be venomous. If you are considering a leopard gecko for a pet you may be wondering if they have any painful surprises up their sleeve you should look out for. Do leopard geckos bite? Could a leopard gecko hurt you? Let’s dive into the truth about these little lizards.

Can leopard geckos hurt you?

No, leopard geckos are not capable of causing people real harm.  Leopard geckos do bite in certain circumstances, however they are not venomous, and have tiny teeth with weak bite pressure. Whether or not something hurts is very subjective and depends on your pain tolerance. However leopard geckos really do not have the means to cause injury that would require more than a band-aid, and even that is rare. The only things that have the potential to hurt are teeth and claws. Both of which are very small and unlikely to even make you say “owch”.

Yes leopard geckos will sometimes bite their owners. Getting bitten is probably one of the biggest fears new owners have. But fortunately for those who are worried, these bites really don’t feel like much. For many owners, the bite is described as “pressure” and some people have even stated that they hardly feel the bite at all. There are many animals out there that can clamp their mouths down pretty hard, but these geckos are not one of them. Most leopard geckos don’t have enough pressure behind their bite to hurt you and when it does happen, it’s more of a shocking experience than a painful one. 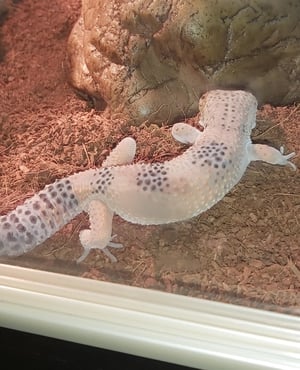 Although their bites don’t generally hurt, it’s still best to know when you might expect to get bitten so that you can avoid it happening altogether.

Here are a few examples of some of the times you’re most likely to get bitten:

As you can see, there are quite a few reasons why a leopard gecko might bite you. But if you avoid putting your hand near their mouths (with the exception of hand-feeding them) during any of these situations, then you should be able to avoid getting bitten. And don’t get the wrong impression, most leopard geckos are actually friendly pets!

Sometimes, as with hand feeding, they may simply mistake your finger for food. In the other circumstances listed above, it is mostly due to the mood of the gecko. If they are scared, feel the need to be defensive or are being aggressive, they are more likely to bite. Unfortunately, there’s not much that can be done about most of these things besides be cautious as leopard geckos are typically a little more irritable during most of the times that I mentioned. But for situations in which they feel spooked, when hand-feeding, or when dealing with two leopard geckos that just don’t seem to get along, then there are solutions.

How to Avoid Getting Bitten By A Leopard Gecko

One of the main ways leopard geckos get spooked is if you reach down from above to pick them up and they don’t see you coming. This can startle them and they will either hide, become extremely stressed out, or bite you.  For leopard geckos that get spooked easily this way, look into getting a tank that opens up from the front.  They’re almost the same as tanks that only allow you to reach in from the top, but because they allow you access to your gecko from the front, it gives your lizard the chance to see your hand before reaching into the tank. Front-opening tanks such as this great one from Exo Terra can really help with this.

To prevent this from happening, a better option is to use a tool to pick your insects up with instead so that you don’t have to do it by using your hands. Not all leopard geckos will bite when picking up insects from inside of the tank, but if you have one that does, a simple pair of long tweezers is an easy fix. Having something to grab your insects with will allow you to feel more comfortable feeding them if you’re worried that you might get bitten.

First thing’s first, if you’re someone who has more than one leopard gecko in a tank and you’re constantly having to break fights up between your lizards, then in order to avoid any serious attacks between your two geckos you’ll want to keep them separated.

Not only will doing this allow your leopard geckos peace, but it’ll also prevent you from potentially getting bitten while stopping the fights.  This may seem unlikely, but because leopard geckos who fight are usually in an aggressive state whenever they’re going at it, it’s easy for them to bite your finger by accident, or mistake it for another leopard gecko.

Leopard geckos who are put together in the same tank will sometimes nip at each other or show a little bit of aggression from time to time. That is normal and isn’t a problem as long as it doesn’t get overly aggressive or frequent. But if things get really bad and you catch them viciously going at it, then you’ll need a separate tank to put one of your leopard geckos in to stop the behavior. Doing this will not only benefit you but it’ll benefit your leopard geckos as well. 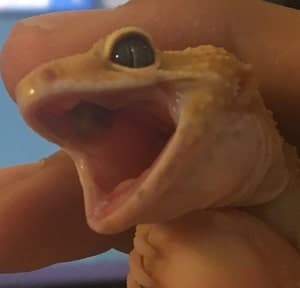 Despite what many have speculated about over the years, leopard gecko bites are not venomous and they more than likely will never require treatment because of how surprisingly weak they are. It’s true that leopard geckos have teeth, but because their teeth are so tiny, people say that even those are hardly felt because of how small they are.

There have been instances where leopard geckos have made their owner bleed after biting them, but keep in mind that something like that happening is extremely rare and is probably caused by leopard geckos that are much larger, like the giant leopard gecko.

With other smaller animals that bite such as snakes and hamsters, there’s more to worry about since a their teeth are sharper and their bites are strong enough to break through the skin. But when dealing with leopard geckos, they hardly ever have the pressure needed for causing any serious harm.

Also, keep in mind that a leopard geckos diet consists of nothing but insects, so because of that, they don’t have to use a lot of force to chew up their food. Yes, some insects that they eat have tough exoskeletons, but most of the time, they’re not nearly tough enough to require a ton ‘chewing power’. Gerbils and hamsters have teeth and jaws for chewing through tough food while cats and dogs are the same, but fortunately for us owners, leopard geckos don’t have this type of ability.

Wondering whether or not a leopard gecko has the capability to hurt you is a surprisingly common worry when it comes to these little lizards, but fortunately, it’s really nothing that you should be concerned about. You run the risk of being bitten by any caged animal or pet. But, if you don’t do things that will irritate that animal or bother them in times of stress, then chances are that you won’t get bitten. There are leopard geckos that are generally a little more aggressive by nature, but a lot of the time, they won’t bite unless provoked or in times where they’re very defensive or irritable such as when they’re going through a shed or sometimes even pregnancy. Just be mindful of the things that you do around your gecko, try not to bother them at the wrong times, and don’t stick your hand in the tank if food is dropped and you should be alright.