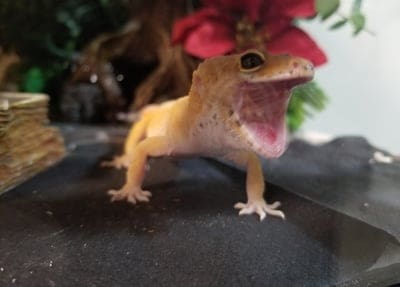 Honestly, when our leopard geckos fight, it’s very disheartening.  We’d like for them to get along at all times, but the truth of the matter is that sometimes that just isn’t possible when it comes to some leopard geckos.  Unfortunately, not much can be done about this behavior, but there are reasons why it happens and also ways that you can prevent it.   Read on to find out both.

Why do my leopard geckos fight?  They fight simply because they are lizards that are very dominant and territorial by nature.

Two or more males in a tank are more likely to fight compared to other gender pair-ups but despite this fact, all leopard geckos in one enclosure do have the potential of possibly going at it at some point while they’re together.  While some leopard geckos are able to tolerate other leopard geckos more than others, some simply just can’t. 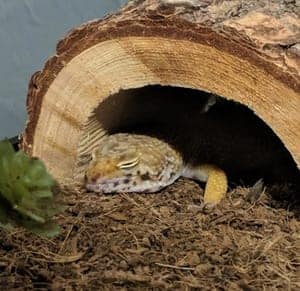 Leopard geckos are, in fact, known to fight when left in the same enclosure together but despite this fact, some owners choose to keep them in the same tank anyway in hopes that the geckos will resolve the issue on their own.  Sadly though, it doesn’t quite work that way.

As stated above, lizards are very territorial and very aggressive by nature.  So even though some of them may fight and then turn around and become calm for a certain amount of time afterward doesn’t mean that they will not go at it again in the future.

If the fighting continues between your geckos then one of them will eventually become severely injured or even worse, slain.  Housing leopard geckos together is fine but the fact of the matter is that some of them simply just do not get along and because of that, they cannot and should not share the same space.

Not only are the lizards subjected to physical injuries, but they’re also subjected to mental distress as well.  To give you a better idea of what I mean, take a look at some of the things you might see your leopard geckos going through due to fighting if they’re left in the same tank together:

Just like any other living creature, fighting takes a huge toll on the body.  Not only does it cause physical drainage but it also causes tons of stress as well.  And unfortunately for leopard geckos, there’s only so much of these two things they can take before they can’t take it anymore.

For many owners, there’s always hope that the problems will go away on their own.  But, because of how leopard geckos are hardwired, they won’t.

This may not be what owners who cohabit want to hear, but in order to stop your leopard geckos from fighting, you must separate them altogether to avoid further complications between the lizards.

This is because leopard geckos that absolutely cannot stand being around each other will fight endlessly, so it’s our job as responsible owners to make sure this doesn’t happen by giving them the space that they need by doing one of two things.

These two things include either rehoming the lizards or having the lizards be in totally separate tanks.  And for those who do, in fact, cohabit their lizards, you should already have another tank ready just in case situations like these happen where you have to make a quick separation.

It would be nice if all lizards who fight could eventually get along but unfortunately, this is usually never the case.  Owners who cohabit their leopard geckos a lot of the time end up losing their lizards because they don’t separate them quickly enough and it’s not only tragic for the owner, but for the leopard gecko as well.

If you’re someone who is currently cohabiting your lizards and you don’t have a backup tank, then I recommend taking a look at this one here over on Amazon.  Having another tank is absolutely essential for those who plan on having two or more lizards together, so be sure to get one now before it’s too late.

If getting a tank isn’t an option, then it’s important that you rehome one of your lizards so that you don’t risk anything bad happening to them.

A Bad Pair Up

Fighting amongst leopard geckos can happen no matter what the gender or age is but when it comes to males paired up with other males, this can cause a disaster to happen in your tank pretty quickly.

The reason for this is because males are much more territorial than females are and as a result, their ability to tolerate other lizards in their space is much lower.  This shouldn’t come as a surprise though because when it comes to almost any other living organism, including ourselves, males are usually always the more aggressive and territorial gender.

So, if your leopard geckos are fighting and they’re both males, then that’s likely why.  Females can go at it as well but they’ve been known to tolerate other lizards in the tank a lot more than males do and because of that, they’re the best gender to have in the tank together with minimal chances of aggressiveness and animosity.

Another bad pair up to have is any gendered gecko with a baby.  Naturally, you would think that all offspring are treated with the same care and attention as other living organisms such as ourselves and many other creatures in the animal kingdom but when it comes to leopard geckos, this isn’t the case.

Leopard geckos are great at protecting their young while they’re still in the egg but as soon as they hatch, it’s every man, or woman, for themselves.  Again, leopard geckos are very territorial, so when an adult gecko is paired up with a baby, even if it is that geckos offspring, they will harass and harm the baby until it eventually passes away.

It seems harsh, but unfortunately, that’s how leopard geckos operate.  If you want to avoid that from happening if you’re a breeder or if you’ve accidentally ended up having babies without plans of actually breeding then, again, you will need separate tanks.

Leopard geckos live purely on instinct, so sadly, they don’t feel any emotion towards any other lizard even including the ones that they’ve birthed.

As stated above, when it comes to fighting geckos, the best things you can do is rehome or separate the lizards altogether.  But, if your geckos are fighting with each other every now and then and it’s not at the point where it’s excessive, then getting a larger tank may help stop the fighting from continuing on.

The reason this helps is because a lot of the time, leopard geckos will go at it because there’s not enough room in the tank for them to stay out of each others way and as a result, they start to fight.

If you get a larger tank that allows you to give your leopard geckos their own equipment so that they’re not constantly fighting over the equipment that’s currently in your tank, it’s very likely that there won’t be any issues simply for the fact that they’ll have access to their own things.

When two or more leopard geckos are sharing the same hides, water bowl, food bowl, calcium dish, and everything else, it’s easy to see why the fighting would occur.  When they’re given enough space and equipment to where they’re not constantly running into each other, there won’t be as much for them to fight about or be territorial over.

If you’re interested in a larger tank that will allow you to give your leopard geckos that type of space, then click here to go to one that’s 40 gallons large on Amazon.  It’s not guaranteed that your leopard geckos will still not fight with each other in a tank like that, but it does minimize the chances of them doing so very greatly. 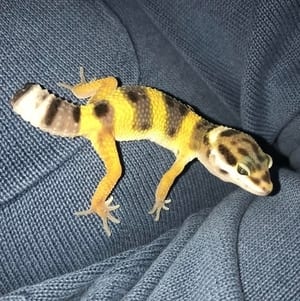 While owners who cohabit don’t ever anticipate that their leopard geckos might eventually end up going at it, sadly, it happens a lot.  Cohabiting gets a bad rap because a lot of owners are unprepared when situations like these happen but fortunately for you, you don’t have to be one of the owners.

Before cohabiting, it’s important to always either have a backup tank or multiple tanks depending on how many leopard geckos you have, one large tank to minimize the chances of your leopard geckos running into each other, or the readiness to potentially end up getting rid of a lizard if you don’t have the tanks to properly separate them.

Cohabiting can be easy but in order to successfully pull it off, you must be prepared and educated so that you can avoid any casualties at all costs.  If you’re a new owner, it’s best to start off with one lizard to get the feel for how to care for them first and then get another once you know how everything works.

Leopard geckos are not hard to care for, but when it comes to having multiple at once, things can get a little challenging when you don’t have the experience for how to properly care for them first.