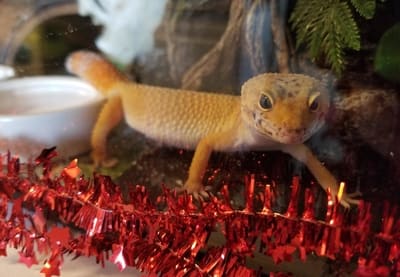 For those who don’t know, leopard geckos who have never been around a male can and will sometimes hatch infertile eggs from time to time and even though that’s normal, it’s even expected amongst some owners.  What’s not expected though is buying a leopard gecko, owning it for 11 months, and then watching it lay fertile eggs without ever being sexually active.  Here’s how that can happen.

Can leopard geckos retain sperm?  Yes,  they can.  In fact, they can retain it for up to one year after mating with another leopard gecko.

It’s not heard of very often, but there have been cases where owners have bought their lizards from breeders or private sellers and then a year or so later, their leopard gecko ended up dropping fertile eggs.  While that sounds shocking, it is something that is very possible.  Because this is a possibility, it’s best to stay prepared in the case that it somehow happens to you.

Sperm Retention Can Cause Confusion for Breeders

Breeding in itself can be pretty difficult when you have little experience doing it, but if 2 males mate with your female around the same time and you don’t know about it, this can make everything that much more difficult.

The reason for this is because not only can leopard geckos retain semen from one male, but they can retain it from another male as well.  Because of that, the chances of your female birthing the morph that you want is very unlikely as they don’t have control over which geckos semen will fertilize their eggs.

If you’re a breeder and you want to avoid this confusion, stick to one male when breeding.  Owners can achieve the look they’re going for when it comes to breeding, but unfortunately, you have to wait between seasons before you can get it.

Breeding would be easy if you could just mate multiple males with one female and hope for a cool looking morph, but sadly, it’s not that simple.

When buying your lizard from a private seller or any other place that may have kept male and female leopard geckos together at one point or another, you never really know what you’re getting yourself into if the seller doesn’t give you a background of how the gecko your buying has been cared for while in their possession.

Because of this, it’s better to be safe and get yourself a place to put your leopard gecko’s potential babies at instead of being sorry later on down the road when you find out that they’re gravid and then not having a place to put the geckos.

That said, I recommend getting a tank like this one here from Amazon to put them in.  Gravid leopard geckos who birth baby geckos are very territorial against them once they’ve hatched.  So if you plan on keeping the babies or are just wanting to separate them temporarily until you find a home for them, then having an extra tank will be what you need to do just that.

Also, because there’s no way to check if your leopard gecko’s eggs are fertile or not until they’ve hatched, inspect them to make sure that they are before disregarding them as being infertile.   A lot of the time, leopard geckos will lay infertile eggs and this is normal, but because they can retain sperm for so long, it’s better to be safe than sorry by checking.

The way you’ll want to check is by shining a bright light facing towards you on the bottom side of the eggs and then seeing if you spot a pink or reddish color coming from each one.  If you do, then that’s how you know that the eggs are, in fact, fertile.

If they don’t show up that color, then it’s likely that they’re not.  When they’re infertile, the only color you’ll see is a pale yellow one with no pink or red in it. 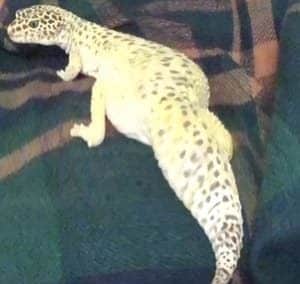 The interesting thing about leopard geckos is that not only do they have the capability of storing sperm for up to a year, but they’re also able to use it to fertilize their eggs until all of it’s used up as well.

While this can be good for breeders, it can be a nightmare for those who either don’t want to breed or want their leopard gecko to stop laying eggs because of how many they’re able to drop.  Once your leopard gecko has mated with another male, unfortunately, there’s no way to stop your female from laying eggs until there’s nothing else to fertilize her eggs with.

Females can lay up to 16+ eggs per breeding season so if you’re not a breeder or don’t want to have your leopard gecko birth that many eggs, it can start to get a little overwhelming because of all the care that goes into having that many geckos.

With that said, before buying a leopard gecko from anyone, ask the seller about the history of the gecko that you’re purchasing.  A lot of the time we get excited and don’t think to ask questions when buying new leopard geckos but because not doing so can cause a ton of trouble for you down the road, it’s best that you do.

Also, because males reach sexual maturity 3 months before females do, it’s very possible and actually pretty likely that your male will get your leopard gecko pregnant without you even knowing it if you house them together.

Male leopard geckos become sexually active at 6 months of age while females become active at 9 months so having them in the same tank together if you do in fact cohabit can give you an outcome that you might not be looking for.  And despite their young age, even younger leopard geckos can retain sperm for quite a long time.

Just remember that when housing two leopard geckos together of the opposite sex, all it takes is one time mating before you end up with many clutches on your hands due to sperm retention.

If your leopard geckos mated and you didn’t plan on breeding than you’ll either need to buy a lot of tanks to separate the babies you’re about to have, sell the babies, or sell the female who’s gravid before she drops her eggs.

Most owners who don’t plan on breeding almost never keep the babies after they’ve hatched, so if that’s what you decide to do, then that’s totally fine.

Leopard geckos can drop an incredibly large amount of eggs within a breeding season, so for those who aren’t heavily experienced breeders, it’s best to make your plans for who you’re going to give your leopard geckos babies to as soon as you realize that they’re gravid.

The very last thing you want is to have a bunch of babies with no extra tanks to place them in or nowhere to take them, so don’t wait until the babies are born first and advertise your unborn geckos anywhere you can.

Social media, Craigslist, the newspaper, and even flyers are good ways to let people know that you’ll be having baby leopard geckos for sale whenever they’ve hatched.  If you advertise anywhere you can, it’s only a matter of time before someone contacts you.

It’s a shame that you have to get rid of your geckos, but for each new gecko, you will eventually need a separate tank for all of them plus all new equipment and that is something that most people aren’t ready for.

Most leopard gecko owners know that leopard geckos can store fat, nutrients, water, and pretty much anything else they can consume into their tails, but what a lot of them don’t know is that they can store sperm as well.

Although this is a cool ability that they have, it can be a nightmare for owners who don’t plan on breeding.  As stated above, leopard geckos can lay up to 16 eggs per breeding season.  So if the last owner you bought your female gecko from accidentally paired her up with a male, it’s likely that you’ll have a lot of baby geckos to deal with in the near future.

If you plan on keeping them, make sure you have the right amount of tanks for your new geckos.  If not, then plan in advance where you’re going to take them so that you’re not stuck with a whole bunch of geckos in one tank.

Not only is this uncomfortable for the geckos, but it’s also very unsafe for them as well.