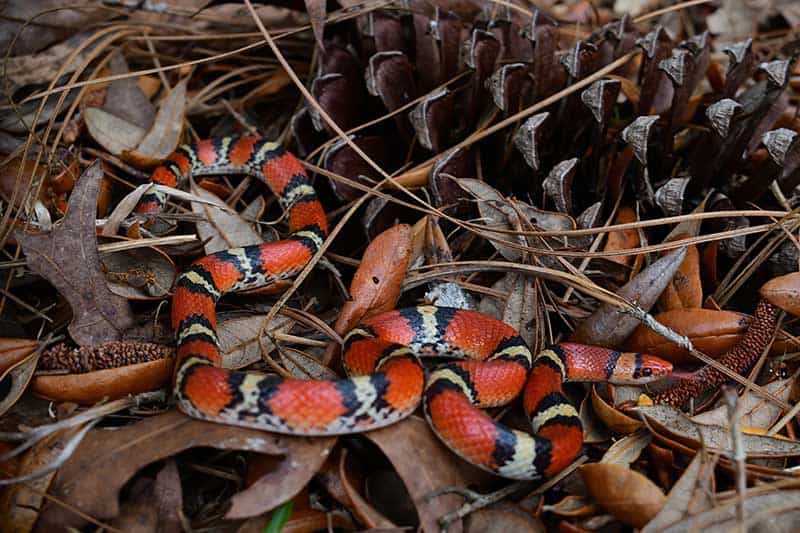 Coral snakes are very colorful, yet highly venomous snakes. North American varieties have yellow or white stripes that will always surround their coral-red bands. They do not have triangular shaped heads like most other venomous snakes, and most grow to less than four feet in length. There are actually many different coral snake look-alikes out there, which is what we’re talking about in this article. Simply having similar coloring and appearance to one of the most dangerous animals on the planet is a good defense mechanism in itself.

“Red on black friend of Jack. Red on yellow kills a fellow.”

If a snake’s red bands are bordered by black, then it is non-venomous. Anything other than that, steer clear.

One of the most common coral snake mimics is the scarlet kingsnake. Also called the scarlet milksnake, this species can be found from eastern Canada to northern Mexico and grows up to four feet long.

It’s usually black with red bands that have yellow edges or white bands that have red borders. The red and yellow bands never touch. Its head may be either black or brown depending on its geographical location, and it has an underside that varies from grayish-blue to bright yellow. In some regions, they are considered an endangered species and are protected under law.

This scarlet snake has similar markings as the scarlet kingsnake and has black stripes outlined in white. Some people own these as pets.

These milksnakes can be found in the eastern United States from Maine to Michigan, southern Canada down into Texas. They’re usually located near lowland streams, creeks, marshes, and other wetlands.

The Texas scarlet snake is found from southwestern Louisiana and eastern Texas to southern Oklahoma. They can get big but usually stay around four feet like the other ones. They have similar black and red stripes outlined in white chunks that separate the black and red sections.

The head of this species usually ranges in color from brown to black, depending on geographical location. Out of all the coral snake pretenders, this species is the most secretive and not often seen making it difficult to find good pictures of them.

The Sonoran shovel-nosed snake, as an example, has large black and red bands separated by thinner yellowish bands. If you are familiar with the color patterns of coral snakes then these snakes can easily be distinguished from them, but if you aren’t then the bright colors can look quite similar. The coloring and appearance of other shovel-nosed snakes may vary greatly.

The Western milksnake, also called the Central plains milksnake, is a coral snake look-alike with a banded pattern throughout the United States. The base color for Western milksnakes is usually black or white with bands that are supposed to be red (always sandwiched by black). The red bands can also appear in different shades of pink or orange.

The central plains milk snake is found in states like Texas, Oklahoma, and Colorado. They occur in spotty populations throughout much of the central-western United States.

The Eastern milksnake is found throughout much of the Eastern United States. They’re common from Maine to Tennessee to Wisconsin, and everywhere in between. They have a light base color and are banded with red, black, and white stripes.

The Louisiana milksnake is a coral snake mimic found in the Southeastern United States and South America. The snake’s colors are usually bright similar to coral snakes, and black, with pink, red, or bright orange bands. They also have yellow and white rings on their tails.

Mexican milksnakes are found in Mexico, primarily in forested or peri-urban areas. The Mexican milksnake has a black and white banded pattern with spots on the back of its head.

The red milksnake is a coral snake look-alike that’s mainly found in the Midwest of the United States, being spotted as far west as South Dakota and as far south as Alabama. Red milksnakes have red blotches bordered by black, separated by gray-cream sections down both sides of their body. These snakes feed on lizards, amphibians, and small rodents.

The Utah milksnake has hourglass-shaped red, black, and white patterns on their skin. They also have a brown or pinkish body with rust to off-white bands that are usually less intense than coral snake patterns. The head is also much brighter than coral snakes’ heads. This species is primarily found in Utah.

In the wild they feed primarily on small mammals, birds, or eggs but may also take reptiles and amphibians. Females will lay 10-15 eggs at a time that hatch in around 60 days.