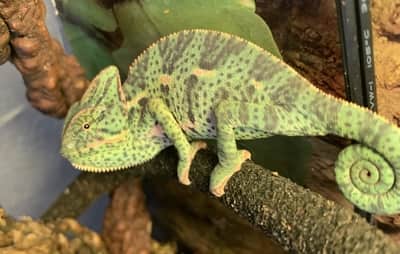 For most people, music is a huge part of their lives, and they love sharing it with others. You may be wondering whether your pet chameleon may enjoy listening to music, or if it can even hear it since it has no visible ears.

So do chameleons like music? While they don’t necessarily like music because they can’t hear in the way that humans can, chameleons can sense vibrations and listen to music that way.

In this article, we’ll go over the anatomy of chameleons’ ears, whether the sound of music will irritate your pet, what noises chameleons make, and how their other senses work.

Do Chameleons Have Ears?

As a chameleon owner, you’re probably pretty familiar with your pet’s appearance and general anatomy. This means you know that your chameleon doesn’t have any organs that resemble a typical set of ears.

But this doesn’t mean that your chameleon is deaf! Its method of hearing is simply different from what you’re used to. While chameleons don’t have eardrums or ear openings, they do have a bone called the quadrate bone which allows them to take in and interpret vibrations.

These lizards also have two microscopic holes, one on each side of their heads near their eyes, which take in noises, but only at certain frequencies. These “ears” don’t work very well, though, so chameleons are often forced to use their other well-developed senses.

Chameleons have the worst hearing of all lizards; the range of tones they can hear only covers 200 to 600 Hz. When chameleons are communicating amongst themselves, they use low-toned growls that can easily be interpreted by others of the species.

However, you most likely wouldn’t be able to hear this communicative growl, although you’d be able to feel its vibrations if you were touching or holding your pet. 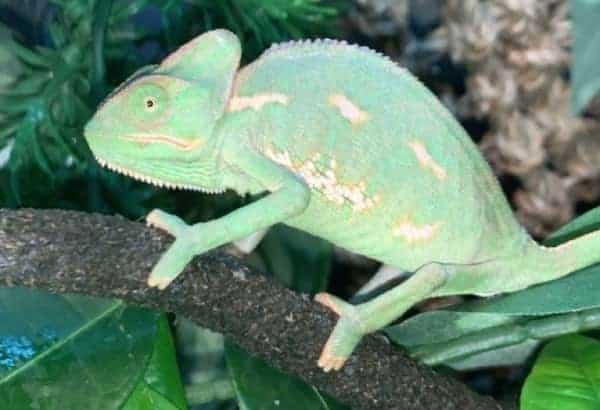 Will Loud Music Bother My Chameleon?

There’s no straight answer to this question; whether music bothers your chameleon depends on both your pet’s personality and the frequency of the music you’re playing. Music with lower frequencies and lots of bass will be more audible to your chameleon than high-pitched music.

Just be sure to observe your chameleon’s reactions to any music you choose to play, and turn it down if they show signs of stress.

Some chameleon owners report playing loud, high-pitched music causes them to stand up on their hind legs, but most say that their chameleons don’t seem to notice the music they play at all unless it’s extremely loud.

Other chameleon owners warn against playing music with low pitches because the vibrations can signal danger to your chameleon–in the wild, sudden vibration could mean that a predator is shaking the tree that the chameleon is sitting in, and it now must find a way to defend itself.

You definitely don’t want to stress out your pet, so just be observant of how they behave when you play music and handle the situation accordingly.

Does My Chameleon Hear Me Talking?

Again, it depends on the frequency of your voice. If it’s between the range of 200 to 600 Hz, then yes, your chameleon can sense the vibrations your voice creates. But as far as understanding words and phrases, that’s just not how chameleons’ sense of hearing works.

Do Chameleons Make Any Noises?

Yes, they do! Although their sense of hearing isn’t very refined, making sounds can be useful in nature and in captivity. If you have a pet chameleon, you might hear these noises:

What About Chameleons’ Other Senses?

Since chameleons’ ears function in a very different way than we’re used to, you may be wondering how their other senses work.

Chameleons have an absolutely amazing sense of sight! Thanks to their unique eye anatomy, they have 360 degree vision and can see in front of and behind them simultaneously. This is due to two factors: one, their eyes are able to rotate freely, and two, chameleons can see with each eye independently as well as together.

Chameleons can switch between monocular and binocular vision at will, which also gives them the ability to see panoramically. This all comes into play when these lizards are hunting their prey.

When they’re scanning the area looking for a meal, they use monocular vision, meaning that their eyes work independently of each other. Two different images are sent to the brain as the chameleon takes in information from each individual eye.

But once the chameleon zeroes in on some prey, the eyes work together, using binocular vision to combine information from both eyes into one cohesive image. Both eyes lock onto the prey, and the chameleon is ready to strike.

Chameleons’ eyes are very well-protected. First, when their tongue shoots out, their eyes automatically close to protect against any possible damage their prey could inflict. When chameleons sleep, their eyes roll down so that their pupils are actually covered by a protective bone. And finally, their eyelids are covered in scales.

The sense of smell in chameleons is not very strong. Although chameleons do have two nostrils at the front of their head, these are mainly used to breathe. They can also be used to take in smells, but aren’t well-developed in this way. 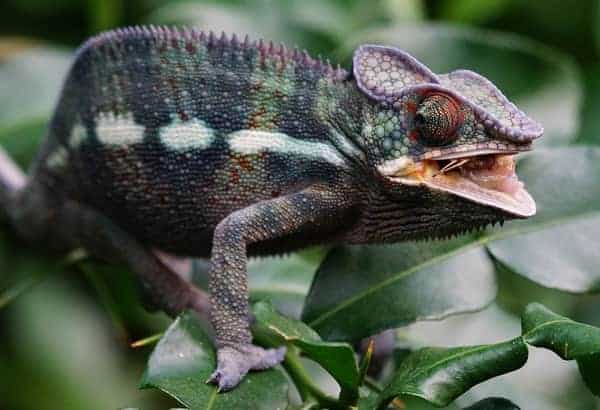 Chameleons can taste sweet, sour, and bitter flavors. They enjoy licking dew off of leaves rather than drinking water. They’ve often been observed licking branches to see if the territory is vacant or occupied.

Although not much research has been done concerning the taste buds of chameleons, it’s been theorized that taste is relatively important to them as they get excited for some foods and reject others.

Experts report that the parts of a chameleon most sensitive to touch include the tip of their tail, along the spinal column, and around the corners of the mouth. The tail is prehensile, which means that it’s adapted over time to become a great tool for climbing and gripping. It’s almost like a fifth leg!

It can be difficult to determine whether or not chameleons enjoy music when you’re not even sure if they have ears! Chameleons don’t have what we would consider a normal set of ears, but they do have microscopic holes near their eyes that take in vibrations, which are then interpreted by a bone called the quadrate.

Unfortunately, there isn’t a yes or no answer when asking if your chameleon will enjoy music or be bothered by it. It’s more of a case-by-case situation in which it’s important to observe your pet’s behavior when you play music in order to gauge its reaction. As long as your chameleon remains calm and doesn’t show signs of stress or aggression, you should be perfectly fine playing music around them.

As to whether or not your chameleon can hear you talking, it can–but only if the frequency of your voice as you speak falls between 200 and 600 Hz. Chameleons have a very limited range of frequencies that they’re able to hear. However, this is definitely made up for by their amazing 360 degree eyesight.

While chameleons can’t hear many sounds, they’re still capable of making their own! You’ll often hear rustling sounds as they move about in their enclosure, as well as sighs and sneezes. Hissing is a common way to express anxiety or aggression, while popping or wheezing is a sign your chameleon is suffering from a respiratory infection. Finally, your pet is capable of hooting, but you likely won’t be able to hear it because it’s done at a very low-level frequency.