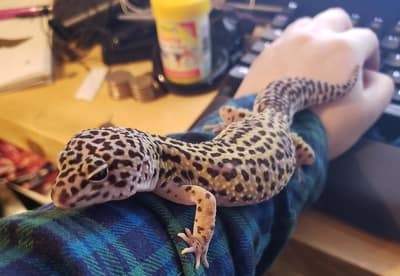 Leopard geckos are sweet, loving, and caring.  But before they get to that point, there’s usually a stage in which they’re not so sweet and loving until they get used to you.  This stage usually happens when first bringing them home and can take some time to get past it, but with enough commitment, it’s worth it.  Do they get attached once they get used to you though? Let’s find out.

Do leopard geckos get attached to their owners?  No, but they do start to recognize you’re scent the more you’re around them.  This is why owners who have owned their leopard gecko for a very long time have gotten attacked when wearing a new cologne or fragrance, for example.

It may seem as if a leopard gecko could get attached to you by the way they behave around you once they’ve had enough time to realize you’re not a threat.  But really, they’re likely just used to the natural scent that you carry instead.  Don’t get me wrong, they still love you, their attitudes can just change greatly simply from you just changing your scent.  With that said, let’s learn more. 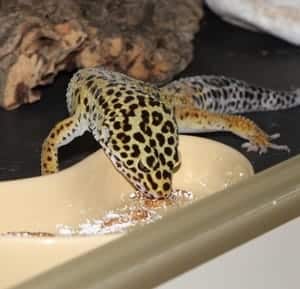 In order for you to get them to become attached to you, you’ll first need to gain their trust.  Gaining their trust isn’t very hard to do, but it can be time-consuming.  So make sure you understand that before anything so that you’re not disappointed when the results that you’re expecting don’t come fast enough.

With that said, there are a few things that you can do to make your leopard gecko become more “attached” to you.  These things consist of making identifiable sounds that they can associate you with whenever you’re near, feeding them, and making sure you’re doing everything in your power for making sure they’re staying stress-free.

In order to know exactly how to do that, check out this article here where I go into a lot more detail on how you can do each one in a more in-depth way along with things that you’ll want to avoid doing when earning their trust as well.

For me, this was the most fun part of owning my leopard gecko.  It was challenging at times but with enough patience and commitment, all the work I put into my gecko paid off just as it will for you too.

You may not know this, but leopard geckos don’t even trust their own babies after they’ve hatched.  So the fact that us owners are able to earn it is more than an honor to have.

Believe it or not, but the type of enclosure you choose to put your leopard gecko in does play a big role in earning and keeping their trust.  The reason for that is because leopard geckos are naturally skittish lizards and will treat anything that they can’t see or are familiar with as a threat.

With that said, it’s best to not do what a lot of other leopard gecko owners have done and get a tank that only opens up from the top.  These types of enclosures may seem harmless, but if you look at it from a leopard geckos point of view, you can see why these enclosures can be a problem.

When you reach in from the top, they can’t see you coming.  Although you’re completely harmless and come in peace, they think that you’re a huge animal reaching down to grab, eat, or attack them.

That may sound silly, but as I’ve stated before, leopard geckos operate from instinct only and don’t know the difference between what’s a threat and what’s not a threat and as a result of reaching down opposed to reaching in from the front, you could repeatedly get attacked, cause them tons of stress, and could lose a lot of their trust and therefore they’ll be less attached to you.

In order to avoid this, you’ll need a tank that opens up from the front.  That way, they’ll see you coming every time you go to pick them up or feed them and they won’t be spooked out whenever you reach in the tank.

If you’d like to know the one I have my leopard gecko in, then check it out here on Amazon.  Causing them stress is a sure way to decrease the chances of a leopard gecko of living a long and healthy life and could cause problems between you and them by making them fear you every single time you try to give them attention or even feed them.

So if this is something that you want to prevent in the short term and long term, then I suggest getting a tank that opens up from the front.  As owners, we want them to become “attached” to us so that it makes it easier on us to care for them, and if we don’t have the right equipment to achieve that, caring for them can become very difficult for as long as you own them.

On top of losing trust, stress is very detrimental to their health because it weakens their immune system and causes them to not want to eat.  So if you thought that things couldn’t get any worse, they can.  Not only will they not trust you, but they could become sick more easily, aggressive, more difficult than usual to care for, and overall behave in a way that they shouldn’t be behaving in.

You could do everything right to get them to be on your good side but if you’re constantly scaring them by reaching your hand in from the top, then all of your hard work could be for nothing, and I know that’s not something that any leopard gecko owner wants to go through.

What Not to Do 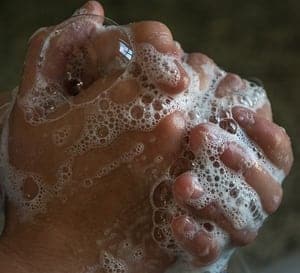 Yes, leopard geckos can be very affectionate and loveable once they get to know you.  But, because their main way to identify you is through their sense of smell, it’s best to wash your hands off with non-scented soap before reaching in to grab them so that you don’t get attacked.

A leopard gecko can get attached to you and know you for many years, but if you put your hand near them and you don’t smell like you usually do or what they’re used to smelling, then they may act out in an aggressive way and bite one of your fingers out of confusion that you may be a predator.

With that said, it’s important to make sure you’re never doing this.  Not only will you potentially get attacked, but you could even lose their trust as well.  That might not seem like a big deal, but getting them to trust you can take quite some time and isn’t something that’s very fun to deal with when it happens.

Lost trust can result in further attacks, fear for your leopard gecko which in return can cause stress, and an overall more difficult time caring for them due to not having a strong enough bond anymore.

I’m not saying that you’ll lose their trust just after one time of doing this, but if they consistently see you as a threat time and time again then there is a good possibility that the bond that you and your leopard gecko have could suffer a little bit as a result.

Relationships between owners and leopard geckos can be very strong, but at the same time, they can be broken over the smallest things as well.

Once your leopard gecko becomes attached to you, they’re essentially trusting you with their life because they see most of everything as a threat.  So make sure you’re not doing anything to lose their trust or else they might start behaving differently towards you.

Leopard geckos respond best towards positive repetition, so if you do things that make them consistently happy over and over again and doing what you can to make sure they’re not subjected to stress then there’s no doubt that in time they’ll become very attached to you.

Does that mean that once you get them to trust you that they’ll trust everyone else that’s in your household as well?  Absolutely not because it takes time for them to get used to even one person’s smell, voice, and affection.

But, it’s a starting point and over time if you decide that you want to introduce new people into their life then you’ll have the tools and knowledge to do so.  In addition to positivity and repetition, patience, commitment, and the right equipment will be just what you need in order to successfully earn and keep their trust for many years to come.

Getting an aggressive leopard gecko or one that hadn’t been trained to trust you properly can be difficult to get them to change in the long run if the proper training steps weren’t given from the very beginning.

So keep that in mind when bringing one home and caring for them so that you don’t end up facing a ton of unwanted challenges with your leopard gecko now and in the future.