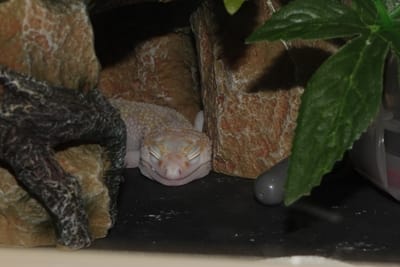 We all know that feeling.  That feeling when there’s absolutely nothing to do, so you try to force yourself to do something in hopes that the boredom will go away such as reading a book, playing a game, or even just watching videos on YouTube. But sometimes, all of it is never satisfying enough to get you out of that slumber of being bored.  If you’ve ever experienced this feeling, then you know how badly it sucks. And sometimes late at night when we’re unwinding and relaxing from a long day at work or school, you might glance over at your gecko while it just lay there with little to do and think, do they ever feel that way as well?

With millions of reptile owners, I wouldn’t be surprised if this question was one of the most commonly wondered about questions out there.  We might think, well, if we get bored, then they must get bored, too.  And who knows, maybe there are reptiles out there that do, in fact, get bored.  But when it comes to leopard geckos, they aren’t one of them.  Although they don’t get bored, they can become stressed, which in turn may seem like bored behavior.  So here are things that you can do, and that they do naturally, that allows them to keep themselves occupied, happy, healthy, and stress-free. 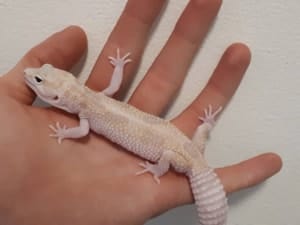 Not only will bonding help you build a closer relationship with your gecko, but will also give them something to do besides lay around all day.  If you’re a new leopard gecko owner and you want to know how to bond with your gecko the right way, then I highly suggest you click here to read a more in-depth article on how you can do so.  Bonding is very important, especially the first 1-2 months of having your gecko, so that article should help give you everything you need to know as a new gecko owner.

If you’re not a new leopard gecko owner, then you should already know how important it is.  Taking your gecko out of its tank every once in a while and holding it, talking to it, and even letting it crawl on you will help keep and further grow that relationship that you’ve spent so much time building over the duration of your gecko’s life.

Bonding will not only allow you to build a closer relationship but can also be a great stress reliever if you’re gecko is feeling a little under the weather as well.

When you really think about it, leopard geckos aren’t too different from us.  In order to live a healthy life, they need food, water, and a little exercise so that they can feel better about themselves.  Although this is a little bit of exercise mixed with a little bit of entertainment, it’s still exercise nonetheless.  It’s just fun exercise.

But, although this may sound really simple, letting your leopard gecko run around in the bathtub is a great way to give them a bit of freedom and opportunity to work their body out.  In the tank, they can’t do a whole lot of running.  It’s usually just not big enough.  But if you let them out for a while to run around in the bathtub, then they will have plenty of space to stretch those legs out.

If leopard geckos had feelings like us, then they would definitely be happy about being able to get out of the tank for a bit and exploring something that’s bigger than what they’re used to.  But in the meantime, we don’t want to have them in a terrarium that is too cramped up for them to move around in.

And I let my leopard gecko out often, but with this large and roomy tank I can ensure that they’re getting an incredible amount of roaming space until I do decide to let them come out and play for a bit.

Just like us, leopard geckos need sleep.  Sleep is a very important part of life and without it, we pay for it later.  If your gecko is not getting enough sleep, then they may end up becoming sleep deprived and begin acting sluggish, tired, and just crappy in general.

Usually, leopard geckos don’t have a whole lot of trouble falling asleep like us humans do sometimes, but if there is something in their tank that is bothering them or if the tanks living conditions are poor in general, then this can very well cause a lot of stress and, therefore, a lack of sleep, causing your gecko to not act normally. 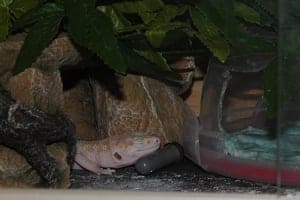 You may be thinking, ” well, what could cause a leopard gecko to lose sleep? ” (I assume you’re thinking that at least) and the truth is that there are multiple factors that could cause your gecko to be unable to sleep.

A common cause is crickets.  Yes, the same ones you feed them.  If too many crickets are left in your gecko’s tank and they are either not hungry or too slow to catch them as they’re bouncing around the tank, then sleep loss can happen to your gecko from being bit by the crickets so much.

For humans, cricket bites will rarely ever be strong enough to break the skin or be that noticeable.  But for leopard geckos, this can be a painful nuisance.  Especially if they’re trying to sleep.  So remember that when you’re feeding them at night before you go to bed, do not just let out a bunch of live crickets for them to eat without your supervision.

They will not only cause a loss of sleep the next day from staying up all night trying to fight off crickets, but they can also cause infections from all of the bites.  That’s like camping in the woods with the tent open with no mosquito repellent and no clothes on.  It’s not pleasant.

Another cause of a sleep-deprived leopard gecko is unbalanced tank temperatures.  If the tank is not set to the right temperature, this can cause all kinds of different issues for your gecko, and one of those issues can be a lack of sleep.

This should go unsaid, but I think eating is the way to everybody’s heart.  Manually feeding your gecko is apart of the bonding process when first getting them. So, with that said, you should already know that it’s a very powerful way to make your gecko feel better and build trust between the two of you.

Not only that, but geckos need certain nutrients and vitamins in order to survive.  So as long as you keep them occupied with a healthy, calcium-packed meal whenever they get hungry, then you will surely have a happy and satisfied gecko.

Without the proper food and nutrients, your gecko can become very sick and sluggish, which can be mistaken for boredom.  So, make sure that their meals are loaded with whatever their body needs and this will in return assure that your gecko is healthy and stress-free. 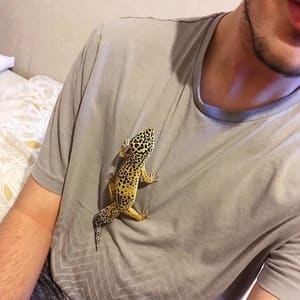 Unlike other geckos, leos don’t have suction cup feed that will allow them to climb up things (which is good because they love to try and climb the glass), so, fortunately, they can’t climb their way to the top of the tank where they could potentially fall and injure themselves.  But, what they can do is climb rocks and other little obstacles that you might see around in pet stores whenever you’re out shopping or surfing the web. For example they love rock dens.

To give your leopard gecko something to do, you can get them something such as a climbing rock so that they can exercise a little movement every now and then.  Leopard geckos really enjoy interacting with objects that are in the tank, even objects that are bad for them, so make sure to get something that will be fun for them to play on, but safe as well.

Leopard geckos don’t get bored, but that doesn’t mean they don’t like having the freedom to leave the tank for a while, bond, and play with accessories that are in their tank.  Leopard geckos have a very basic brain, and that brain tells them to eat, stay safe, and get the sleep that they need to be up and fully alert.

They don’t show signs of boredom, but they do show signs of stress, so making sure you provide them with all their necessities will make them content enough with their life without the need to be constantly played with or paid attention to.

Leopard geckos don’t mind if you handle them if they trust you, but too much handling can actually cause stress and, therefore, make your leopard gecko unhappy.  And happiness is the main thing that any reptile owner, especially leopard gecko owners, should worry about.

Their happiness is their entertainment.  So, instead of thinking about what you could do to make them not feel so bored, try to be more focused on making sure their tank temperature is right at all times, they’re eating when they should be, and getting a little freedom out of the tank every now and again and you’ll never have to worry about them ever being bored again because it’ll all work itself out with the proper love and care.