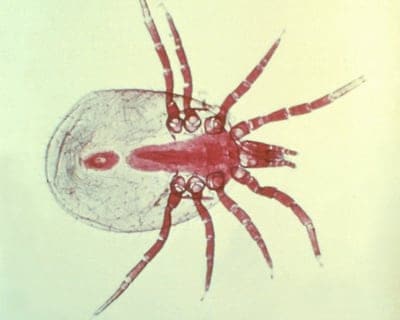 We know that leopard geckos like insects, but when it comes to this specific kind of insect, probably not so much.  Mites not only cling onto different reptiles but they also cling onto humans, dogs, cats, and pretty much anything else they can sink their teeth into.  Luckily though, with the right steps, they can be taken care of.  Having said that, let’s get right into it.

Do leopard geckos get mites?  Yes, they do.  Fortunately, though, they can be treated with a little work from the owner by sterilizing equipment and replacing anything in the tank that’s easily replaceable such as substrate.

Mites aren’t something that any leopard gecko owner wants to go through but unfortunately, it’s something that happens to the best of us.  It’s not the end of the world if your leopard gecko has them, but you will need to be very thorough with how you clean your tank in order to get rid of them.  If you’d like to know how to do that, then I suggest reading on for more information. 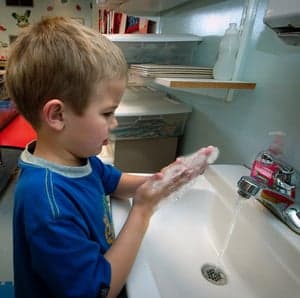 Because mites can be so hard to treat and can spread from reptile to reptile fairly easily if you’re not careful, it’s best that you’re doing everything you can so that your lizard doesn’t ever end up getting them in the first place.  In order to achieve that, there are a few things that you’ll need to do.

The first thing is to sanitize and clean your hands off after touching any reptiles other than your own before going back and handling your leopard gecko again.  This could include a friend’s reptiles, a family member’s reptiles, or reptiles that you may have picked up at an expo or pet store.

Although we may trust these people, you just never know what their pets have come in contact with before picking them up.  Not only that but because mites are so small, it can be hard for other people to know whether their reptiles have them or not.

Another way to prevent mites is to thoroughly inspect any reptiles that you plan on bringing home whether that be from an expo, a reptile shop, or a private seller.  This isn’t only to make sure that you’re not bringing any mites home but to ensure that you’re not spreading any to any of your other reptiles as well.

Getting rid of mites on one reptile is tough enough so if you don’t check the reptile you’re bringing home and then that reptile spreads it to your leopard gecko or any other reptiles that you may have, you’re going to be in for one of the biggest rides of your life trying to get rid of all of them.

If you’ve determined that the reptile you want doesn’t have mites then the next best thing you can do is to quarantine your new reptile from any of your other pets before cohabiting or putting them in the same room as your other reptiles.

To do that, you will need a separate enclosure that’s stationed in another room with your new reptile in it for 2 months to ensure that they don’t have any mites that you may have missed when inspecting them from wherever you got them from.

After 2 months have passed and you don’t see any mites anywhere on their body, water dish, or paper towel substrate, then that’s when you’ll know it’s safe for you to introduce them to your other reptiles.

If you’re in need of another enclosure then I recommend checking this one out here from Amazon.  It’s the one I’m using right now and my leopard gecko absolutely loves it.

How to Know If They Have Them

Reptile mites can sometimes be very hard to spot due to the fact that they’re so small but because there are ways out there to tell if they have them or not, I want to share these ways with you so that finding out if your leopard gecko has them will be a little bit easier.

That said, the first thing you’ll want to do is to replace your current substrate with paper towels.

If your leopard gecko already has mites and you know that they do then this part isn’t necessary, but laying down paper towels will not only make the mites more visible to you, but it’ll also prevent them from burrowing into any loose substrate that you may have and therefore making it harder on you to treat and exterminate them from your tank and leopard gecko.

If you don’t know what mites look like yet, then basically they’re very similar looking to a speck of black pepper or a single dot from a black ink pen.  They can be quite hard to see but if you put white substrate down like paper towels, spotting them will be a lot easier.

I always recommend Eco Earth as my go-to substrate amongst others but in situations like these where you suspect that your leopard gecko might have mites, I suggest you just stick to paper towels as this is one of the only substrates out there for leopard geckos that is all white.

In addition to that, another good indicator for telling if your leopard gecko has mites is when they’re constantly laying in their water dish in an attempt to drown them.  The bites that the mites inflict can be painful so in hopes of getting rid of them, that is what your leopard gecko might do.

And because mites are hard to spot sometimes, them laying in their water dish will also give you the chance of seeing if any of them are left floating in the water once they come out of it.

Lastly, one more reason to tell if they have mites is by checking in spots where they might be hiding such as their ear canals or near their vent area.  Mites don’t want to be caught, so in an attempt not to, they’ll hide in spots that are difficult for your leopard gecko to reach.

How to Treat Them 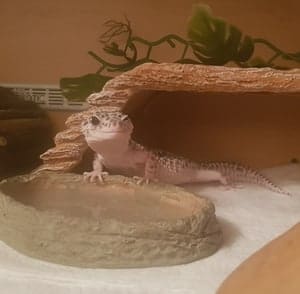 If you’ve quarantined your leopard gecko and you now know for a fact that your leopard gecko has mites then the next thing you will want to obviously do is treat them.  You’ll do this by using a couple of much-needed products for killing the mites, cleaning out their tank, and soaking them in lukewarm water to drown the mites.

Out of each of those steps though, the thing you’ll want to do first before anything else is placing them in a temporary container and then thoroughly cleaning out their enclosure until there aren’t any mites left in it.

There are many things to clean your enclosure with, but for a job like this, it’s best to use Dawn dish soap.  Dawn doesn’t kill the mites directly, but when covered with the soap, it suffocates them until they eventually die.

If you use Dawn mixed with a little lukewarm water while cleaning your tank then that’ll almost guarantee that you’ll be getting rid of any mites that may be hanging out inside and outside of the tank.

After you’ve cleaned out your tank and everything in it very, very thoroughly, you’ll now want to spray your leopard gecko with this stuff here from Amazon.  It’s a spray that’s made specifically for killing mites on reptiles and it will not hurt your leopard gecko in any way, shape, or form.

After you’ve sprayed your leopard gecko with that all over their bodies while avoiding their face, you’ll now want to let them soak in it while it works its magic and then spray the enclosure that you just cleaned out with this stuff here.

That will make sure you’re killing any mites left behind that may have survived during the whole treatment process and that will continue to kill them upon contact with the spray after you’ve placed your leopard gecko back into the enclosure.

Keep in mind that although both sprays are meant for killing mites, the first spray is for your leopard gecko specifically while the second spray is for the tank.  Just make sure that when you’re spraying your tank with the Provent-a-mite spray that you remove their water dish so that your leopard gecko doesn’t ingest it when placed back into the tank.

After you’ve got the supplies needed for getting rid of mites, just make sure to read the back of the bottles so that you don’t miss any further instructions that may be required while you’re in the process of doing so.  After you’ve done all of that, your leopard gecko should be mite-free and then you shouldn’t have anything else to worry about.

Mites can be tough to get rid of but if you follow the steps above then you should be able to exterminate them from your tank and your leopard gecko in no time.  If you’d just like to prevent mites or know how to tell if your leopard gecko has them then following the steps mentioned above should help you in doing so.

Mites are nothing to play around with when reptiles catch them but if the right cautionary steps are taken, you should be able to avoid spreading them to your leopard gecko altogether.