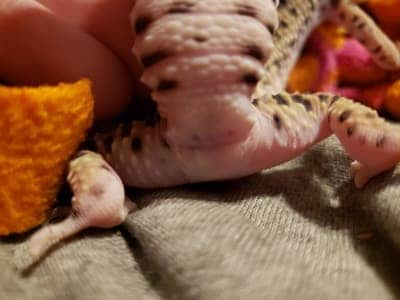 Although leopard geckos are generally very easy to take care of, being an owner to them can sometimes be very stressful.  Not because they’re too much to handle or difficult to maintain and keep up on, but because they do so many different things that we’re 90% of the time unfamiliar with, such as licking their vents, it causes us to worry.  Here are some other times they’ll lick it.

There are a handful of reasons why a leopard gecko could be licking their vent, but fortunately, many of the reasons are not anything to be overly concerned about.  While impaction is the only thing on the list that is a real threat to their health, even that can be treated with the right care and steps.  With that said, read on to get a little more insight as to why they do each one. 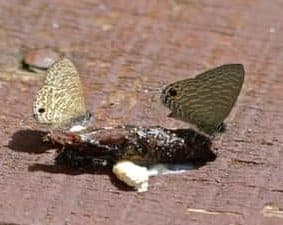 This is one of the more obvious reasons for why they lick their vents, but because leopard geckos are naturally such clean animals, they will sometimes lick their vents in order to clean up their mess.  Although that sounds nasty, it’s something that they do quite often and is expected behavior to see after they’ve just had a bowel movement.

Although there’s nothing to be concerned about, it’s still important that you’re always keeping your hands clean after touching or handling them so that you’re not spreading germs not only to yourself but to others within your home as well.

The reason why keeping your hands clean is so important is because they have been known to lick the hands of their owners upon being handled, so seeing as they lick their vents regularly after pooping, it’s pretty apparent as to why this would be extremely unsanitary.

Also, many owners don’t know this, but leopard geckos along with other commonly owned pets carry salmonella in their guts.  Because there are around 2,000 different strains of this particular disease according to this source, the strain that your leopard gecko carries is likely unique to them and because of that, they’re immune to it.

Unfortunately, this doesn’t mean that you’re immune to it as well.  Without the proper sanitary steps, you run the risk of catching the strain and although you may only be sick for a couple of days, it’s not something that you necessarily want to experience.  You’ll feel crummy, sluggish, and very ill.

So, with that in mind, make sure to always wear gloves, sanitize, and scrub your hands with soap after touching your leopard gecko.  It’s really easy to be forgetful to stay clean when handling our pets, but unfortunately, this same forgetfulness can potentially cause you or someone else to get sick.

Licking After Marking Their Territory

Because leopard geckos are very territorial pets, they’ll mark their territory within the tank by dropping a waxy substance from the pores near their vent to not only show that they’re the rulers of their enclosure but sometimes to let female geckos know that they’re ready to mate as well.

After doing each, they’ll sometimes lick their vents clean so that the secretions don’t harden in their pores.  While something like that happening is harmless, if they don’t clean it off by licking it, it will sometimes take assistance from the owners to remove this wax.

You’ll see a male leopard gecko do this when another gecko is present whether that be another male or female or even when by themselves.  Leopard geckos don’t mess around when it comes to claiming what’s theirs and they also like it to be known when they’re ready to mate.

So if you catch your leopard gecko dropping a waxy substance followed by a little vent licking, then they’re either marking their territory or trying to attract a female leopard gecko.

If you currently have two or more leopard geckos together in one tank and you don’t want them to mate or fight, I suggest getting a separate tank so that you don’t run the risk of either of these two things happening.

With that said, I recommend checking this tank out here from Amazon.  If two leopard geckos of the same or opposite sex are paired together in an enclosed area for too long then eventually one of the geckos could end up gravid (pregnant) or potentially losing their life due to aggression from fighting over territory. 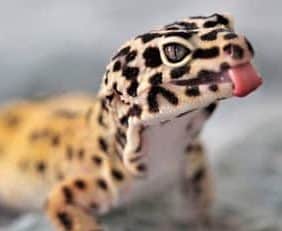 Seeing as leopard geckos are very clean animals by nature, this reason for why they lick their vents isn’t surprising.  Have you ever wondered why most leopard geckos poop in one designated spot within their tanks?  This is why.

Other animals such as cats and dogs are also good at keeping themselves clean, but because they carry fur, it’s much easier for dirt to be trapped underneath all of it along with the risk of it becoming matted up as well.

Because leopard geckos only have skin, cleaning off their vents and other body parts is much easier for them and there’s no risk of dirt being trapped underneath any fur.  That’s not to say that cats are dirty animals because most of them are great at keeping clean, but for leopard geckos, the effort to do so is much less.

If your leopard gecko hasn’t pooped recently or marked their territory to your knowledge, then more than likely they’re just licking their vents to keep clean.

When some owners think of impaction, the first thing that they might think about is a mass of food or a foreign object trapped somewhere within their lizard’s digestive system unable to pass, but what they might not know is that impaction can affect the vent as well.

The reason for this is that the vent is where their waste comes out of, so if that gets plugged up from something that’s hard to pass, then swelling could occur and as a result, your leopard gecko might start licking due to irritation and hopes that they can clear out the area.

If this happens, then soaking your leopard gecko in some lukewarm water low enough for them to stand in but high enough to reach their vent might offer them some relief by softening up the stool, but if that doesn’t work then the best thing you can do next is go to the nearest herp vet.

Usually, I would recommend belly rubs to help the impacted substances move through the digestive system so they could poop it out, but since it’s stuck in the vent and the area is likely already irritated as a result, I strongly advise against rubbing this area and seeking professional help instead if the soaking doesn’t work.

Licking After a Shed 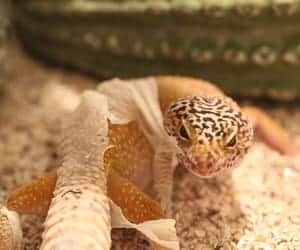 There may not be any apparent reason for why they do this, but after a shed, it’s not too surprising to see your gecko licking all over their body whether that be their nose, feet, tail, or even vent.  Because they’re leopard geckos, there probably isn’t a logical explanation as to why they do this, but if I had to guess, then it would likely be because they’re making sure they’ve gotten all of their shed off.

While there are a few reasons why they do this, I’d have to say the most common one is because they just like to stay clean.  Again, leopard geckos are very clean animals by nature.  So if you catch them licking back there throughout the day, then more than likely they’re just giving themselves a little bath.

Because you can never be too safe though, it doesn’t hurt to take a look at their vents to make sure nothing more serious is going on.  While impaction is common and a lot of the times treatable with the proper steps, it can turn into something a lot more serious if it goes unnoticed and can even claim the life of your gecko.