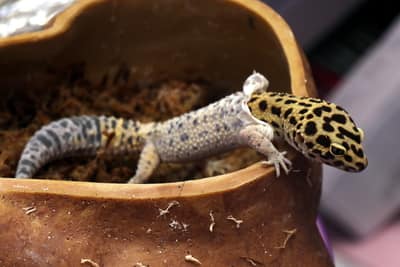 Like most other reptiles, leopard geckos shed their skin. How much they actually do it, the frequency, will depend on one very specific factor, their age. Nonetheless, shedding happens to all of them. Sometimes it may seem like they’re not shedding at all because they do it so fast. Rest assured, if they’re growing they’re definitely shedding. But to answer the question “how much do leopard geckos shed?” a little more in-depth, I suggest reading on.

How often do leopard geckos shed?

Younger leopard geckos typically shed twice a month until they reach the age of 1. Once they reach adulthood their shedding frequency will be closer to once every 4-8 weeks.

Just to reiterate, the main factor that plays a role in how often they shed is age. When they’re younger, their bones are constantly growing and because their skin can’t keep up with the growth. So a new layer of it has to be exposed.

With leopard geckos over a year in age though, their bones aren’t growing anymore. For this reason they’re not shedding nearly as much as when they were younger. Read on to learn more.

These are just estimates, but should give you a ballpark idea of what to expect. Keep in mind, there are many factors that can influence a leopard gecko’s shedding cycle.

Should you help your leopard gecko shed?

Leopard geckos can easily shed their own skin without assistance from their owner in most cases. The only time you will need to help them is during a stuck shed. This may cause them to be unable to remove it. Leaving the stuck shed on them is a safety hazard, and can result in pretty serious consequences.

So make sure to keep that in mind when dealing with reptiles like leopard geckos.

1. How to ensure a smooth shed 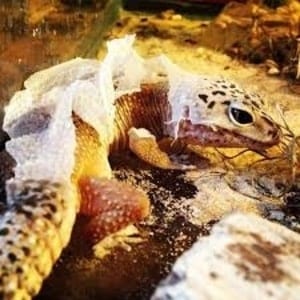 As stated above, complications can arise if they happen to have a bad shed, but to ensure that that doesn’t happen, you’ll want to make sure you not only do, but have a few things as well.  The first thing is to make sure you have a nice and moist hide.

The whole purpose of their moist hide is to exclusively ensure that they’re having an easy shed every single time. Without it, there could very well be issues.  There are various different ways to make a hide moist, but if you’d like to know how I make mine moist, then it’s from using this stuff here over on Amazon.

Other alternatives that have been known to hold tons of moisture are paper towels and moss.  The only problem is that while paper towels are fairly safe to use, moss isn’t.  Some people have had success using it, but others have had issues with their leopard gecko becoming impacted shortly after ingesting it.

So if you’ve ever considered moss, please rethink your decision.  While every leopard gecko won’t consume it, there are some that will.  And because it’s pretty much impossible to tell whether your leopard gecko will or not, it’s best to just not use it altogether.

Keep in mind that leopard geckos generally won’t eat indigestible items within the tank unless they feel as if they are lacking a certain nutrient.  So if you’re keeping them properly supplemented, then you shouldn’t have a problem using moss. But for me personally, I just feel like it’s too risky. Whatever you decide to do though is completely up to you.

2. Indicators of an upcoming shed

Leopard geckos shed so quickly that you might not ever see them do it for months on end.  But before they’re about to enter one, they’ll usually display a few symptoms that may seem a little out of the ordinary.

Here are some of the symptoms I’m talking about.

Although you may not be able to watch the shed happen, those signs and symptoms are telltale indicators that’ll let you know that a shed is coming within the next few days.  Not only that, but they’ll also begin to turn very pale or white in color.  While some of the other signs can be hard to spot, their change in color isn’t.

Also, while some of the listed signs may be a little worrisome, they’re completely normal.  This is something that almost every leopard goes through and unfortunately, there’s nothing that we can do about it except let it pass.  But thankfully, it passes as soon as they’ve shed off their skin.

While their odd behavior may be present for the days leading up to the actual shed, the process in which they get the skin off will happen within 24 hours and it’ll usually take place in an area where you can’t see it happen such as in their hide.

They’ll clean the shed up themselves by consuming it and not only because it looks tasty to them but because it provides them with nutrition and also because they’re lizards that like to keep their area clean.

3. How to deal with a stuck shed 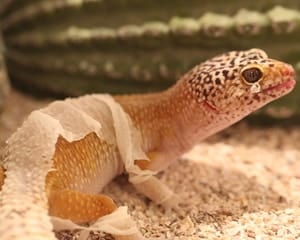 As stated above, leopard geckos of all ages are usually pretty good at making sure that they get all of their shed off with no assistance as long as a properly moist hide is available to them.  But because sometimes we as owners make the mistake of not making our tanks moist enough, they’ll sometimes get stuck shed and as a result experience a few complications.

When their shed is stuck, they’ll do anything that can to get it off.  They’ll bite at it, try to chew at it, and even rub the affected area against objects in the tank in attempts to rub it off.  They don’t only do this because they want to get the dead skin off, but because it’s very irritating and uncomfortable to have on their bodies as well.

Stuck shed can cause great amounts of pain to the parts of the body that it’s stuck on and it can even get so serious to the point where it will cut off their blood flow to the affected body part and cause them to discolor and potentially even fall off if not treated.  Actually, it’s so serious that I wrote a full in-depth article on it here.

That article not only explains some of the symptoms that you can expect to see, but it also goes a little more in detail about how you can prevent it as well.  If you want to learn how to do that, which I’m sure most of you do, I suggest taking a look at that article.

How often do leopard geckos shed? It’s a bit hard to answer definitively because of the age thing. But also, because different lizards may just shed at slightly different times. Having said that, your leopard gecko is probably going to shed every 2 to 8 weeks, regardless of age. Younger geckos shed more often, older geckos less often.

One thing you can be sure of is that young leopard geckos will always shed a lot more than adults. They are still growing until they reach adulthood in their very first year of being alive.

Although they shed quick, they still show signs that it’s about to happen that will give you confirmation that it’s about to begin.  To know how often your own leopard gecko does it, it’s good to keep a log on-hand so that you can track just how much they actually do it.

Unfortunately, accidents do happen and many owners have and will continue to experience stuck shed with their leopard geckos as long as these animals are kept as pets.  But if you have the proper knowledge and everything set up in the tank correctly, you shouldn’t have any issues with yours.

Keep the humidity in their tank up and their hide real moist when you suspect a shed coming on and you’ll never have to deal with the complications of stuck shed for as long as you own them.