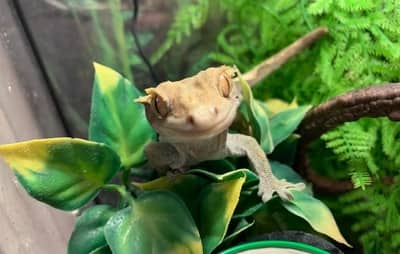 Bum licking may sound like a strange and alarming behavior. It’s fine for dogs, but the first time you see your crested gecko thus occupied, you may well wonder what is going on. Perhaps you have seen him licking his eyeballs frequently, and that’s understandable due to his lack of eyelids – but the other end of the spectrum is another matter entirely.

So why is my crested gecko licking his bum? The main reason for bum licking is general hygiene and cleanliness. This can occur at specific times such as after excretion, after shedding, after marking territory and after mating.

This article will discuss each of these scenarios, helping you to recognize possible reasons for your crested gecko’s licking habits.

By now you may have noticed that your crested gecko is actually quite a clean little fellow. He doesn’t have shaggy fur or feathers to gather dirt, and he likes to keep his soft, leathery coat in good condition. This includes cleaning the vent area, and the best option at his disposal is to use his lengthy tongue.

It also helps if his habitat is maintained regularly, with a thorough clean at least once a week. Scrub and disinfect the terrarium with a bleach solution before rinsing with clean water. The type of substrate you use will also impact your crestie’s cleanliness. You could use something which is easily disposable like paper towels, or an organic peat which helps the waste to decompose naturally.

Either way, crested geckos will do their part to keep themselves and their habitat as clean as possible by regularly licking their bums. 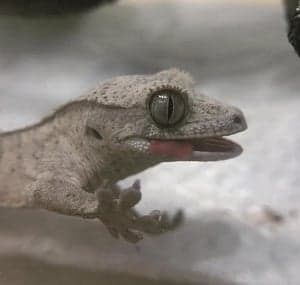 Probably the most frequent reason for cleaning his vent would be after the crested gecko has had a bowel movement. This is normal, but do keep a look out for anything unusual where the feces are concerned.

Crested geckos are known to suffer from diarrhea at times, and this is often as a result of their diet. If your gecko is eating mostly soft pureed foods, he may be prone to have very loose stools. It is best to offer a healthy balance of crickets or roaches, meal replacement powder, fresh fruit and the occasional fatty insects such as waxworms.

It is also a good idea to have your gecko’s stool tested for parasites, just to be on the safe side.

As longs as there are no parasites, diarrhea or other complicating factors, your crested gecko will be able to manage his ablutions with ease and keep his vent area nice and clean.

A large part of a crested gecko’s life includes the process of shedding its skin as it grows. If you have had your crestie from babyhood, you may have noticed how frequently it needs to shed. Hatchlings and babies shed about once a week. As they grow and reach adulthood, they will shed less often, perhaps once or twice a month, or even less.

If you did not notice the shedding, this may be because your crested gecko ate up all the old skin before you even realized he had shed. This ingrained instinct of eating the old skin is possibly a carryover from the days in the wild when it was important not to leave any clues behind for predators.

It could also be an extra source of nutrition. Whatever the reason, crested geckos eat their old skin immediately after shedding, and this often occurs at night.

Some geckos like a bit of privacy while they are consuming their skins, and that’s where you might want to provide a shed box with some sphagnum moss inside to help the process along. When the gecko is about to shed you will see that his skin becomes fairly dull and discolored, and you might see him start tearing it off and eating it.

During the course of shedding and consuming his skin, inevitably your crested gecko will lick and clean his bum area. Be sure to check that there is no retained skin around the vent or the tail, toes, and eyes.

If the skin is not shed properly, the blood supply to these areas can be hampered, causing problems such as necrosis or even organ death. If you notice any little bits left behind, you could gently remove them with a damp cotton bud. Alternatively, place your gecko in a shallow dish of lukewarm water for a short while.

Humidity and hydration are both important for your crested gecko’s well being, especially where shedding is concerned. This can be maintained with daily misting of the terrarium, and by placing a shallow dish of water inside the enclosure.

All things considered, your crestie should have no problem licking his bum after shedding as he looks forward to growing into his brand new skin. 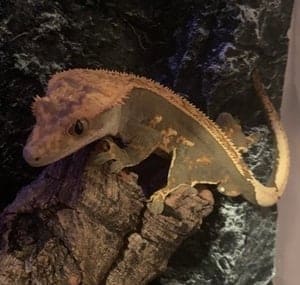 Adult male crested geckos can become increasingly territorial, especially as the mating season approaches in the warmer summer months. Some geckos tend to bite your hand during this season of passion, but it is usually not serious.

This is when you may hear some squeaking noises which are in fact the mating calls. The female may even make barking sounds when she wants the male to give her a break. Crested geckos may also lick surfaces to try and find out any evidence of potential mates nearby.

Marking territory has the dual purpose of staking claim to an area, and also letting mates know that they are available. For this reason it is not recommended to keep two males in close proximity during breeding season as some territorial battles may ensue. However, one male may be happily housed with one or more females.

Crested geckos produce pheromones in their femoral pores at the base of the tail. These pheromones send out signals that help mates to find each other, as they mark and permeate the atmosphere with their particular crested gecko scent. After your crestie has had a bout of marking his territory he will likely lick his bum to clear any traces of secretion and to keep his vent area clean.

As crested geckos are mainly nocturnal, mating generally occurs during the night hours. The male will bite into the neck skin of the female to ensure that she does not escape or move during their encounter.

This can leave the female with bite marks, but these usually disappear the next time she sheds her skin. After mating, the male’s hemipenis will be protruding. This is where he needs to do some licking until it goes back into its pouch, usually within a few hours.

The male anatomy of the crested gecko is a bit different than other animals such as mammals. Whereas mammal males have one penis, geckos have two hemipenes, or in other words two ‘half penises’. This is almost like a backup system, as only one hemipene is needed and used during mating.

Licking the erect hemipene after mating serves two purposes; firstly to clean the area in case there is any residue or foreign particles, and secondly to lubricate the organ so that it can slide easily back into the hemipene pouch.

Sometimes the hemipene does not retract after mating, even after a considerable period of time. This is called hemipene prolapse which can be a dangerous condition for your crested gecko.  Prolapses often occur as a result of injury during mating.

This can happen if the male is young and inexperienced, or if the female is resistant, or if there is a marked size difference between the male and female. Injury causes swelling and inflammation which makes it very difficult or impossible for the hemipene to be retracted into the narrow pouch opening.

If you notice a prolapse of this nature, with a blueish-red swollen hemipene protruding from your male crested gecko, it is important to get help speedily and consult your veterinarian or reptile professional.

Thankfully, in most cases, your crestie’s dedicated licking of his hemipene is all that’s needed to complete a successful mating episode and return his organ to its proper place for future happy use.

Next time you see your crested gecko licking his bum, do a quick mental check through the above scenarios and you may likely find that he is simply fulfilling one of his hygiene routines. However if the licking is excessive or accompanied by unusual and worrying factors such as swelling or inflammation, please don’t delay in contacting your veterinary professional.

But if your crested gecko has just defecated, or is busy shedding, or perhaps just marked his territory or mated, then all of these are perfectly normal reasons for him to be licking his bum. So you can sit back and enjoy observing the fastidious cleaning habits of your appealing pet.