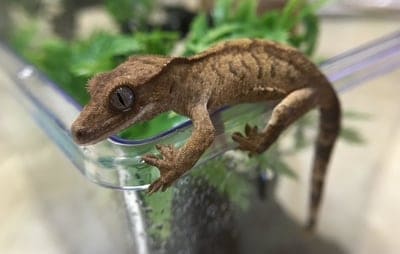 Crested geckos are known for being calm and easy to care for pets. However, as is seen with so many of our animal friends, pets sometimes display strange behaviors. When we witness our pets acting funny, it can cause us to worry that something may be wrong. Most of the time, though, it turns out to be something we just didn’t understand or can easily fix. This is often the case when a crested gecko is going crazy.

So, why is my crested gecko going crazy? The most likely reasons for their crazy behavior is because of environmental changes, stress due to handling, the feeling of being overly exposed, the presence of another gecko, or hyperactivity in mating season.

For this post, we want to look more closely at the strange behaviors you’ll notice with your crested gecko and break down the reasons behind them. We’re going to talk about how you can interpret what your crested gecko is trying to communicate. We’ll also briefly look at several indicators that something is wrong with your gecko before we wrap things up.

Freaking Out Outside the Tank

One of the reasons we keep lizards is so we can observe them and interact with them. Thus, we tend to like to get them out of their habitats and put them in ours. Sometimes, when you put your crested gecko on the floor or a piece of furniture, you’ll observe him start to go a little nuts, bouncing from one spot to the next, moving about the room in a chaotic sort of manner.

Here’s the thing. Crested geckos are curious by nature. However, it’s not necessarily normal for them to go crazy and almost literally bounce off the walls. When they’re just exploring, they’ll loaf around at a slower, steady pace, not spring across the room over and over like a frog.

If you’re seeing your gecko freak out when you allow him to walk around the house, he may be experiencing stress brought on by the change of environment. Crested geckos can often feel stressed when they are unfamiliar with their surroundings.

The best thing to do is to approach the lizard calmly and slowly, slip your hand under his belly, and place him back into his habitat so he can calm down.

Freaking Out in Your Hands

Crested geckos are dynamic little pets. They have personalities and moods which cause them to behave in different ways. When you’re handling them, they can go from calm and cute to, all of sudden, extremely wiggly and completely spazzing out, as if they must get away from you.

Obviously, if your crested gecko isn’t used to being handled, you’ll want to start slowly with short handling sessions a few times a week and work your way up to more frequent and longer periods. But, what if you’ve had your gecko for a while and he just starts freaking out when you hold him, wriggling about and even biting you sometimes?

You’ll need to assess the situation by considering any changes you may have made within the lizard’s environment. Have you placed new items into the tank? Did you make a change to their diet?

What about other geckos you may have—is there something going on with one of them that’s agitating this guy? Sometimes you won’t be able to pinpoint what’s bothering your crestie. As long as this behavior passes, you shouldn’t worry about it.

One thing you need to be careful of is not to squeeze your crested gecko when they start to freak out like that. The pressure will only increase their stress and lead to more crazy behavior. You could also injure them.

The same is true for if they should bite you. Don’t squeeze them and don’t put them back in their habitat immediately after a bite. You don’t want to teach them that freaking out gives them control over you and gets them back into their tank.

Freaking Out in Their Tank 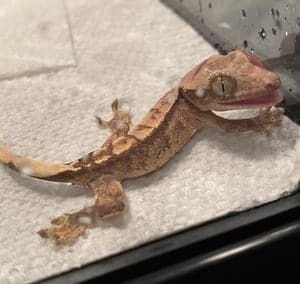 Many lizards will want to be hidden during the day. If you don’t give them enough places to burrow under and hide, they may want to get out of their tank so they can find a space that’s more accommodating to their needs. Thus, they’ll get restless.

Restlessness in a crested gecko during the day in his tank isn’t normal behavior. Ever see your crestie going crazy and looking like he’s trying to escape his habitat? This usually means something is driving the gecko a little nuts either inside his tank or nearby.

If your crested gecko feels too exposed, he won’t be able to rest, so you’ll see him start to freak out. You might see him launching himself all over the place, climbing the walls of the tank, and being very spastic.

It means there’s a good chance you need to add more hideaways, plants, and other objects to the tank. Your crestie likely feels that there’s nowhere to hide. While you want to see them, they don’t want to be seen during the day.

One thing crested geckos are very good at is jumping. When you set up their habitat, you’ll want to put some branches, rocks, and other things they can climb on and jump between in the enclosure.

Beware though, they have been known to wait for you to open the tank for feeding time so they can jump out. Should they succeed in jumping out, you might be battling with your little escape artist frequently after that.

Their desire to break free usually stems from wanting to find a mate or the situation we just mentioned above. However, once they’ve proven to themselves they can get out, they’ll be even more driven to do it again.

Why Is My Crested Gecko Being So Aggressive?

Once in a while, you might notice your crested gecko behaving aggressively. It’s rare to see this in these lizards so if you do notice it, there’s almost certainly something you need to change.

Both males and females can display aggressive behavior. It’s more common in males, however. When a female is acting aggressively, the most likely reason is a persistent, pursuant male won’t leave her alone.

While she may have the desire to breed during mating season, it doesn’t mean she won’t need a break if she’s being consistently pursued. You’ll simply want to remove her from the situation to give her some separation.

Males will show aggression towards each other or towards you when there is another male present or even close by. You’ll never want to put two adult male crested geckos in the same habitat. They will stress each other out and you’ll likely have a crazy fight on your hands.

Some experts even recommend not keeping two males in the same house. If you are going to have more than one male, put them in separate habitats that aren’t anywhere close to each other. The best thing you can do, though, is have one male and a number of females if you’re going to have multiple cresties. 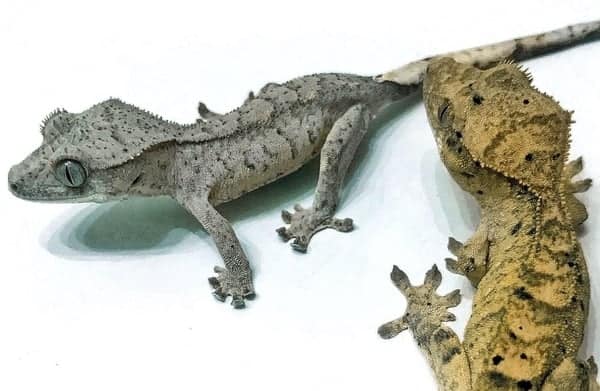 Is My Male Attacking My Female?

The answer to this is most certainly no. The mating season for crested geckos runs from March through October. During that time, a mature male will pursue one or more females for breeding. While some males are more persistent than others, most of the copulation encounters look very aggressive. It will look a lot like the male is attacking the female.

Here are the different behaviors you’ll likely see from him:

This whole process looks pretty strange and a bit crazy. The male will behave in a manner where he appears to be agitated when he’s being driven by his natural instinct to mate. However, when he mounts and bites the female, he isn’t trying to hurt her. It isn’t an attack.

The best thing you can do for any pet you take into your home is to educate yourself on what their needs are. Some animals have some unexpected ways of expressing themselves so if you don’t understand what they’re trying to tell you, you could inadvertently cause them harm or simply make their existence uncomfortable and unhappy. As pet owners, that’s not what we want for our animals.

Your crested gecko may go crazy sometimes, but there may be something you can do about it. Learn their behaviors and respond to them accordingly. You have to know what is and isn’t ordinary for them before you can decide on how to proceed.

For the most part, you’ll find your crested gecko is just doing what crested geckos do and communicating with you in the only “crazy” ways they know how.