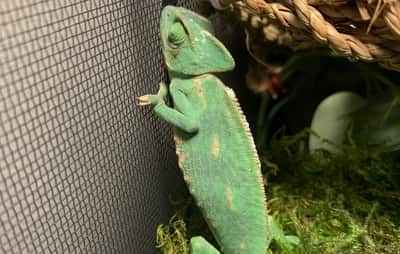 Lizards are extremely fascinating creatures with interesting and unique abilities. Chameleons are known for their captivating ability to change color along with their mood, but you may be wondering what else they’re capable of.

So can chameleons walk on walls? Chameleons are not able to climb smooth walls, but they may express discontent with their cage by climbing on the screen of their enclosure.

Below, learn more about chameleon anatomy and why they’re unable to climb smooth walls, as well as how they move, walk, and defend themselves. You’ll also be able to learn about the reasons why your chameleon may be climbing all over the screens around its enclosure.

Why Can’t Chameleons Walk on Walls?

While chameleons can easily scale trees and other plants and climb all over the screened walls of their enclosure, chameleons aren’t able to climb on smooth walls like geckos and anoles can.

This is because geckos and anoles have specialized toes covered with millions of tiny hairs. These tiny hairs actually create a molecular bond with the wall, allowing them to “stick” and climb easily!

Chameleons, on the other hand, have feet that are specialized for climbing branches. Their two-toed feet are actually very similar to bat wings or duck feet; they’re made up of bound bundles of fingers and toes.

This enables them to grip branches successfully. Chameleons also have ball and socket joints that allow them to rotate their wrists and ankles and climb in a very agile manner. Along with their strong claws, chameleons’ feet are truly designed to be perfect for tree climbing. 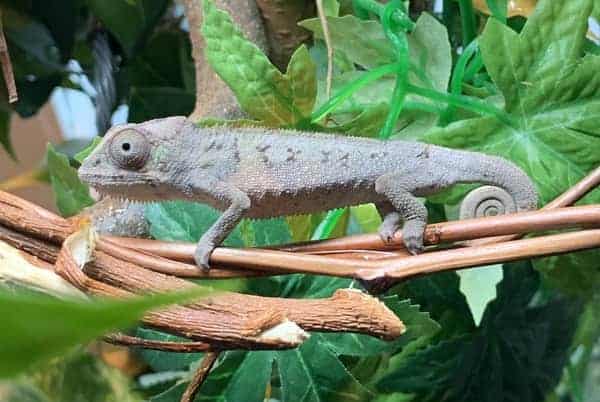 How Do Chameleons Walk?

Chameleons move very slowly. Unlike most other lizards, they don’t have to run to catch their prey because of their long, sticky tongues. Because of this, their running skills aren’t well-developed, and they don’t pick up much speed while walking either.

In the wild, it’s high priority to blend in with the environment and evade predators. One way chameleons do this is by walking with one limb at a time as they travel from tree branch to tree branch. This way of moving resembles the way leaves blow in the breeze, so it’s a method of blending into their habitat.

Since most chameleons are arboreal, meaning that they live in the trees and rarely come down to the ground, this swaying type of walk is very helpful for their lifestyle in the forest.

In captivity, chameleons retain this sometimes silly-looking walk. It can be very fun to watch your chameleon explore his enclosure! Plus, understanding that chameleons live in trees in the wild gives you a better idea of what their enclosure should look like–it’s important to add plenty of plants and branches!

If My Chameleon Can’t Climb Walls to Run Away From Predators, How Can It Defend Itself?

Why Is My Chameleon Climbing on the Screen of His Enclosure?

It’s never a good sign if your chameleon is climbing all over the walls of its enclosure. In fact, this is a sign that there’s something wrong in its environment, and it’s your job as its owner to figure out what it is and correct it. Below, read about the different reasons why your chameleon may be scaling the walls of its cage.

This is the most common reason for chameleons to climb the walls of their cage. Chameleons have a strong need for security, which can be provided by plenty of plants and branches in their enclosure. Dense leafy areas create places to hide away and feel safe, rather than feeling uneasy and stressed out in the open. Make sure to provide plenty of cover for your chameleon, and they should calm down.

If you’re housing more than one chameleon in the same enclosure, that can definitely cause your pet to climb the walls and attempt to get away from the other chameleon. These lizards are solitary and antisocial. Unlike us, they don’t crave companionship. In fact, they’d be perfectly happy if they never ran into another animal.

Your chameleon may also try to escape if there are other pets in the house who are allowed to get close to its enclosure. Even if they have no way of getting in, it can be very stressful for your chameleon to have to deal with another animal sitting outside of their cage observing them or even attempting to interact with them.

The best way to keep your chameleon from trying to escape is to choose a good location for its enclosure. It will make your pet feel secure if they can look down at any other animals, but they’ll feel the most secure if there are no animals in sight whatsoever.

Searching for a Mate

Sadly, some chameleons will never be satisfied with their enclosures, regardless of size and location. This is especially true for male chameleons who always seem to be on the lookout for a female mate. In this case, it’s important to do whatever you can to create a satisfactory environment.

But if your chameleon is still searching for a mate, you could consider mating it and seeing if the behavior stops. If mating isn’t an option, make sure to avoid using an enclosure with a fine screen. If your chameleon continuously climbs and rubs against it, it can cause injury. 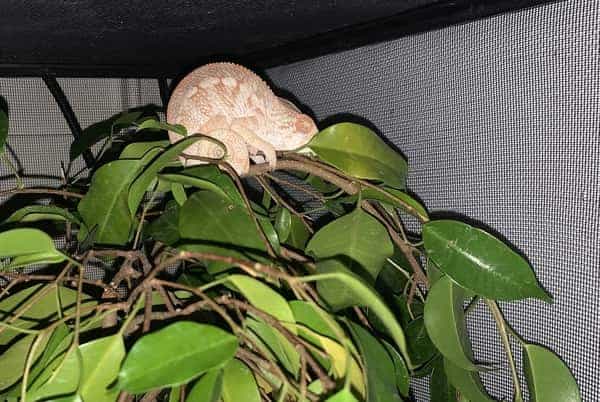 Getting Ready to Lay Eggs

Female chameleons can get very restless before laying eggs, and they may feel a need to explore by climbing the screen walls of their enclosure. This means that they’re searching their environment for the optimal place to lay eggs. In this case, it’s not an issue if your chameleon is climbing the walls unless they do it for several days without laying eggs.

If this happens, it means that your chameleon was unable to find what she considered to be a suitable spot for her eggs. The solution here is to provide more options as far as places to lay eggs.

Chameleons are cold-blooded and use their environment to maintain their body temperature. Climbing the walls, especially hanging from the top of the enclosure near the light or heat source, can indicate that your pet is feeling too cold.

Double-check your temperatures; they should range from 70 to 80 degrees Fahrenheit on the cool end and 80 to 85 degrees on the warmer end.

A solution to provide your chameleon with the heat it’s craving is to use a large reflector to spread heat over a wide area. You’ll also want to mount the light as high up as possible to keep your chameleon from coming too close and getting burned.

Although chameleons aren’t able to walk on smooth walls like geckos and anoles do, they’re more than capable of climbing the screened walls of their enclosure. Usually this behavior indicates that the chameleon is unhappy with its environment, and there are several possible causes for this.

These include temperature regulation, preparing to lay eggs, searching for a mate, trying to escape, and looking for cover.

Chameleons walk slowly, limb by limb, and their gait is reminiscent of leaves blowing in the wind. This is a behavior that was developed in the wild as a way to blend in with the environment and avoid predators. Chameleons have plenty of other defense mechanisms as well, such as freezing, freezing and rolling, and vibrating.