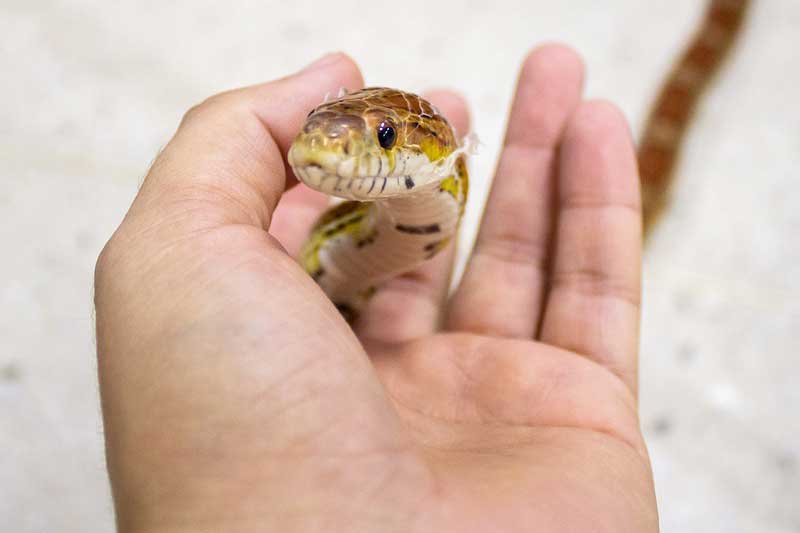 You can find Corn snakes (Pantherophis guttatus) abundantly in the central, eastern, and southeastern states of the United States, from southern New Jersey to Florida and as far west as Utah. They live in different habitats, including forests and inside barns or attics. Their calm temperament and low maintenance make them the second most popular pet snakes – with the first being the ball python. Why are they so popular? To answer this question and more, like how they got their name and what behaviors they have, this article will cover 23 interesting facts about corn snakes.

Check out these 23 facts about corn snakes that I thought you would find interesting.

1. They are a Species of Special Concern in Florida

Since corn snakes are native to North America and widely spread throughout numerous states, they are generally not considered endangered species. However, due to human expansion, some of their habitats are being impacted. The state of Florida lists corn snakes as a Species of Special Concern in the Lower Keys area.

2. The Longest Corn Snake is 6 Feet

Corn snakes are slender snakes. When fully grown, they average between 1.5 feet and 4 feet long. However, the largest recorded corn snake was 6 feet.

3. They Have Two Name Origins

Corn snakes get their name from the fact they often live near grain or cornfields where they find their favorite food: rodents. However, there is another speculation about their name origins. You may commonly hear people say it’s because of the checkerboard pattern of scales on their underbelly that looks like kernels of corn.

4. They Are a Species of Rat Snakes

Corn snakes are a type of New World rat snake, genus Pantherophis. The New World categorization simply indicates they are found in the Western Hemisphere, especially throughout North America. In contrast, Old World rat snakes are in the eastern hemisphere.

Despite their patterns and coloring, corn snakes are non-venomous snakes. They are also very reluctant to bite humans, making them quite harmless and more useful for pest control.

6. They Are Constrictor Snakes

Since they are non-venomous, corn snakes constrict their prey. This means they will bite their prey, wrap themselves around their prey’s body, and squeeze until subdued. Corn snakes will then swallow their prey whole, typically headfirst. Their diet mostly consists of rodents, small lizards, frogs, bird eggs, and small birds. Sometimes they even swallow their prey live!

7. They Don’t Have to Eat Often

Corn snakes can go days, even up to a week, without eating. In the wild, they usually hunt every few days. As pets, your corn snakes don’t need to be fed every day. You can feed hatchlings every 5 to 7 days and juvenile corn snakes every 7 to 10 days.

8. Their Color Depends on Their Habitat

Corn snakes are typically dark yellow, light brown, grey, or orange, with various patterns on their back. Mostly it is red or reddish-brown spots or stripes. Their underbellies have a black and white checkered pattern. Overall, the corn snake’s coloring will depend on their habitat to camouflage into their surroundings. 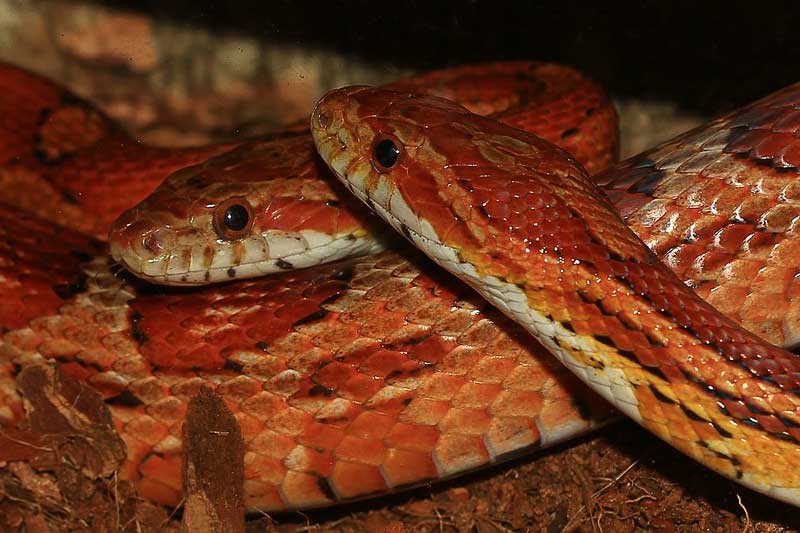 9. They Are Popular Pets

As previously mentioned, corn snakes are popular pets, especially in the U.S, due to their temperament, size, and unique morphs. These snakes are easy to care for, nonvenous, docile, and reluctant to bite. Farmers also often keep them to control rodent populations around their cornfields.

10. They Live Longer in Captivity

While corn snakes in the wild live an average of 6 to 8 years, they can live over 20 years in captivity with proper care. The oldest recorded corn snake was 32 years and 3 months.

The difference in lifespan is mainly because of consistently available food and the lack of predators in captivity. In the wild, corn snake predators include bobcats, foxes, weasels, hawks, skunks, and opossums.

Their popularity as pets has led to a lot of breeding activity to generate over 800 morphs of corn snakes with various characteristics. The amount of different morphs is also due to their ability to interbreed successfully, especially with other snake species.

Examples of morphs include:

12. Humans Easily Mistake Them for Copperheads

The venomous copperhead and corn snakes have very similar colors and patterns. One main difference is copperheads have a dark hourglass shape on their back. However, from afar or in the heat of the moment, we often mistake these two snakes.

Due to this mistaken identity, humans commonly kill corn snakes even though corn snakes are non-venomous and generally harmless to us.

13. They Abandon Their Eggs

Corn snakes don’t show any parental care. They breed during spring from March to May, and females lay eggs around a month after mating.

She will deposit around 10 to 30 eggs, usually in areas such as piles of decaying vegetation or a rotting stump. Once she deposits her eggs, she will abandon them and have no more association with them. It’s not surprising that only a few of the newly hatched corn snakes survive to adulthood due to various predators.

14. They Have a Specialized Scale

Baby corn snakes use their specialized scale, known as an egg tooth, to hatch out of their eggs. This scale helps them slice the eggs open so they can emerge.

As mentioned in the fact above, corn snakes are independent of their parents from birth. They hatch as well-developed snakes and become mature between 18 to 36 months of age.

15. They Can Climb Trees

Corn snakes can climb trees and usually do so when they are hunting. Sometimes they climb up trees to search for bird eggs in nests or climb a tree near an abandoned building to enter the building and hunt mice or rats. You can even find corn snakes taking a nap on trees. However, young corn snakes typically stay on the ground until they turn four months.

16. They Can Also Be Secretive

Although they can climb trees, corn snakes can also be very secretive. They often spend time underground in rodent burrows. You can also find them hiding under rocks, logs, loose bark, or other debris.

17. Their Sense of Smell is Amazing

Corn snakes rely on their great sense of smell to hunt. Due to their poor eyesight, they use their sense of smell to navigate their surroundings. In general, snakes will flicker their tongues back and forth to pick up tastes and smells from the air.

18. They Shed Their Eyelids

Corn snakes don’t have eyelids. Instead, they have a skin layer covering their eyes for protection and moisturization. Just like how they shed their body skin, corn snakes can also shed this layer over their eyes. Over time this layer becomes dry and slightly dirty, thus decreasing their ability to see clearly.

19. They Are Both Nocturnal and Diurnal

They are less active during the colder months, hunt less, and will brumate during the winter. Brumation is similar to hibernation, except it is what reptiles do. 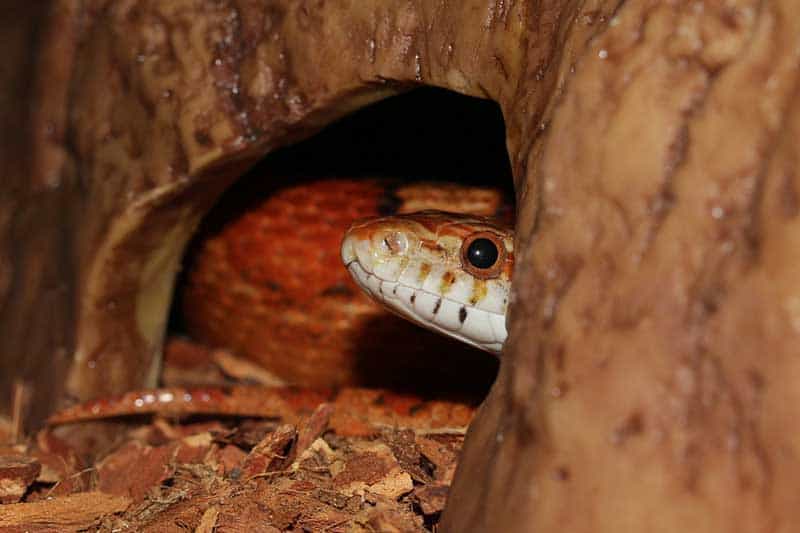 20. They Have a Long Striking Range

Corn snakes may not be venomous, however, they can bite. If they are very hungry and you have been handling their food, they could mistake your smell for prey and bite. Additionally, their striking range is a remarkable one-third to a half of their body length.

21. Corn Snakes Are Spreading to Australia and the Caribbean

Although corn snakes are native to North America, there are recorded wild species found in Australia and several Caribbean islands, such as the Bahamas, St. Thomas, and Grand Cayman. In Australia, wildlife organizations caught around 80 corn snakes throughout the Sydney region between 2002 and 2014.

Corn snakes help control the population of the small animals they prey on as food. Since they also enjoy eating mice and rats, they help humans control these populations as well. This prevents crop damage and the spread of diseases.