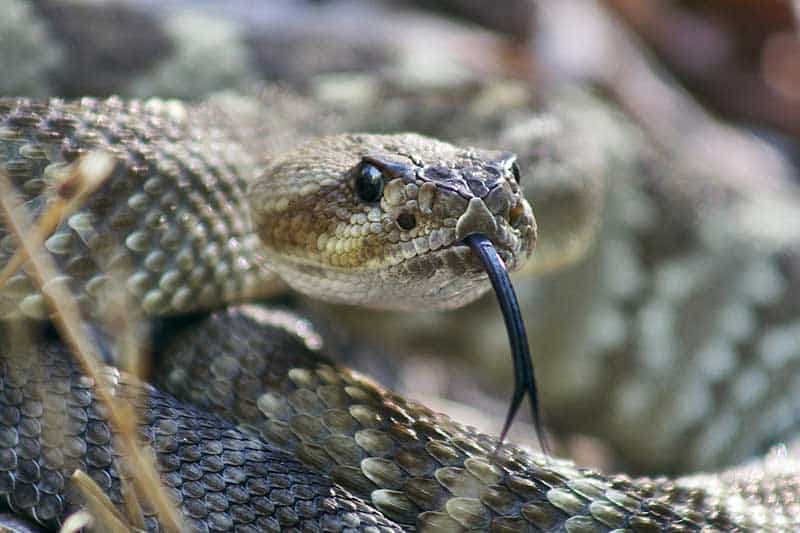 Rattlesnakes, genus Crotalus, are one of the most common types of venomous snakes in North America though they can be found as far south as Argentina. They are in the pit viper family and deliver their venom using 2 large fangs. In this article we’re going to learn some interesting facts about rattlesnakes like how many there are, which one is the biggest, and generally what makes them unique from other snakes.

Here are 22 random facts about rattlesnakes I dug up that I thought you might find interesting!

Rattlesnakes are actually in a subfamily of Viperidae, pit viper. There are 2 other subfamilies under viper, pitless vipers and Fea’s vipers. Rattlesnakes have more species and subspecies than another other genus in the pit viper subfamily. All pit vipers are venomous and recognized by a heat-sensing pit organ that’s between the eye and the nostril on either side of the head.

2. Their rattles are made from the same stuff as our fingernails

A rattlesnake’s rattle is made up of several individual segments of keratin that are spaced apart enough to create the rattling sound when they shake their tail in a certain way. Keratin is the same substance that our fingernails are made of.

3. Rattlesnakes do not lay eggs

4. Arizona has the most species of rattlesnakes

Positioned between Southern California, Mexico, and New Mexico, Arizona’s climate and animal habitats are perfect for rattlesnakes. There are 14 species of rattlesnakes found the state of Arizona, several of which are endemic to the state.

5. A rattlesnake’s fangs are hollow

Rattlesnakes have what are known as solenoglyphous fangs. All vipers have these types of fangs, but rattlesnakes are among only a few whose fangs are actually hollow. This makes them like 2 tiny syringes injecting poison into their prey’s bloodstream. 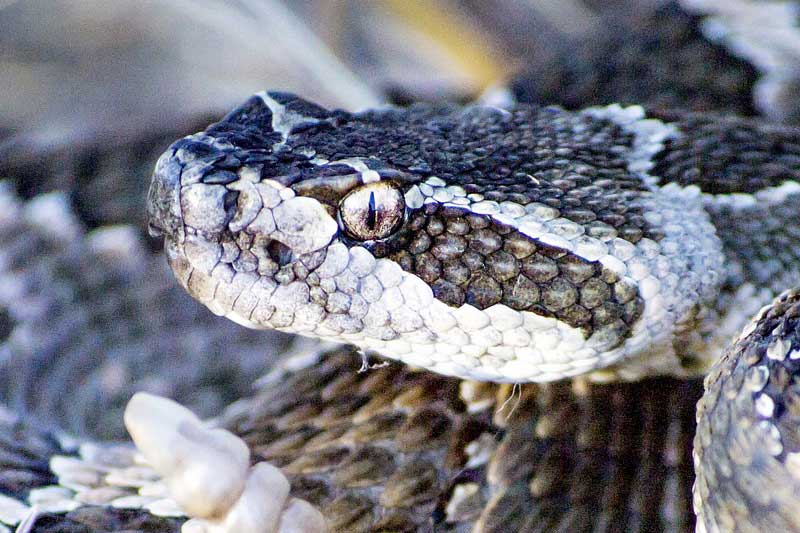 7. Baby rattlesnakes are NOT more dangerous

8. Their rattle gets longer when they shed

Each time a rattlesnake sheds its skin, it gets another segment on its rattle. Adult rattlesnakes shed 2-3 times a year, and rattlesnakes can live for a long time. This means that the number of segments on a rattlesnake’s tail, is an indication of the snake’s age.

9. They sense vibrations through their jawbone

A snake’s hearing is different from ours. A rattlesnake’s inner-ear is connected directly to its jawbone. The jawbone sits directly on the ground and detects the slightest vibrations. Scientists still aren’t sure if snakes are able to hear sound traveling through the air the way we do.

10. A rattlesnake’s fangs are retractable

Rattlesnakes have solenoglyphous fangs, which means they fold in when they close their mouth. When a rattlesnake isn’t using its fangs, they stay folded up in the mouth. This is why vipers have the longest fangs of any venomous snake.

11. All rattlesnakes are found in the Americas

Throughout the world, all species of rattlesnakes can only be found in North America, Central America, and South America. They most concentrated area for rattlesnakes is in the Southwestern United States and Northern Mexico.

12. There are as many as 36 species of rattlesnakes

According to Arizona Fish and Game and Wikipedia, scientists have identified at least 36 species of rattlesnakes. In addition, there are believed to be between 65 and 80 subspecies. Rattlesnakes are the largest genus of snakes under the pit viper subfamily.

13. Adult rattlesnakes only eat about every 2 weeks

Like many other types of adult snakes, rattlesnakes only need to eat about once every 2 weeks or so. Juvenile rattlesnakes will hunt for prey and eat more often than adults. Once consumed, the meal can take 5 days or more for the rattlesnake to fully digest it.

14. A rattlesnake’s rattle is used to warn off predators

One of the most commonly known facts about rattlesnakes is that they use their rattles to warn off predators. The rattle lets any animal that can hear it know that it’s a rattlesnake, and very dangerous. Many other types of snakes will mimic rattlesnakes by shaking their tails in a similar way, hoping to trick predators.

15. The eastern diamondback is the largest rattlesnake

At the other end of the spectrum, as the smallest rattlesnake, is the pygmy (or pigmy) rattlesnake. There are 3 subspecies of Sistrurus miliarius, the dusky pygmy, western pygmy, and the Carolina pygmy rattlesnake. Pygmy’s are found in the Southeast United States in states like Florida, Alabama, Mississippi, and the Carolinas.

17. The mohave rattlesnake has the most potent venom of any rattlesnake

A rattlesnake that’s only found in a few areas of California, Arizona, and other neighboring states, is the mohave rattlesnake. The mohave is considered one of the most venomous snakes in the world. For comparison, the toxicity of their venom has been compared to that of elapids such as cobras.

The eastern and western diamondback are still considered more deadly than the mohave, but only because they are larger and can deliver much more venom in a single bite.

18. The sidewinder rattlesnake is the fastest snake in the world

The sidewinder rattlesnake is the fastest snake in the world and has unofficially been clocked at 10 mph hour. The next fastest snakes are the black mamba at 12 mph, and the southern black racer at 10 mph. Sidewinders are very small rattlesnakes and get their name from the way they move across desert sands.

19. Baby rattlesnakes have one rattle segment when born

When baby rattlesnakes are born they only have one segment of keratin for their rattles. As they grow and shed their skin, they will get a new segment after each shed. A rattlesnake will typically gain 2-3 new segments each year of its life.

Like other snakes, rattlesnakes are also excellent swimmers. Just because they are usually thought of as desert snakes that hang out of rocky or sandy terrain, doesn’t mean they can’t swim. Timber rattlesnakes are particularly good swimmers and can swim both above and below the surface of the water.

21. 4 states have no rattlesnakes

Almost all states in the U.S. have at least one species of rattlesnake. The four states that have no rattlesnakes are Hawaii, Alaska, Maine, and Rhode Island. Hawaii and Alaska have no serpents at all, Hawaii because they’re a secluded chain of islands, and Alaska because of the climate. The timber rattlesnake was once found in both Maine and Rhode Island but is now listed as extirpated form the states.

22. Rattlesnakes can live for over 25 years

While most rattlesnakes do not live this long in the wild, they are certainly capable of it. When in captivity, it is pretty common for a rattlesnake to live 10-25 years or more. The oldest rattlesnake on record is named “striker” and is turning 32 years old this year.