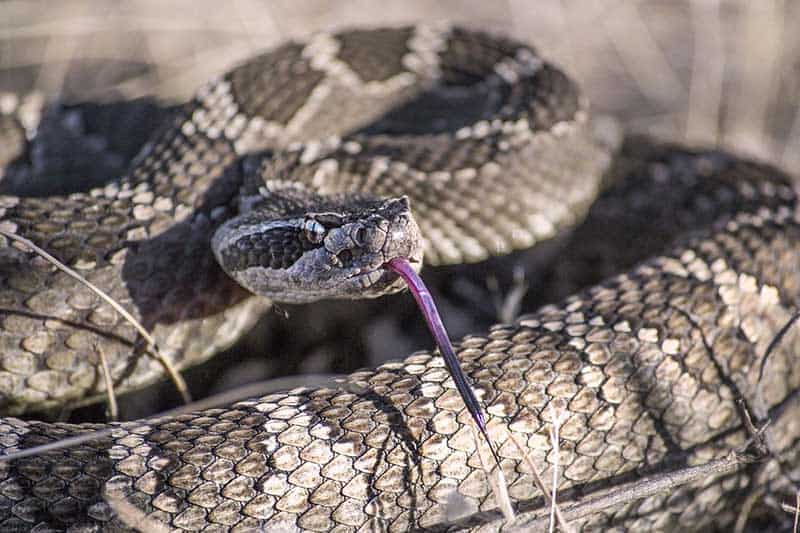 California has a huge variety of habitats, from sunny beaches to dry desert, temperate rain forest and wooded mountains. You’ll find rattlesnakes in nearly every part of the state, but there are certainly more species concentrated in the southern half. In this article we’ll look at 11 types of rattlesnakes in California.

Let’s get right to it!

T​he 12 Types of Rattlesnakes in California

One of the most common snakes in North America, the Western Diamondback’s range in California is limited to southeastern portion of the state. Like the name suggests, these snakes have a distinctive diamond pattern down their backs. While this pattern is universal for the species, the exact coloration of the snake will vary greatly depending on where they live.

T​he background color can be gray, brown, tan, or yellow, while the diamonds are always brown or black. The tail is marked with black and white rings leading to the rattle. These desert-dwelling vipers are primarily nocturnal, and they feed mainly on small rodents.

Sidewinders are named for their unique method of movement. Rather than moving as most snakes do- with the body following in a line behind the head- sidewinders move in a direction perpendicular to their body. Since this method of movement is common in many other species of snake that inhabit sandy deserts, it’s thought to have advantages for moving through deep, windblown desert sand.

Sidewinders have relatively weak venom (for a rattlesnake), and their deep desert habitat makes encounters with humans rare. They feed on small lizards as juveniles, while adults prefer to hunt rodents. They are one of the smallest types of rattlesnakes in California.

A​ subspecies of the sidewinder, the mohave sidewinder lives throughout the mohave desert, one of the hottest and driest places in the world. They can be easily mistaken for western diamondbacks because of the similar coloration, but the sidewinder lakes the black and white rings on the tail.

O​f course, if you see one in motion there’s no mistaking a sidewinder for anything else. You’re unlikely to see one at all, though, since they hunt by burying themselves in the sand, with just the very top of the head exposed, waiting for unsuspecting rodents to walk by.

Common throughout the southwest, the speckled rattlesnake is found in most of Southern California. It has a light brown, tannish color with darker speckles throughout. Like most rattlesnakes, it’s primarily nocturnal and eats mainly rodents.

I​t lives in Southeastern California’s desert regions, where it hunts lizards and birds in addition to rodents. It has some of the broadest color variations of any rattlesnake species, which can make identification in the field difficult.

One of the largest and most beautiful rattlesnakes in California, the southern pacific rattlesnake can be found in southern parts of the state, mainly in the coastal regions. It tends to have darker and more vivid color patterns than other species, and can be melanistic- meaning that come individuals are all black in color.

T​hey live in many different habitats, including beaches, mountains, forests, and desert scrub. They feed on birds, lizards, and small mammals. They are, in turn, commonly eaten by other snakes, especially kingsnakes and red racers.

These massive snakes are found in northeastern California, where they like to dwell in grassy plains, agricultural areas and rocky hillsides. They have varying colors, depending on their habitat, but the back has dark blotches with lighter centers.

G​round squirrels and rabbits are favored prey items, which means these snakes are actually somewhat beneficial to farmers, as they eat animals that would otherwise damage the crops.

T​his species has the widest range of all of California’s rattlesnakes, living throughout almost the entire northern portion of the state, including every type of habitat there. Birds, lizards, and other snakes are some of their favorite prey.

T​heir color varies widely, ranging from gray to tan to brown with dark splotches on the back. The contrast between the color and the splotches can give them a striking appearance.

This species of rattlesnake is endemic to California and can only be found in extreme southern areas of the state and in Baja California. Red diamond rattlesnakes are not endangered or protected, they just have a very small range.

They have one of the least potent venoms of all rattlesnakes in California, as well as compared to species in other states. Red diamond rattlesnakes are commonly referred to as red rattlesnakes or simply red diamond snakes, and are considered moderate in size for rattlesnakes.

Infamous for having one of the most potent venoms of any rattlesnake, the mohave (or mojave) rattlesnake, aka mohave green rattlesnake, lives in the mohave desert, but actually most of its range lies outside of that region. In California, however, the Mojave Desert is the only place you’ll find it.

T​his subspecies is more common in California than the namesake mohave rattlesnake, and it’s closely related. They like grassland and desert scrub, where they prefer foods (rats, mice, and lizards) can be found in abundance.

Like the mohave rattlesnake, the northern mohave is one of the most venomous snakes in the world. They will be very similar in appearance so refer to the image of the mohave to see what they look like.

T​an in color with slightly darker tan patches along the back, the panamint rattlesnake is mainly a desert dweller and prefers open habitats. They do inhabit mountainous areas, though, and can be found from California’s central valley all the way through the Sierra Nevada mountains.

S​mall mammals, lizards, and birds are their preferred prey, and they’re hunted in turn by the kingsnakes that share their habitat.