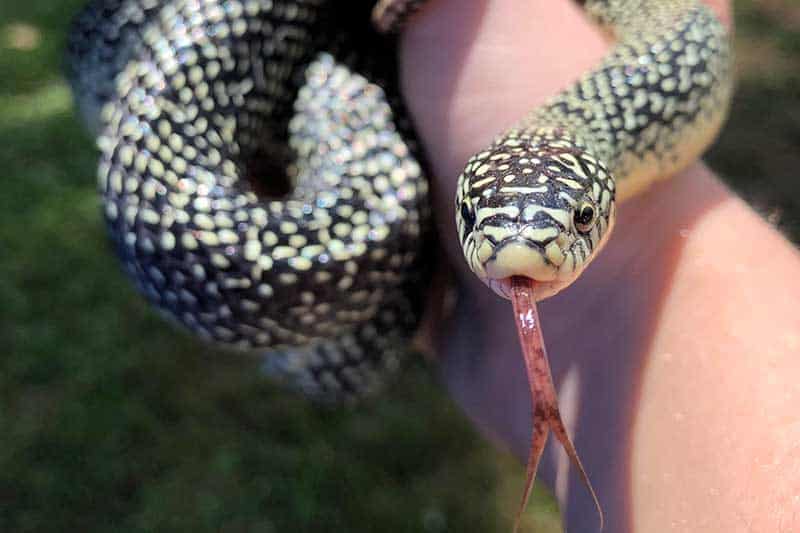 At 43,566 square miles of land, Louisiana is ranked 33rd overall in terms of total land area. However, it’s ranked number 4 with 8,277 square miles of water area. Louisiana has around 2.5 million acres of wetlands and 15 million acres of forests. Louisiana’s ecosystems are home to many different types of wildlife, including several types of kingsnakes. In this article we’re going to be talking about 6 types of kingsnakes in Louisiana.

Let’s have a look at the species found in the state, and learn a little bit about each one!

The prairie kingsnake, a subspecies of the yellow-bellied kingsnake, is found in much of Northern and Western Louisiana. This snake usually reaches around 3 feet in length as an adult and can be found in grasslands and woodlands, often hiding under a log or a rock.

Prairie kingsnakes are green and brown on top with yellowish underbellies, they’re known for being secretive and elusive so they aren’t seen very often.

Kingsnakes like this one feed on a variety of small rodents, reptiles, and amphibians. However the primary food source for kingsnakes is commonly other snakes. Prairie kingsnakes are most active in April through November. Females of this species will lay between 5 and 17 eggs.

Speckled kingsnakes are a subspecies of Lampropeltis getula, aka the common kingsnake. This subspecies is found in most of Louisiana, though they don’t occur in Southeastern parts of the state where the next species does. They’re easily recognized by their yellow and white speckled patterns.

Speckled kingsnakes grow to about 4 feet in length as adults and often live near swamps, streams, rivers, and other wetlands. Like other kingsnakes they feed on reptiles, amphibians, small mammals, and many times other snakes.

The eastern black kingsnake is common only in Southeastern Louisiana. This common kingsnake subspecies is not common in Northeastern or Southwestern Tennessee however. They are sometimes referred as the black kingsnake.

One of the most recognizable and famous species of kingsnakes, is the scarlet kingsnake. It was once referred to as the scarlet milksnake, because it was thought to be a subspecies of the eastern milksnake. Its colors and appearance is very similar to the colors of the highly venomous coral snake.

In Louisiana these snakes only occur in extreme eastern and southeastern parts of the state, including near Baton Rouge.

While not referred to as kingsnakes, milksnakes are in fact part of the kingsnake genus. Louisiana milksnakes are only found in a few states in the Southeast United states, this includes Western Louisiana. I couldn’t find an official range map for Lampropeltis triangulum amaura, so I made a crude one below based on what Texas.gov reported about the species distribution.

Milksnakes are considered coral snake pretenders, meaning they mimic their flashy colors and use that as a defense mechanism against predators. The Louisiana milksnake is the only known species of milksnake to occur in the state of Louisiana.

You may also like: 6 species of kingsnakes in Texas

Another subspecies of the yellow-bellied kingsnake, the mole kingsnake is named for it’s habit of spending much of it’s time underground. They’re usually light reddish brown in color with darker elliptical spots down their back. They rarely get bigger than about 40 inches in length.

Mole kingsnakes aren’t common in Louisiana, but have been spotted in a few of the far eastern parishes. Since rodents are their main source of food, it’s actually a good thing to have them around. They can make a huge difference in the size of the rodent population.