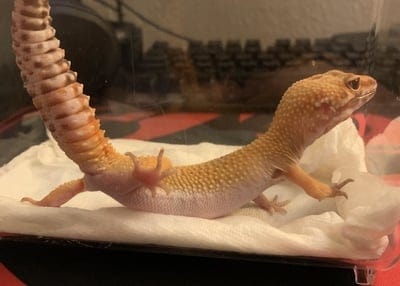 Why does my leopard gecko arch his back?  You will often find that a leopard gecko will arch their back while being petted simply because some of them don’t enjoy the feeling of it or feel threatened when it’s done.  While this is true for some leopard geckos, it’s most certainly not true for all of them.

If your leopard gecko only arches their back while getting their back rubbed, then just know that you are not alone and that many other geckos do it as well, so there’s nothing to worry about.  If they’re arching their backs under any other circumstances besides when being petted though, then there may just be other issues at hand that you aren’t completely aware of yet.  Let’s learn more.

Here’s How It Works

You may be wondering why in the world arching their back is a gesture that they showcase when threatened but it’s actually a little more useful than you might think.  From what I’ve seen, this gesture usually isn’t one that’s accompanied by aggressive behavior, but it is an indicator to let whatever they see as a threat know that they should back off.

This doesn’t only apply to creatures in the wild though, but with other leopard geckos as well if you’re someone who cohabits two or more of them together.

The reason for that is because leopard geckos can be very territorial, so if they see another leopard gecko as a threat, they’ll arch their backs the same way they would when being petted by their owner.  And even though they can grow to be fairly big in size, they are relatively small animals.  So if there’s anything they can do to make themselves seem any bigger, they’ll definitely do it.

Also, because cohabiting two leopard geckos together can be dangerous, it’s always best to separate them if any of them start to display the arching-back gesture.  Leopard geckos that don’t get along can get very aggressive to the point where one might take another one out or at the very least inflict serious damage.

So if this happens, get the two fighting geckos away from each other immediately.

Unfortunately, if you have two temperamental geckos that aren’t getting along now then chances are that they never will, so in order to solve this issue once and for all, you’ll either need to rehome one of your leopard geckos or place them in different enclosures.

If you decide to go with the latter, then I recommend placing your problematic gecko in a tank like this one here from Amazon.  It’s the one I currently use as my main tank for my leopard gecko and I absolutely love it.

If you’re anything like me, then you know that rehoming a pet is never an easy thing to do.  So if you’re stuck in a situation where you have to pick between the two, keep in mind that you can always keep both geckos as long as they’re apart.

Just like any other animal, these lizards will go at it if they don’t get along.   And once you start seeing one gecko display behavior of dominance to another gecko such as the back arch, then that will tell you that it’s time to remove one of the lizards from out of the tank.

Here’s Where to Pet Them Instead

Leopard geckos generally don’t like to be pet the same way you were to pet a dog or a cat for example, but if I were to recommend an area to pet them instead, then I would say that the head is a much better spot.  I don’t know this to be true for every leopard gecko, but from my own personal experiences, they’re a lot more at ease when it comes to rubbing there head opposed to their backs.

The reason for that could be when touching their head they can see your hand and because of that, they don’t respond to it as a potential threat, but when there back is touched, they can’t see it.  So, as a result, they give a completely different response.

Also, keep in mind that when “petting” them to be very gentle.  Another reason they could be arching their back when touched is because they are being petted a little too roughly.  So before you pet them again, be very mindful of that and see if that makes any difference in their reaction to you when touching them.

Leopard geckos are very loving and caring pets but they are also pets that are very defensive and offensive when it comes to anything that is either touching them or even just around them as well.

So please be respectful towards them whenever they display this behavior and instead of stroking their backs, stroke another part of their body that will allow them to see your hand while doing so instead.

For all they know, your hand could be another animal in the wild trying to attack them and because they don’t know the difference between actually being captivity and being out in the wild, they may or may not continue to display the arch for as long as you have them. 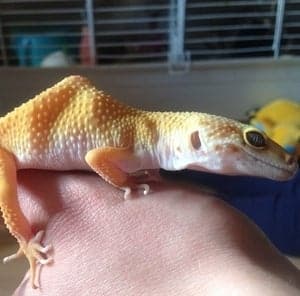 Leopard geckos are so adorable and cute that it can sometimes be hard for us to keep our hands off of them, but when they show signs of discomfort, it’s best that we respect them for multiple reasons.

To us, them arching their backs may not seem like a big deal, but for them, it’s very stressful.  And if you didn’t know, leopard geckos are lizards that can and will get stressed out over the smallest things.

So in order to avoid putting them through that, we should stop touching their backs whenever they arch it.  If you continue to pet them despite the fact that their back is arched they may begin to lose trust towards you and could potentially even become aggressive as well.

Dealing with a leopard gecko that doesn’t trust you is no fun and can take a long time to retrain them into trusting you again.  So if you’d prefer to not go through that with your gecko, which you definitely don’t want to, then show your lizard that you can be a respectful and caring owner by discontinuing the petting.

While it takes quite a bit of time to gain their trust, it can be lost fairly quickly and easily if you do anything that could potentially make them not like you.  That’s because leopard geckos can be divas sometimes, so pleasing them and giving them what they want and avoiding doing things that they don’t want will be the very best way to ensure that you’re keeping their trust.

Although they are animals, leopard geckos need respect just as humans do and won’t trust being around you if they feel that they are not getting it.

Unless your leopard gecko’s back is fixated in an arched position do due health reasons, then this behavior is nothing that you should be worried about.  Leopard geckos are known to show off all kinds of different and unique behaviors, and it’s our job as owners to find out what these behaviors mean so that we can get a better understanding on how to react to them when they display them.

There have been many reports of owners experiencing this particular behavior not only within popular forums but on video as well and while a lot of leopard geckos arch when touched on their back, not all of them will do it.

Leopard geckos are small lizards so, in order to ensure their survival whether that be in the house or out in the wild, they’ll sometimes perform this arch to make it seem like they’ve increased their size in attempts to hopefully fend off a potential predator.

Remember, if this is something that your leopard gecko does, then respectfully discontinue touching them and give them their space so that no further stress is caused and no trust is lost between the two of you as well.