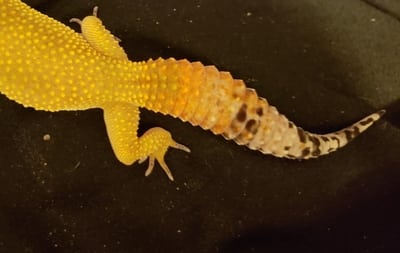 No matter how it happened, an injury to the tail any other part of your leopard gecko’s body is never fun to deal with.  Cuts and injuries require special attention, care, and love and without these three things, your leopard gecko’s injury could become much worse than it already is.  Because there’s no one way a leopard gecko could receive a cut tail though, here are few examples.

Why does my leopard gecko have a cut tail?  Their tail could be cut for a few reasons and that includes from fighting with other leopard geckos within the tank, rubbing their tails on rough surfaces during a shed, or from insect bite injuries.

Luckily, cuts often aren’t that serious and can heal fairly quickly if the right steps are taken.  If not, they could become infected enough to the point where a veterinarian visit might be necessary or where the tail might come off altogether.  In order to prevent any of these things from happening, I suggest reading on to know exactly what you can do to ensure a fast and healthy recovery.

When dealing with any type of injury, the first thing you’ll want to do is remove any dirty substrate within the tank that could potentially cause your leopard gecko’s cut to turn into an infection.  To the naked eye, your substrate may look clean.  But, if it hasn’t been replaced in a while, then more than likely it is heavily soiled with your leopard gecko’s urates and fecal matter.

If you don’t have a backup tank (which you should if you own multiple leopard geckos), you’ll need to place your leopard gecko in a temporary container called a Faunarium while you replace their substrate and wipe down anything else that your leopard gecko frequently comes in contact with.

Luckily, I’ve never experienced a cut tail from my leopard gecko for as long as I’ve owned him.  But, when I do need to change his substrate or clean his tank, I place him in this container here that I picked up from Amazon.

If you do happen to own a backup tank, then a Faunarium isn’t needed and placing them in there instead will be just fine.  As far as the substrate goes, how you clean or replace it will depend on what kind you have.

Some substrates are easy to clean off while others are more difficult, so make sure you’re really thorough replacing and cleaning any substrate you have and be sure to clean up any bacterial residue that might be sitting at the bottom of the enclosure.

If there’s one important thing that will stop your leopard gecko’s cut from getting worse, then this is it.  Substrate holds the most bacteria out of almost anything else in the tank, so replacing or cleaning off what you have will make all the difference in making sure your leopard gecko’s tail stays clean while it heals.

Now that the substrate has been clean or replaced, it’s now time to treat the cut.  In order to effectively do that, you’ll want to get your hands on a solution that is meant for killing bacteria.  There are many different antibacterial solutions out there that you can choose from but I like to keep this brand here on-hand called Betadine.

For dropped tails, you’ll want to dilute this solution with water and soak your leopard gecko in it for 15-30 minutes each day until the wound has healed over, but for a simple cut, dilution isn’t needed.

In the case that it’s cut, all you’ll need to do with this stuff is spray or dab a little of it on a cotton swab and then apply it to your leopard gecko’s cut every day until again, it heals over.  Just make sure that when you’re cleaning your leopard geckos cut that you wash your hands beforehand and in addition to that, using disposable latex gloves as well.

I’m not 100% sure how long it will take for your leopard gecko’s cut to heal because they all heal at different rates and the recovery time can vary depending on how big the cut is, but if you keep dabbing this on their cut daily and making sure it’s staying clean, then it should close up in no time. 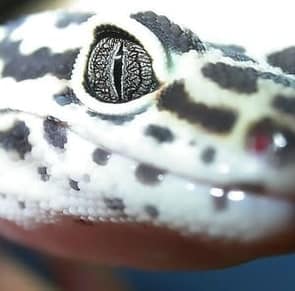 Whether your leopard gecko sustained a cut from a potential attack from another leopard gecko or from an insect bite, you’ll want to make sure you remove the threat so that their cuts don’t get any worse.

We as owners would love for our leopard geckos to get along with other leopard geckos that we place inside the tank.  And while some of them do really well together, others don’t.  You might think that the more time they spend together the more they’ll get used to each other, but, this is usually never the case.

In fact, things will likely only get a lot worse and neither of the geckos will stop fighting with each other until one of the leopard geckos has “gotten rid” of the other one for good.

Aside from permanently separating them, rehoming the aggressive leopard gecko is always another option as well but doing that is never easy and it would also be a shame to have to do just because they were acting on what their brains were hardwired for.

Instead, the more preferable option for most is to place one of the geckos in another tank.  You’ll have to take into consideration buying other equipment and whether or not you have enough room in your home for another enclosure, but for me and many other leo owners, rehoming a leopard gecko is just not an option.

Sometimes, getting more equipment for another lizard can be a hassle.  But before pairing two or more of them together, all owners should be prepared for this to happen just in case their leopard geckos get into a fight and a separation has to be made quickly.

If you’d like to know the tank that I currently use for my leopard gecko and also for my backup, then check it out here over on Amazon.  It’s a great tank to use for your main enclosure or as a spare and won’t completely break the bank like other enclosures will.

Crickets have been known to hop at reptiles and take small bites at them that eventually turn into little cuts, so when placing them in the tank, be sure to count how many were put in and also make sure that they’re not attacking your leopard gecko as they try and catch them.

They might seem small and harmless to us, but to leopard geckos, they pose a real threat.  Other insects such as locusts and Dubia Roaches could also inflict damage to your leopard gecko.  So, if you feed your leopard gecko either of those two insects as well, please keep that in mind.

Their small bites may not seem like a big deal, but if there’s enough of them, they can potentially cause serious health issues for your leopard gecko.

As you can see, there are many ways a leopard gecko can sustain a cut tail.  But how fast they recover from it or how bad it gets will completely depend on the care you give them after they sustain it.  As I stated above, cuts are not fun to deal with.  Fortunately, though, they’re not the end of the world and can be healed up pretty easily.

All you’ll need to do is keep an eye on whatever caused the cut, clean or replace the substrate to avoid a bad infection, and apply an anti-bacterial solution to the affected area to kill any germs that may enter the cut after replacing the substrate.

If you do this, then your leopard gecko should heal up in no time and go back to how they were before they received the cut.  After it’s healed, be sure to practice caution with whatever caused the cut in the first place so that it doesn’t happen again.

Although they’re easy to heal, it’s not something that your leopard gecko wants to experience time and time again and could even cause them to be in a constant state of stress depending on what exactly caused the cut.