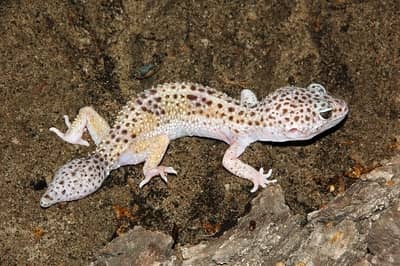 If you’ve ever seen the aftermath of a leopard gecko dropping its tail, then you know how painful it looks.  The severed area looks raw, red, irritated, and a little unappealing.  And with the way it looks, it’s hard to believe that they didn’t experience some sort of pain when they dropped it.  Because I was unsure on whether they did or not though, I decided to do some research and this is what I found.

Does it hurt when a leopard gecko loses its tail?  No, it doesn’t.  Their tail has adapted to breaking off naturally and painlessly in situations where they are extremely stressed or threatened.  While this defense mechanism is more useful in the wild, it can and still will happen in captivity as well.

It’s always sad when a leopard gecko loses its tail because even though it’s natural, it means that they were put under great amounts of stress in order for them to get to the point of actually dropping it.  Despite how tragic it is though, it’s great that they feel no pain whenever it happens because at first glance, it definitely looks like it hurts.  Let’s see what else we can find out about this phenomenon.

Why Do Leopard Geckos Lose Their Tail?

It’s amazing what the leopard gecko is capable of doing in times where they have to defend themselves whether that be hiding in small and narrow spaces, making unusually loud and intimidating noises for their size, or detaching their tails for a quick getaway.

Because they’re so small, they have to do whatever is necessary to keep them alive, and that includes dropping a large part of their body off just to survive.  They do it because in the wild, it’s a very useful mechanism to have when getting attacked by a predator.

Not only that, but it can be useful when defending themselves from other leopard geckos within the tank for those who cohabit as well.  I’m not against cohabiting as it has been proven to work out depending on which genders of geckos are together and how their personalities are, but for the ones that don’t seem to want to get along, it can bring on just as much stress as it would in the wild and as a result they will drop their tail.

Because of that reason alone, I always recommend separating your leopard geckos just in case things get a little too crazy.  Obviously, in order to do that, you’ll need to house them in a different tank.  I know it can be a hassle, but it’s better to be safe than sorry when it comes to housing two leopard geckos together that don’t like each other.

There have been plenty of times where a leopard gecko has dropped their tail in the tank due to stress from either the environment or because of other leopard geckos, so make sure to keep prepared just in case something like that happens to you.

What to do if your Leopard Gecko Loses Its Tail

Although the process of actually dropping the tail is painless to them, they will still need special care afterward to ensure that they recover from the loss in a safe and timely manner.  In order to accomplish that, you’ll want to do a few things.

If you think about it, a tail drop for a leopard gecko is kind of a traumatizing experience as they’ve just undergone a lot of stress that caused them to drop it.  With that said, it’s best to give them tons of space to recoup and calm their self down so that they’re not in any further unnecessary stress than they’re already in.

Leopard geckos can handle quite a bit of stress, so if it gets to the point where they’re dropping their tail, that means that they’ve reached their peak and can’t take anymore.  And although dropping their tail is a defense mechanism, it happens due to extreme amounts of stress whether they’re being attacked or not.  So just make sure to keep that in mind if you ever experience it with your gecko.

2.  Care for the Fresh Wound

Now that they’ve calmed down and collected their self, you’ll now want to treat the wound by cleaning any bacteria in it that may cause a serious infection that could make the healing process complicated for them.

In order to do that, you’ll want to do two things and that’s applying a reptile-safe first aid solution that kills germs and gently wiping away any substrate that may be stuck to the open wound.  Before applying the solution, you’ll want to remove any substrate chunks off first so that there’s nothing on it when you apply it.

For that step, you can wet a clean and preferably never used wash rag with lukewarm water and then gently rub the raw area until the substrate is off.  After that, it’s time to put on the solution to further kill anything on the wound that you’re unable to visibly see.  In order to do that, I recommend using some first aid solution.

Thankfully, I’ve never had to use any of that solution for a dropped tail, but for cuts and scrapes that I’ve had to treat, that stuff works great for sanitizing the affected area.

I usually don’t recommend doing a deep clean of the tank but only once every month, but when it comes to a dropped tail, you’ll need to clean it a tad bit sooner to, again, avoid any bacteria from getting inside of it.

The reason why this is extremely beneficial is because over time their tank becomes naturally dirty and soiled from various different things that are put into the tank and also from things that are left by your leopard gecko as well.

This includes insect parts, urates, poop, calcium powder, and so on and so forth.  Because your leopard gecko is constantly in contact with all of these things, it’s best to keep the tank nice and clean not only when they drop their tail, but also in general as well.

If you have a spare, empty tank that is up and ready to go, then I suggest putting your leopard gecko in that one while you clean out the one that they primarily stay in.  If not, then I recommend placing them a small plastic travel terrarium.

Leopard geckos are most comfortable in larger areas, especially if they’re grown, but if that’s not possible, then placing them in something a little smaller while you clean the tank will do just as fine as well.

4.  Incorporate Fatty Insects into Their Diet 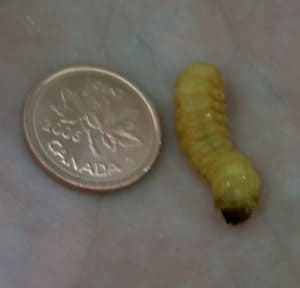 In case you didn’t know, a leopard geckos tail holds a lot of fat reserves.  These reserves allow them to go somewhat long periods of time without food by providing them with fat, water, and other nutrients that they need in order to survive.

While having a thick and fat tail isn’t as useful as it is in the wild, it is still something that they need in order to live more healthily and without it, they may need more special care than usual as they won’t be getting the proper nutrients from their tail anymore.

This doesn’t mean that your leopard gecko will live a less meaningful and unhealthy life, but it could potentially change the way their diet is and how hungry they get because they won’t have anywhere to store the extra fat and nutrients once the tail has fallen off.

Don’t worry though, because even though they won’t have the tails that you’re used to seeing them have anymore, they’ll still be able to live a healthy life once their shorter and less fatty tail grows in, which is what happens once they’ve dropped the tail that they were born with.

In order to make sure that their tail grows back in as thick and healthy as possible, it’s best to consider adding in a few fatty insects into their diet in order to make that happen.

These insects include wax worms and butter worms and are great for providing your leopard gecko with fat, but please keep in mind that they’re addictive and can cause your leopard gecko to be a picky eater and pack on a little too much weight, so only feed them one of either one once every two weeks.

If you’d like to know the ones I get, then check out this page here that I’ve put together and scroll down to the bug of your choosing and get what you need.

Losing a tail for a leopard gecko is traumatizing and it causes them to lose a lot of what they need for their bodies to perform at it’s best, so adding a few fatty insects here and there can really help them regain their health again and will ensure that they’re getting what they need in order to survive even without their tail.

It doesn’t hurt for a leopard gecko to lose its tail, thankfully, but it does cause a pretty big impact on their health.  So if it ever happens to you, be sure to give them their space, clean the wound and their terrarium, and feed them plenty to make sure they’re regaining all of the fat and nutrients that they’ve just lost and they should heal up smoothly and without any issues.