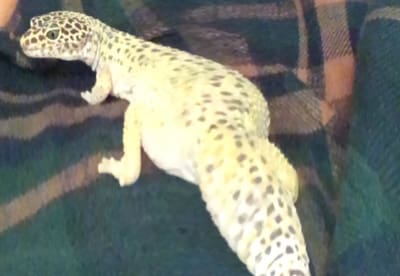 A leopard gecko’s tail is arguably one of the cutest parts of their body but because they’re so chunky, it often leads owners to wonder why they are.  The truth is that their tails play a very important role in maintaining their health and because of that, it’s important that they try to hold onto them for the rest of their lives.  For the answer to the question though, please read on.

Why do leopard geckos have fat tails?  Their tails are fat because they’re stored with food, nutrients, and water.  Having these things stored allows them to go long periods of time without eating by taking what they need to survive out of their tails.

Leopard geckos who are captively kept don’t have to worry about running out of food, but because they are animals that come from environments where food can sometimes be scarce, being able to take what they need from their tails is very critical for their survival.  If you’d like to know how to protect their tails along with ways to make it fatter, here’s how. 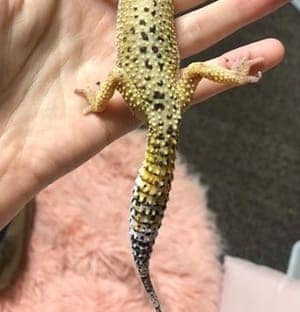 Hopefully, all leopard geckos have nice, thick, and chunky tails.  But for those who have leopard geckos that don’t, it’s best to feed them a variety of different foods so that you can allow your gecko to gain weight in it slowly over time.

There are insects out there such as wax worms and butter worms that are high in fat that will assist your gecko in gaining weight, but because they can become addicted to them and cause them to gain way more weight than what’s healthy for them, these types of bugs should only be fed as treats, which for leopard geckos is about once every two weeks.

Instead of feeding them bugs like that all the time, the very best thing you can do in helping your leopard gain weight is to just simply provide them with many different bugs that carry different types of nutrition.

Not only is helping them gain weight this way healthier, but it’s also more beneficial to their health as well.  Yes, feeding a leopard gecko insects that are super high in fat will help them gain a ton of weight in a short amount of time, but unfortunately, there are many downfalls that come with that.

Feeding them a variety will be a much slower way to get them to gain weight, but it pays off in the long run and will ensure that they’re staying healthy.

Just think about it, would you rather gain weight fast by eating cake, pizza, and ice cream every day and have complications in the future or would you rather eat healthier foods and gain it over time?  Hopefully, you went with the latter.

If you did, then I recommend checking out this page here.  It’s a list of all of the bugs that I feed to my leopard gecko not only to provide him with a variety but also for maintaining his weight as well.

While it’s true that leopard geckos can go quite some time without food because of their ability to get what’s needed from their tail, it’s not recommended that any owner stop feeding them as doing so would be harsh and detrimental to their leopard gecko’s health.

The reason for that is because although they can pull food, water, and nutrients from their tails when needed, they should only do it in situations just like that, whenever they absolutely need to.  Their tails should only be used in emergency situations and they should never be put in a position where they have to frequently use it because of a lack of food or water.

As stated above, they come from environments where food can be really hard to come by due to other predators taking it or in the winter where a lot of their prey either die or hibernate.  So in situations like these where they actually need to use their tails for nutrition, it’s okay.

But while in our tanks, they should have what they need at all times.  If they’re constantly taking the stored nutrients from their tail then eventually it’ll start to get skinnier and skinnier and over time they will start to lose weight.

While in captivity, their tails should be used as more of an indication of how healthy they are instead of being used to supplement themselves because they’re not getting the right amount of food or water. 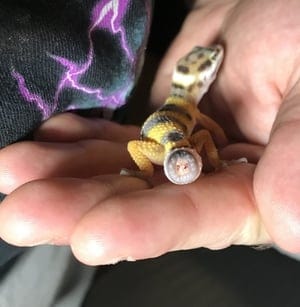 Whenever a leopard gecko drops their tail, they have the ability to grow back another one, but because their new tail is never as chunky or healthy-looking as their original tail, it’s important that we’re protecting it at all costs.

The reason for that is because their new or secondary tail usually grows back very short, less chubby, and a lot thinner and because of that, they’re unable to store as much food, water, and nutrients as they were previously able to when they had their much fuller and chunkier tail.

They can live long and normal lives without their original tail, but making sure they’re getting the right amount of food needed with their new tail is a little more important because of the risk of them potentially losing weight a lot quicker from not being able to take what’s needed from it whenever they need food or water because of how small it is.

Another thing you’ll want to avoid is leaving two aggressive leopard geckos in the same tank.

Although some disagree, I believe that cohabiting is completely fine, but if you have two leopard geckos that just don’t want to get along, then you’ll need to separate them as one of them can bite the other one’s tail causing it to fall off or stress them out enough to the point where the stressed out gecko will eventually drop it on their own.

That said, there are two things that can be done to prevent either of these things from happening.  These things include either rehoming the aggressive leopard gecko to avoid further attacks or putting one of them in their own separate tank for the same exact reason.

Assuming that most owners don’t want to rehome their leopard gecko, I recommend taking a look at this tank here from Amazon to prevent any major tail injuries or any other injuries that may take a toll on your leopard geckos overall wellbeing.

Not only are dropped tails or tail injuries in general tragic for a leopard gecko to go through, but it also takes a lot of effort from the owner to keep these types of injuries clean and sterile while they’re in the process of growing in their new one.

You would need to remove and clean out everything in your tank, change your substrate, and consistently manage their injury until their tail starts to grow back.  While it may seem easy, it can be quite taxing when you have to do it every day just to make sure that it doesn’t get infected from the bacteria lying all throughout the tank.

This bacteria can come from feces, urates, and even from dead insects that are hidden in hard-to-reach places within the tank.  So before you do something or put your leopard gecko in a position to where they could potentially sustain some sort of injury to their tail, be mindful of all of the things that both of you have to go through if it ever were to happen.

Leopard gecko tails come in various different sizes from long to short all the way to extremely fat to a little skinnier, but they all have one thing in common and that’s to store the things needed in it in order to help them survive.

If their tails ever happen to get injured, then it’s best to treat them immediately so that they don’t potentially end up falling off.  Their tails are very cute but at the same time, they’re also used for maintaining their health in times where they need it.

So because of that, it’s best that we’re making sure nothing happens to them so that they don’t potentially lose it and have to live the rest of their lives without a full and chunky tail.  If you follow the advice listed above, you shouldn’t ever have to worry about that happening.

Leopard geckos don’t drop their tails easily but when they’re pushed past their breaking point or put into a dangerous situation where another animal has bitten it off, it can take a huge hit to their health and because of that, they’ll likely require a little more care than they would have needed had they not dropped it.