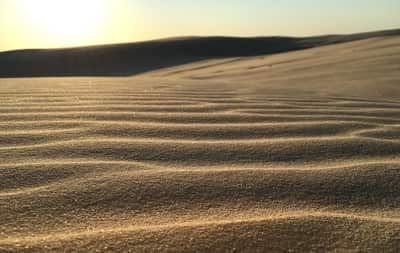 Between winking, sleeping in odd places, aggressively staring at their owners, and making random noises, leopard geckos do a lot of things that some owners may consider to be a little odd.  And just like all of the other behaviors mentioned, kicking sand is one of those odd things.  And because it’s considered to be odd, I’m now going to go over why they do it.

Why is my leopard gecko kicking sand?  Surprisingly enough, leopard geckos will usually kick around their sand for no apparent reason.  Leopard geckos are commonly known for displaying this random behavior and it’s something that many owners experience at some point while owning them.

To some, watching their leopard gecko start kicking around sand out of the blue may be a bit concerning but because many owners have experienced it, it’s usually nothing to be worried about.  While there’s no real reasoning why they do it, it’s speculated that it’s done to make a certain spot in the tank in which they’re kicking a little more comfortable to lay or rest in.  Let’s dig deeper. 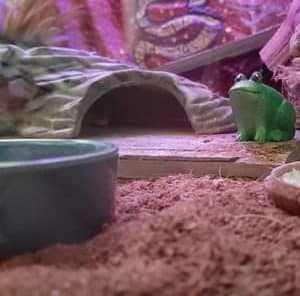 I know this isn’t an article about the safety and hazards of certain substrates, but because sand is generally considered a very unsafe substrate to house leopard geckos on, I feel like it’s worthy to go over it a little bit so that you’re not putting your leopard gecko at risk of having future complications with their overall health and wellbeing.

That said, I suggest checking out this article here that I wrote so that you can get a better idea of what exactly sand is capable of if consumed by your leopard gecko.  Every owner is free to house their leopard gecko on whatever substrate they choose to house them on, but by doing so, you’re taking a huge risk that can otherwise be avoided by using much safer alternatives.

I covered this in the article that I mentioned above, but if you’re looking for a much, much safer substrate to use, check out this stuff here over on Amazon.  You may have already heard about it, but it’s called Eco Earth.  It’s the substrate that I currently use and have always used in my leopard geckos tank and I couldn’t be happier with it.

There are different types of sand out there that owners use that are safer than others but even though that may be true, all forms of sound are fairly dangerous for leopard geckos to be on and could cause impaction in your lizard if it’s consumed.

Impaction can sometimes be treated if it’s caught early enough but a lot of the time it can’t be and because of that, it can lead to an early end for your gecko as a result.

The act of kicking sand around the tank is pretty normal as most leopard geckos who are placed on it participate in doing it but because there’s always the risk of sand being kicked into places where it shouldn’t be, it can be a cause for concern if you’re not frequently keeping an eye on your tank.

The reason for this is because when a leopard gecko kicks sand around, they don’t care where it lands.  It can land all over there food bowl, calcium dish, and wherever else and they wouldn’t care.  Because they don’t care, this puts them at risk of accidentally consuming it whenever it lands in somewhere like their water bowl because as we all know, sand does not dissolve.

When they consume it, they won’t be consuming it in large quantities as they would if they were to just eat it directly.  But over time, it can pose a threat to their health if their body continues to store it without being able to pass it out the other end.

If your leopard gecko kicks sand around frequently, then this could be a problem that you could be facing on a pretty regular basis.  Monitoring their tank can help minimize the risk of them consuming the sand but because that’ll take a lot of emptying out their bowls, filling it back up, and constantly keep an eye on them, doing so can be quite difficult.

Instead, it’s best to just change substrates altogether.  As mentioned above, Eco Earth is what I use in my leopard geckos tank, but if using that particular substrate isn’t something you’re interested in, there are other substrates out there that are just as safe.

If you haven’t clicked on the article I linked above already, you will see that there are other substrates such as newspaper, slate rock, stone tiles, and others that are much better to have in your tank that you can choose from.

Many owners believe that sand is safe because it is sold by popular brands, but unfortunately, this is simply not true.  Switch over to a better and safer option and you won’t have to risk putting your leopard gecko in danger or spending a bunch of time and energy constantly cleaning out their bowls. 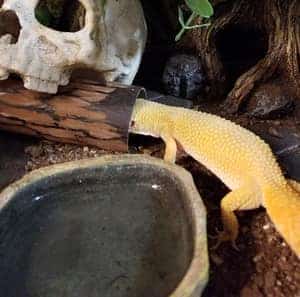 If you don’t want to change substrates, which I highly recommend you do for the safety of your gecko, then the next best thing you can do is move your bowls to a spot where sand can’t reach them if your leopard gecko has a designated spot where they like to kick it around.

There will likely not be a lot of room for you to move your bowls around in unless you have a fairly large tank since each bowl has to stay on certain sides of your enclosure, but if possible, move the bowls as far away as you can so that you minimize the risk of sand getting in them.

This might sound simple, but because most leopard gecko owners have 20-gallon tanks, this might require moving a lot of equipment around just so it’ll be out of the way whenever your gecko decides to kick sand.

Don’t get me wrong, 20-gallon tanks aren’t small and they’re actually the ideal size to have any leopard gecko in.  But because leopard geckos can sometimes kick sand pretty far, it can be hard to move your gecko’s bowls far enough away to not get sand in them.

If you feel that this might be an issue for you, then there’s no way around it but to get a larger tank.  Having a larger tank will give you the space needed to move your bowls around without struggling with finding a spot to place them at.

Just remember that no matter where you decide to move your bowls, that your water dish should be on the cold side of the tank. This can prevent too much humidity.

The food dish should be placed on the hotter side of the tank so that your leopard gecko can have the warmth needed to properly digest their food.

If you’d like to know where to get a larger tank, then I recommend checking this one out here.  Unfortunately, larger tanks can be a bit more costly, but in order to ensure your leopard geckos safety, it’s necessary to get one so that you don’t have problems now or in the future with them consuming sand.

If purchasing another tank isn’t an option at the moment, then you can always build your own as well.  Building a tank will probably be hard to do if you’re not experienced with crafting things out of scratch, but if you know someone who might be experienced enough to do the job, I recommend asking them for assistance with building it.

From what I’ve seen, leopard geckos who do kick sand around don’t do it very often.  So hopefully, getting another tank might not be something you have to do.

For most things that leopard geckos do, there’s always a reason behind why they do it even if it seems like their might not be.  But for this particular behavior, there’s not.  And for those worried about their leopard geckos sand-kicking habits, that’s a good thing.

This behavior can be cute but at the same time, it can be dangerous as well.  Sand consumption in leopard geckos is very serious so whether they’re eating it directly or lapping up bits of it from out of their water bowl, it’s still something that should be taken seriously.

If not, then it’s likely that you will have issues with your leopard gecko going through impaction in the near future.  Leopard geckos can go years without consuming the sand they’re placed on, but even then, they can still try to eat it at any given time in their life.

Leopard geckos can live very long and happy lives, but by placing them on sand, you risk cutting their time short.  But again, each owner has the freedom to place their leopard gecko on whatever they want.  It’s just important to know the risks of doing so in order to potentially prevent having issues with your gecko in the future.