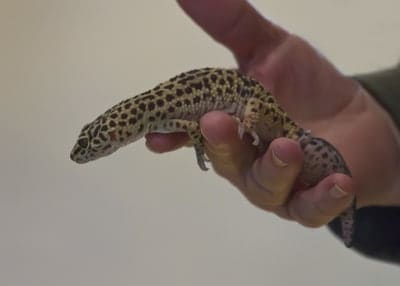 When it comes to pooping, leopard geckos are usually really good at making sure they do it in a designated area within the tank and nowhere else as they are fairly clean and high-maintenance lizards.  But, sometimes, they’ll poop in places that we least expect, including in our hands or any other place on our body we lay them.  To figure out why they do it though, I suggest reading on.

Why does my leopard gecko poop on me?  Pooping is a defense mechanism for leopard geckos, so whenever they feel uncomfortable while in the possession of their owner, they’ll defecate in hopes of being put back into their cage where they find the most comfort.

Unfortunately, many owners go through this with their leopard geckos.  Fortunately, though, this behavior can be stopped with enough time, patience, and training.  To learn how to do that, I suggest reading on.  No owner should be getting pooped on and because I’ve dealt with it myself, I want to help others who are currently dealing with it as well.  Here’s how it can be stopped. 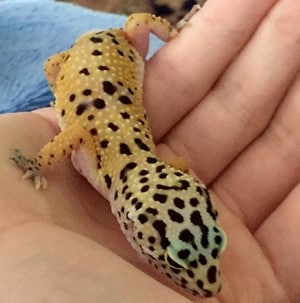 Leopard geckos are small, but they are much smarter than they appear.  When they do their business on your hand after being picked up, they’re expecting you to put them back in the tank.  But because this tells them that every time they do it they’ll get what they want, you shouldn’t put them back in it.

It may be a natural instinct for you to set them down after they’ve pooped on you, but if you do that, they’ll continue to poop on your hand because they will think that in order to get out of being held, all they have to do is poop.

It’s icky and not something that any owner wants to look forward to when picking up their gecko, but in order to get them to stop, you’ll have to fight through the ickiness and continue holding them for an additional 10-15 minutes to really make sure they know that they won’t be getting rewarded for their bad behavior.

Of course, you’ll want to clean the poop off your hand, but whatever you do, don’t set them down.  If you do, getting them to stop pooping on you will be difficult.  Another thing you’ll want to avoid is feeding them after they’ve done it.

I don’t mean don’t feed them at all, but at least wait another 10-15 minutes so that they won’t associate a meal with pooping on your hand.  Leopard geckos have to poop like every other living creature, but they also have to know that it’s unacceptable to do it while we’re handling them.

Because having leopard gecko poop on your hands is extremely unsanitary and also because it contains bacteria that could make you sick, it’s best to always thoroughly clean your hands not only after they’ve pooped on your hand, but after just handling them as well.

They’re clean pets to have, but they are constantly walking on a substrate that is soiled in pee and poop on a daily basis.  So when you handle them, all of that bacteria transfers over to your hands.  And it definitely doesn’t make matters any better when they poop on your hand either.

You might think to wear gloves to avoid having poop come in contact with your hand at all, but some gloves, especially latex, can have a natural smell to them that may cause your leopard gecko to be unable to recognize you because of the scent from them.

So for a better alternative, it’s a wiser idea to either just let them go on your hand and pick the poop up while you’re still holding them or placing them on top of a paper towel within your hand after you’ve picked them up out of the tank.  Either way though, you’ll have to wash your hands vigorously to completely make sure you’re getting all of the nasty bacteria off of them.

Before even washing them though, I recommend putting on hand sanitizer first as you could touch multiple different things within the house before even getting to the sink to wash.

It might seem pointless to sanitize your hands and then wash them after if you’re just going to wash them anyway, but there are so many things that can be touched just while in the process of even making it to the bathroom.

You could potentially touch your bedroom door, the bathroom door, and then finally the sink knobs before even getting your hands wet.  So that’s three things that would be infected with your leopard geckos fecal matter and urine from not sanitizing your hands just in the time that it took you to make it to the sink.

To avoid this, which you will definitely want to since leopard geckos can carry a bacteria called Salmonella, I recommend using hand sanitizer often.

As many of you are aware, hand sanitizer kills 99.99% of germs on your hand and if used right after handling your leopard gecko, you won’t have to worry about spreading their germs throughout the house and potentially getting others sick because your hands still had bacteria on them.

If you don’t know what leopard gecko poop is capable of carrying, then I suggest clicking here to check out the article I wrote on Salmonella and what it can do.  It’s a certain bacteria that can make you sick, but it can be prevented with the right sanitary measures. 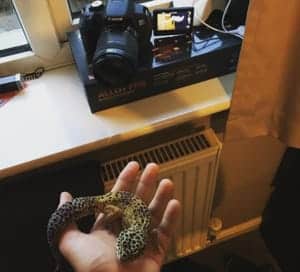 Unfortunately, as much as we dislike getting pooped on, we have to be consistent in training them not to do it.  It may not be something you want to repeatedly do over and over again, but if you stick with it, it’ll pay off in the long run.

Once you start the training process, you shouldn’t stop.  For example, if you’re training them and then stop training them for a month they might forget what they’ve been taught, so that’s why it’s important to stay consistent when doing it.

If you have to, set a schedule for when you’re going to pick them up and then set another reminder on your phone on those days to let you know that you need to train them.  Being consistent can be difficult, especially when you have other responsibilities going on in your life at the same time, so it’s always important to having something to remind you to make sure that your work with your gecko pays off.

If you don’t have a phone, maybe asking a friend or family member to remind you would be another good way to ensure that you’re not missing any training days.  Whichever way you’re reminded though doesn’t matter, just as long as you do it.

If you’re a responsible person, which thankfully it seems like most leopard geckos owners are, this part shouldn’t be very difficult for you.  But, even the most responsible people can be forgetful sometimes, so it never hurts to be reminded so that you’re being safer than sorry.

Consistency is absolutely key when it comes to training a leopard gecko to do almost anything, so as long as you’re able to stay on top of it, you’ll see the fruits of your labor pay off sooner than later.

However, if you’re not consistent, this behavior can go on for not only months but potentially even years as well.  It can be nasty work, but if you stick to it, don’t give in to your leopard geckos behavior, keep your hands nice and clean after the training is done, and practice patience, their behaviors should change within time.

The way you’ll know you’ve been successful with your training is when they stop pooping when you pick them up.

Thankfully, there’s nothing hard about training a leopard gecko to stop pooping on your hand when picked up, but, it can be a little disgusting to deal with when it happens every time that you do.  Because leopard geckos are fairly good at learning to stop bad behaviors though, they can be trained out of doing it with a little time and patience.

Since their poop contains germs and bacteria that can make you ill if it gets into your system, it’s best to sanitize and wash your hands after you’ve handled them so that that doesn’t happen.

It’s easy to be careless with where we put our hands after touching our pets, but when it comes to leopard geckos in particular, especially their feces, we’ll need to always to be mindful with where we put them not only for our own health but for other peoples health as well.

Certain people such as babies and the elderly have much weaker immune systems than people of different age groups, so although making sure your hands are clean after handling your leopard gecko should be a priority anyway, it’s especially important if you live around people who meet those age demographics.