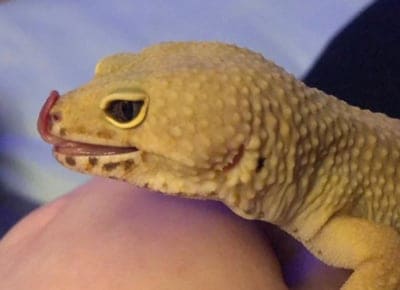 Leopard geckos have a lot of strange behaviors that might be hard to distinguish between what’s normal and what’s not, but thankfully, we have the internet where there are likely a ton of other people with different levels of experience who are going through the same things you are with your pet and can help you figure out what’s going on. So when it comes to this particular behavior in a leopard gecko, what could be the possible reasoning behind it?  Let’s look and find out.

Why do leopard geckos lick their nose? Unless there is some sort of scabbing, sore, or food on their mouth, a healthy leopard gecko will lick their nose for no other reason than to familiarize their self with a new surrounding or to just keep clean in general.

I can definitely see why this would be concerning if you’ve never owned a leopard gecko before, but in my experience and other people’s experiences, this type of behavior is completely normal and should be nothing to worry about unless you suspect that you’re gecko is, by chance, unhealthy.  If you feel that that this is the case, there are other, in fact, other reasons as to why they do this. 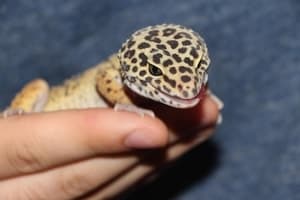 It’s totally normal for a leopard geckos to be licking its nose when you’re handling it or if it’s in a new environment, for example.  This is oddly a way for them to get used to an area or thing and is normal behavior to experience in all healthy geckos.

And I touched on this a bit above, but they’ll also lick whenever they have food on their mouth.  Leopard geckos are very clean reptiles by nature and like to do whatever they can to keep their area and their self clean, such as when they poop in one specific area in the tank, which I mentioned here in this article if you’re experiencing that as well, and even eating their own skin after a shed.

You might even find that they’re licking a small scab near their nose area from cricket bites if you’ve accidentally let too many in the tank at once, which they will usually, but not all the times, sort out their self depending on how bad the bite is.

Another normal reason for them to be licking their nose is when they shed.  Leopard geckos shed all over their body, so it’s not uncommon to see them licking the face area in an attempt to soften and peel some of that skin off.

If none of these potential reasons apply to your gecko, though, and you feel that there may be something else wrong, then there could be another reason for it that’s a little more serious.

When It’s Not Normal

If you think that your leopard gecko is licking a little too much to be considered normal anymore, then it may be suffering from a specific dental condition called mouth rot.  Now don’t worry, this condition is treatable, and your leopard gecko may not even have it.  But if they meet some of these following symptoms, then it could be possible that they do.

I talk about what causes stress in a leopard gecko a lot because there are a lot of different factors that can contribute to it, but I never knew exactly how serious it was until I read about this condition, which seems to be an indirect cause of stress itself.

When your gecko is in a constant state of stress, its immune system is severely compromised and is, therefore, prone to catching bacterial infections that much more.  This is why I can never “stress” enough how important it is that reptile owners take the time and steps that are required for their pet to live a happy and healthy stress-free life.

Due to the many potential stressors, it’s always good to educate yourself before getting your lizard so that you know exactly what and what not to do when you bring it home and so on.  If you think that your gecko has this specific condition, then the best thing to do from this point is cut out all stressors, make sure everything in their tank is set correctly, such as the temperature and space within their tank, and also make sure that they are getting the proper nutrition.

If it seems that your gecko is in a very bad state already and it’s unable to eat at all, it’s mouth is getting worse, or it’s showing new symptoms as time passes, then it’s time to call the vet.  The sooner you call, the better.  And if it’s caught in its early stages, then it can be treated. 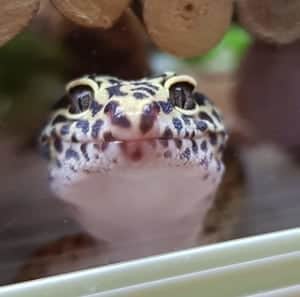 Leopard geckos will do anything to get the shed off their nose, and that includes rubbing it on hard surfaces such as the glass or the rough surface of a hide.  And when this happens, some licking can occur in attempts to keep it clean and soothe the pain.

If your gecko has just completed a shed and its nose looks red and is licking the tip of it excessively, then it’s probably time to treat it so that it doesn’t get any worse and also so your gecko will feel better.

In order to treat a scraped or sore nose, you should invest in some reptile wound and skin solution called Betadine.  This solution is made for animals in general and humans and is great for treating small cuts and scrapes that may have occurred from anything such as shedding, as stated above, or maybe even a cricket bite.

Keep in mind that after using the spray or liquid, you should keep an eye on your gecko.  They may keep trying to lick it off which at that point you’ll have to keep reapplying it.  So make sure your gecko is eating and drinking properly so that they can dilute any of the Betadine that is ingested.  If the scrape or sore is small, you shouldn’t have to apply it too many times.

I’ll usually buy the spray bottle version of it whenever I’m out and about running around, but when it comes to shopping for it online, I’ll pick up this brand.

If you really wanted to, you can just do what I do and buy a small spray bottle and pour the liquid in that for more convenience.

Make sure after buying it to read the back of the bottle for further instructions.

I hate to say this, but there are a lot of new reptile owners that just don’t have what it takes to properly take care of their pets.  I don’t say that to bash anyone, but I’ve seen it a lot, and it’s sad because these animals shouldn’t have to go through that.

If you don’t want to be an irresponsible owner, then it’s best to heavily educate yourself on your pet before buying one.  And I’m not saying I’m an expert, but I made sure to do my homework before buying my leopard gecko so that I wouldn’t put it in any type of danger due to mistakes that I could have potentially made.

In order to be responsible, you must take the time out every day to care for it and make sure it’s getting what it needs.  Here are a few examples of what responsible owners do:

I realize that some owners make mistakes, especially new ones, but keep in mind that some of these mistakes can cause irreversible damages and then all the time and money that you put into your gecko can be gone just like that.

If you notice that your leopard gecko is acting slightly funny, check on the internet to see what it is.  After that, take the necessary steps to treat your gecko if there is something wrong.  If that doesn’t work, then it’s time to go to the vet.  It’s not that hard at all to care for geckos, you just have to make sure you’re well-educated before doing so so that you don’t lose them due to a small mistake.

Reptiles are not like humans when it comes to certain behaviors and don’t always have a solid reason as to why they do what they do, but if you do happen to see your gecko licking its nose and you know for a fact that they are healthy, then there’s nothing to worry about.

If this licking is associated with other really odd behaviors or it’s doing it excessively, then it’s time to look to see if there is something more going on with it.  it’s easy to ignore certain behaviors or assume that your pet will start acting normal again after a few days, but this behavior could be almost anything and should be looked at as a serious issue just in case it actually is one.

With the right amount of responsibility, your gecko will live a long and healthy life with no major issues that you or they will ever have to deal with.  So if you care for them properly and give them what they need on a daily basis, then something as serious as a bad illness or disease is not something that is ever likely to happen.