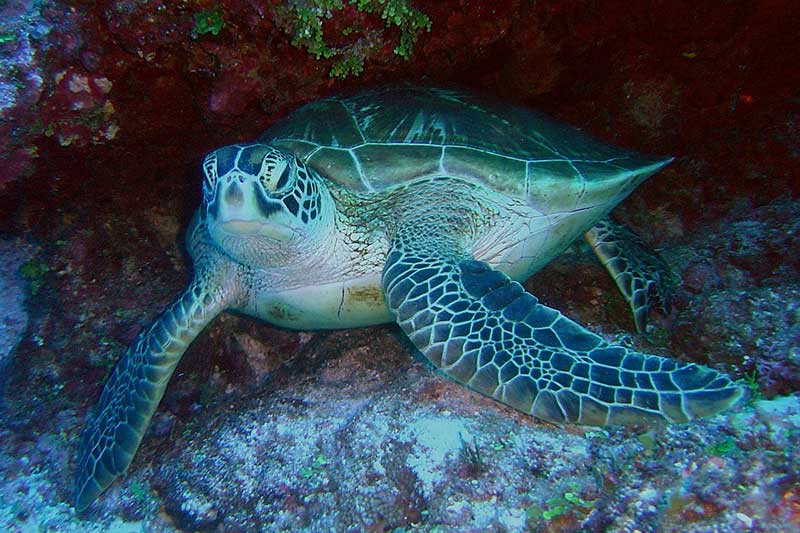 Florida is paradise for nature-lovers. There are alligators, snakes, and other reptiles throughout the state. The Everglades offer a tropical climate for wildlife that can survive no where else in the country. Many would argue that the sea turtles found along Florida’s coasts are the most interesting reptiles the state has to offer. The state of Florida has many different types of turtles including fresh water turtles and a few species of box turtles, but in this article we’ll be talking about the sea turtles in Florida.

Florida’s coastlines are famous for their world class fishing and shark watching, but they’re also home to no less than 5 different species of sea turtles. Sea turtles were once so common here that Florida was the heart of a massive turtle harvesting industry that sought their meat and shells for commercial purposes.

None of that is happening here now, of course. But it’s still a great place to come and see sea turtles in the wild. Here’s everything you need to know about the different species of sea turtles in Florida.

The 5 sea turtles in Florida

These turtles nest in over 80 countries, and in the United States they nest in both Texas and Florida, and the juveniles tend to stick around the nearshore waters there. Unlike other sea turtles, the green sea turtle is an herbivore, it eats mainly algae and marine plants. This, in fact, is part of how it got its name. The turtles shell and skin are brown, but because of it’s all-plant diet, it’s fat is green. Sea turtles were once hunted extensively for their meat, which is a major reason why they’re still considered threatened (endangered in Florida).

Turtle hunting and canning was once a huge industry, and turtle soup was a sought-after delicacy. Florida was one of the epicenters of the turtle hunting industry and it’s population of green sea turtles hasn’t fully recovered from overhunting.

Hawksbill sea turtles are distinguished by their beautiful shells, for which they were historically harvested. The shells were used to make jewelry, combs, and other items. These turtles typically don’t nest in Florida, although a few nests have been spotted in recent years in the Keys and even near Cape Canaveral.

Hawksbills are tropical turtles, and they like warm water and coral reefs. In Florida, most of them are found in the Keys, where they’re spotted quite often by divers and snorkelers. They hang around reefs and jetties where they can easily find their favorite food… sponges. They’ll wedge themselves into the rocks to sleep when they need rest. They can also be found throughout the Caribbean, along the tropical coasts of Africa and in the Indian ocean.

The largest of all sea turtles, the Leatherback is truly a gentle giant. These 2,000 pound turtles prefer to inhabit deep water where they gorge themselves on jellyfish. They eat virtually nothing else, which makes them one of the jellyfish’s prime predators and one of the biggest factors in jellyfish population control.

Leatherbacks live throughout the world’s oceans, as far north as Alaska. Somewhere between 30 and 60 leatherback turtles next in Florida each year, and the adults can be found in the state’s water year round.

These enormous turtles are named for their unique carapace, instead of a solid shell, that have a softer, leathery back made up of many small, interlinking bones. It’s believed that this softer, more flexible shell evolved to help them withstand pressure at great depths, they’ve been recorded diving to over 4,000 feet, so they need all the help they can get.

The smallest and most critically endangered of the sea turtles, Kemp’s ridleys are more common in Texas than anywhere else in the United States. About 55 adult females nest in Texas each year, almost all of them on the Padre Island National Seashore. In fact, there’s a large breeding program there to help boost the species’ population, and several times each summer there are public releases of Kemp’s ridley hatchlings.

While they aren’t known to nest in Florida, adult Kemp’s ridley turtles do live in Florida’s coastal waters. Because they’re so highly endangered, they’re a rare find out in the wild. If you see one, be sure to take a picture!

Out at sea, adult Kemp’s ridley turtle feast on crabs and other mollusks, while occasionally eating jellyfish. The males will never return to shore, they live their entire lives in the open ocean. The females will return to the same beach each year to lay their eggs. Most of them nest on just one beach in Mexico, and Texas is at the northern end of their range. 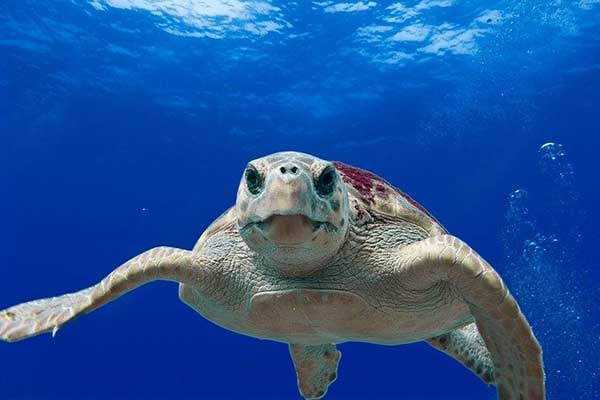 If you’ve ever wondered what would happen if you crossed a snapping turtle and a sea turtle, here’s you answer. Loggerheads have massive, muscular heads and sharp, tough beaks. They mostly eat mollusks like crabs, oysters, lobsters, and clams. These are the most common sea turtles in Florida, so if you see a turtle on your next fishing trip, odds are it’s a loggerhead.

As much as 90% of all the loggerheads in US waters nest in Florida, which makes our state one of the most important places in the world for the survival of this species.

Like other sea turtles, loggerheads like to eat jellyfish frequently. Scientists don’t believe that sea turtles are immune to the stings of these creatures, but that for them, it’s actually a lot like eating a hot pepper is for us. So, they may seek out the sting intentionally!