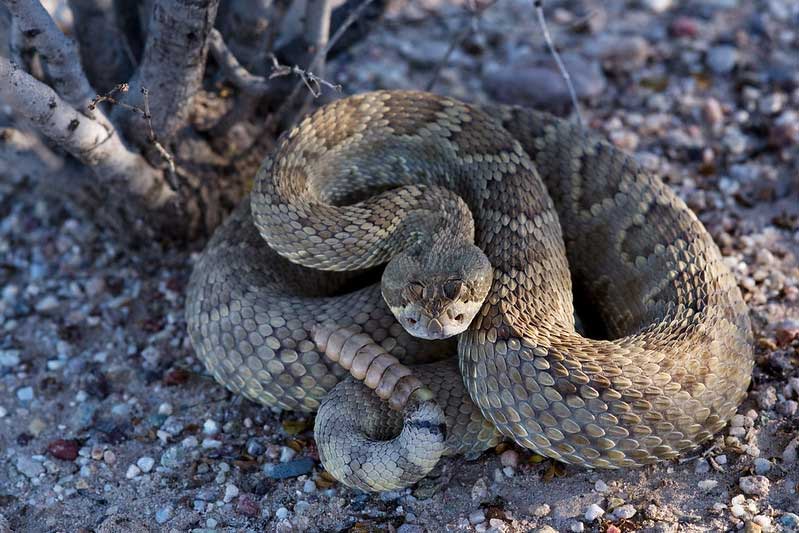 Rattlesnakes are among the most common venomous snakes in the Americas. The fear of these reptiles means that people will often assume any snake they see is a rattlesnake, no matter what it looks like. In this article we’re going to look at 8 snakes that look like rattlesnakes, or are commonly mistaken for them.

Some snake species really do resemble rattlesnakes in color, body shape, and even behavior. Knowing which species are merely rattlesnake look-alikes and otherwise harmless, can really put your mind at ease when you see a snake in the wild.

Remember though, it’s always a bad idea to try and handle a wild snake, or to even approach one. No matter how confident you are in your snake identification skills, there’s a chance that you’re wrong, and that’s a risk you really don’t want to take.

The following 8 types of snakes often get mistaken for rattlesnakes in North America. In reality they’re non-venomous and harmless to humans.

Reaching eight feet in length when fully grown, bull snakes are some of the largest snakes in North America. They’re non-venomous, and can be found throughout all of the United States, as well as parts of Canada and Mexico. They eat lots of small mammals, especially rodents, which means they’re very beneficial to have around.

Bull snakes look almost identical to rattlesnakes at a glance. Like many of the most common rattlesnake species, bull snakes have a tan or brown coloration with darker brown splotches on their back.

However, they aren’t nearly as thick or heavy as a rattlesnake, with much narrower bodies. They also don’t have the distinctive triangular heads of venomous snakes, and, of course, they have no rattle.

Found throughout the midwest and the southeast, the prairie kingsnake is a very common species of nonvenomous snake. With a light brown or Grey color and reddish brown blotches on the back, they definitely look a lot like small rattlesnakes. However, their heads are small and narrow, and they have no rattle.

Ironically, the prairie kingsnake is resistant to rattlesnake venom, and is actually known to eat rattlesnakes. They’re commonly mistaken for rattlesnakes, both because of their appearance and because of they’re habit of shaking their tail against the leaf litter, creating a rattling sound, when they feel threatened.

These snakes commonly reach four to five feet in length, which means they’re similar in size to the western diamondback rattlesnakes they share their range with. They also have similar colors and patterns, with light brown to tan color interrupted by darker brown blotches on their backs.

T​hey even eat the same prey- targeting mainly rodents, birds, and lizards- which means they’re found in the same habitats. Rat snakes are voracious eaters, feeding a lot more often than most snakes. They’re drawn to agricultural sites where there are large numbers of mice and rats. They are also excellent climbers and will frequently hunt birds high up in trees.

Named for their upturned snouts, which help them burrow through the dirt, hognose snakes have hugely varying coloration depending on where they live. Some are all black, others have light brown with dark brown stripes, and more. These colors, combined with their relatively stout bodies, make them very similar in appearance to rattlesnakes, cottonmouths, and copperheads.

T​he hognose snake is usually listed as nonvenomous, but this isn’t quite true. They have fangs at the back of their mouth, and they do produce venom. However, the location of these fangs makes it extremely difficult for them to use their venom in self defense. Even if they did, their venom is only harmful to amphibians, which are their main prey. They are harmless to humans.

Closely related to the bull snake, the pine snake has many of the same features which make them similar in appearance to rattlesnakes. When it feels threatened it has a habit of rattling its tail agains the leaf litter, which makes it sound like a rattlesnake.

These are one of the only snakes known to make multiple kills at the same time. When entering a burrow of mice, it will often use it’s body to crush multiple mice against the walls of the burrow, allowing it to eat them at it’s leisure.

Although it’s most commonly confused for a cottonmouth, the diamondback water snake also has an undeniable resemblance to the diamondback rattlesnake. It has an unusually large head for a nonvenomous snake, which adds to the confusion.

I​n addition, these snakes are often aggressive when threatened, which leads to the assumption that they’re venomous. They live in and near the water, where they feed almost exclusively on fish.

Corn snakes, sometimes called red rat snakes, have striking orange and red coloring that makes them very similar in superficial appearance to copperheads. However, their large sides and pattern of blotches on the back can also make them similar to rattlesnakes.

Probably only second to the ball python, corn snakes are one of the most popular snake species in the pet trade. This is a result of their size and their docile temperament. Corn snakes will tolerate being handled for extended periods, and even wild individuals will become docile over time if they’re kept in captivity.

G​ray coloration with dark brown splotches on the back makes gray rat snakes look remarkably similar to the timber rattlesnake, as well as other species. Since they inhabit the same areas, this can easily cause confusion when identifying snakes in the field.

You’ll often find them high in the trees, hunting birds. They’re agile climbers and that means you can find them just as commonly in trees as on the ground. They’re also very common in agricultural sites, drawn there by the huge rodent population.