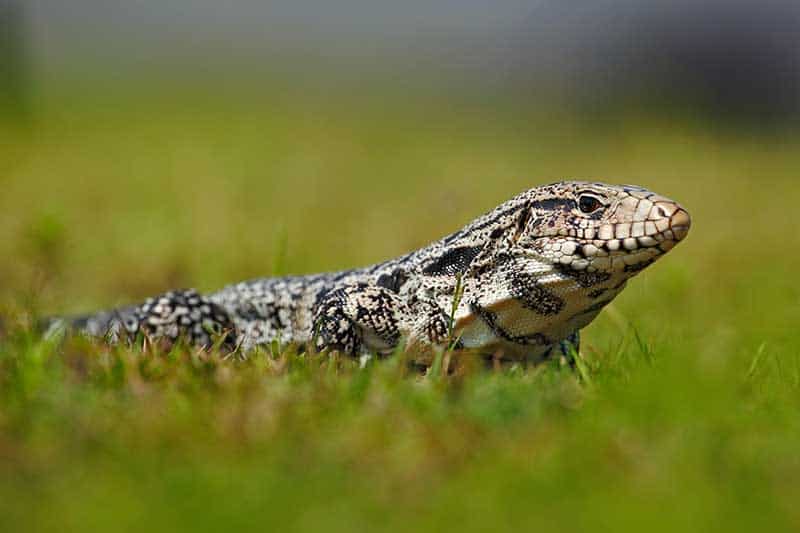 If you are at all interested in reptiles, lizards in particular, then you’ve probable heard of the tegu lizard. They are large and rather calm, which really does make them great pet reptiles. However, they do get big and many times new owners aren’t prepared for this, so they simply let them go. As in, drop them off outside somewhere. In this article we’re talking specifically about the tegus in Florida, because so many people have done this very thing that it’s becoming a problem.

Tegus in Florida – what is a tegu?

Here are some quick facts about tegus:

How tegus got to Florida

Tegus got into Florida the same way most other invasive reptiles make their way into the United States, by way of the exotic pet trade. People purchase these large lizards because they seemed like cool pet lizards at the time. Then they grew and grew until they didn’t want to take care of them anymore, so they let them go.

Now tegus are thriving and breeding in Florida’s warm climate. Scientists and researchers are worried that tegus have the potential to continue reproducing and growing and threatening native wildlife.

Problems tegus cause in Florida

Tegus can potentially affect the population of native wildlife species by feeding on their eggs or the animals themselves. Tegus feed on a wide range of invertebrates and small vertebrates as well as eggs, insects, spiders, and snails. However they are omnivorous and also eat berries, fruits, nuts, and have even been known to eat pet food left outside. So it’s highly recommended if you live in Florida not to leave pet food out.

Because tegus have a seemingly high tolerance to cold weather and are able to brumate, their population is moving north. Tegus have been seen as far north as Jacksonville in Florida, but also into Southeast Georgia.

How many tegus live in Florida?

It’s unclear at this time exactly how many tegus live in the state of Florida, but they hey been confirmed as living in the wild in multiple counties across the state. However, they are concentrated mostly in southern Florida in Miami-Dade, Hillsborough, and Charlotte counties.

What to do if you see a tegu lizard in Florida

First, do not approach the animal. If you’re at your home then bring all pets inside as well as any food that might attract the animal or keep it around. Tegus are generally not aggressive animals, but they have powerful jaws and if threatened they will use them in self defense.

If you have an unwanted pet tegu then we suggest you utilize FWC’s Exotic Pet Amnesty Program.

If you live in Florida and need to report a tegu sighting, visit this website for a few different options.

Unfortunately there is a growing population of Argentine black and white tegus in the state Florida. It’s due to irresponsible pet owners not being prepared to care for a large reptile like the tegu, and simply letting them go into the wild where they reproduced.

There have been sightings of a couple of other types of tegus, like the red tegu and the gold tegu, but they aren’t as commonly seen. The tegu problem in Florida is likely to only worsen as the populations grow and move north in North Florida and even other southern states.