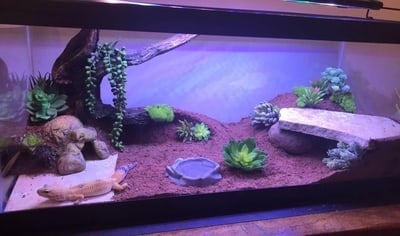 Whether you’re using a lamp or a mat, leopard geckos absolutely need heat in order to survive.  The reason it’s so important for them to have is because it serves multiple different roles in maintaining their health and wellbeing and it also helps imitate what it would feel like if they were still in their natural habitat as well.  That said, let’s see if having it on at night is needed.

Because leopard geckos don’t produce their own body heat, they heavily rely on other sources of it so that their bodies can function the way that they’re supposed to in order to survive.  Without their heat mat, they can experience a host of different issues in which some of them might even be hard for them to recover from.  To give you a better idea of what I’m talking about, read on. 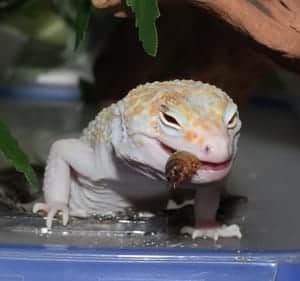 For those who don’t know, leopard geckos are cold-blooded lizards and because of that, they need outside sources of heat in order to give them what’s needed to safely digest the bugs that they eat.

Without this heat, they may have trouble chewing, swallowing, or even passing their food once it’s time for them to perform a bowel movement.  Not only will the inability to eat properly stress them out, but it also might cause them health issues or a complete loss of appetite as well.

If it does happen, passing food might prove to be difficult for them and because of that, they may even lose their lives.  The reason this tragedy may occur is because not only does harmful bacteria from all of the fecal matter get trapped in their body, but the buildup of it can cause their insides to potentially rupture from being overly expanded.

When they have their heat mats on, this isn’t something that is likely to occur as everything in their bodies will be running smoothly and because of that, they’ll be able to pass their stool more easily.

Leopard geckos are aware that not having heat while they eat is detrimental to their wellbeing so if it’s not available, again, they’ll likely just not eat altogether until a source of heat is provided to them.

For the leopard geckos who eat despite the lack of heat due to extreme hunger, they may fall victim to potentially becoming impacted.  Leopard geckos should have heat provided to them at all hours throughout the day, but if I had to pick a time where heat is most important for them, then it’s definitely at night when they’re up, active, and ready to eat.

Not only does their heat help them digest their food, but it also helps with their breathing as well.  Because they are cold-blooded creatures, not having heat affects every single part of their body.  And because temperatures generally drop at night, especially in the winter, not having their heat mat on may cause a huge strain on how well they’re able to expand their lungs.

If you’ve ever had a really bad cold before, then you may be able to understand a little bit about what leopard geckos go through whenever they’re unable to fully take in a breath because of strained breathing.  As a result of not being able to do so, not only will they not be able to eat right, but they also might not be able to even drink right as well.

If you can imagine what it feels like to breathe in through a straw for a long period of time, then that is how your leopard gecko would feel for hours at a time without their heat but instead, much worse.

If a respiratory infection is contracted from going too long without heat, their heat mats will need to be turned back on immediately and you will need to get your leopard gecko professional attention as soon as possible so that it can be treated.

According to PetMD, treatment will include antibiotics given orally, through injection, or potentially even through inhalation.  And although treatments are available, it’s best that we’re not allowing this to happen to our leopard geckos at all in the first place.

Yes, their heat mats are great for keeping them warm throughout all hours of the night whenever outside temperatures are a little bit lower than usual, but they’re also great for giving their bodies what they need in order to perform basic tasks needed for their survival as well.

Without it, we now know that they’ll be unable to eat, breathe, and because of that, maybe even survive as well.  Heat plays a very important role in a leopard geckos life and for that reason, it’s absolutely essential for them to have in order to ensure that they’re staying alive.

Their Behavior May Change 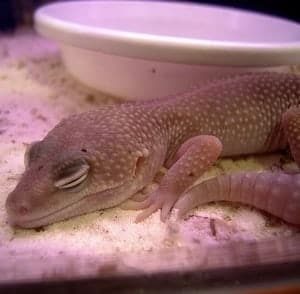 As I stated above, a lack of heat affects every single part of their body.  It not only prevents them from doing the things that I spoke about above, but it also might cause them to start behaving very differently as well.

Leopard geckos are generally very active, adventurous, and curious creatures whenever they’re up and active, but without that much-needed heat, they may actually start behaving in a completely opposite way.

This behavior might include sluggishness, fatigue, and overall just pure inactiveness.  Leopard geckos aren’t the most energetic lizards in the world, but this type of behavior is very unusual for them to experience.

It’s something that is very likely that they will go through if you turn your heat mat off and it’s also definitely not something that they enjoy experiencing.  Any time a leopard gecko starts behaving this way they’re either pregnant, about to shed, ill, or of course, they don’t have enough heat in their bodies.

If you catch your leopard gecko behaving like this before you go to bed after you’ve turned their heat mat off, then turn it back on immediately as the lack of heat is almost guaranteed to be the cause for why they’re acting like that.

Keep in mind that leopard geckos don’t act this way for no reason, so again, if you do spot it, don’t ignore them.  Owners commonly make the mistake of ignoring certain signs and symptoms that leopard geckos show that let them know that something is wrong and as a result, a lot of owners lose their leopard geckos as well.

In addition to the signs that I mentioned above, a disinterest in food and difficulty breathing are also signs that something serious is going on with them.  With so many signs that are displayed when they don’t have enough heat in their tanks, it’s actually kind of hard to miss that something is, in fact, up with them.

Hopefully, you don’t have to experience your leopard gecko go through any of these things or also bear witness to any of these odd behaviors, but if you do happen to accidentally turn your heat mat off at night and you’re not sure whether you’ve made the right decision or not due to the signs that your leopard gecko is displaying, then turn it back on immediately.

Leopard geckos have adapted to needing heat in order to do many things in their life, and without it, you can see how harmful it can be to their overall health and wellbeing.

There are many mistakes that can be made as a leopard gecko owner but when it comes to turning their heat off altogether, that is one thing that is absolutely important that you don’t do.  Living without heat is literally impossible for them and even though they may be able to endure it for a short amount of time, it will eventually take a toll on their bodies if they’ve gone long enough without having it.

Us humans are warm-blooded creatures so we have no idea what leopard geckos go through whenever they don’t have heat, but with the information in this article, hopefully it gives you a better idea of how important it really is for certain creatures, such as the leopard gecko, that aren’t.

Unless you’re cleaning out their tank and temporarily relocating them into another tank that doesn’t have heat, then it’s important that they’re exposed to it 24 hours out of the day and 365 days out of the year.

It’s crazy to believe that not having heat can have such an effect on their bodies, but because they’re cold-blooded creatures who are naturally from an environment that’s pretty hot year-round, it’s something that they’ve adapted to need even while in captivity.