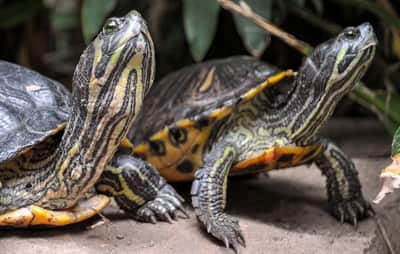 If you have a turtle and a tortoise, it may seem like they’d make great friends if they lived together. And since they require similar temperatures, are there really any issues with housing these two animals in the same environment?

So can a turtle and a tortoise live together? It’s not recommended to house a turtle and tortoise together; they require different environments, may show aggression towards each other, and can pass dangerous illnesses to each other.

Is It Safe for a Turtle and Tortoise to Live Together?

Unfortunately, it’s not a good idea to house your turtle and tortoise together for a few different reasons. While it may seem like the two would make good companions, they don’t have any type of relationship in the wild, so it’s unnatural to put them together. There’s a risk of stress, injury, and illness when you put a turtle and a tortoise in the same environment. 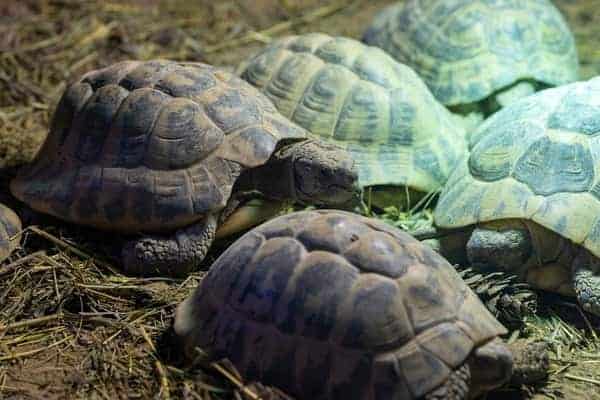 Turtles are aquatic creatures, while tortoises are terrestrial. While turtles can walk around on land just fine and often do so to bask, many tortoises are simply not equipped to swim.

That’s not to say that no tortoises can swim–some species are able to. But many common types of tortoises that are kept as pets simply don’t have the capability to do so. There’s actually a big risk of drowning when turtles and tortoises cohabitate for this reason.

Additionally, modifying the area where your turtle swims so that it’s not deep enough for your tortoise to drown isn’t a good idea. While it will protect your tortoise, it will also adversely affect the turtle because the depth won’t be sufficient for its needs.

While turtles and tortoises need exposure to the same range of temperatures and both require access to UVB rays, they just aren’t meant to live together because their overall environmental needs as far as land and water differ.

Tortoises are typically best suited for the environment of a tortoise table, while turtles need an aquarium that also contains a dry dock or basking area.

The Turtle and Tortoise May Act Aggressively Toward Each Other

This is especially true if both are males. Typically, whichever animal is smallest will be forced into submission, while the other will assert its dominance. This can lead to problems with feeding, possible injury to your pets, and a constant state of low-grade stress for both animals.

Stress is a big deal, even if it may not seem like it; it can lead to many different types of illness that can then become life-threatening.

Turtles and Tortoises Can Pass Dangerous Illnesses to Each Other

Because turtles and tortoises don’t often come into contact in the wild, they haven’t built up any immunities to the bacteria the other transmits. This means there’s a chance that one of your pets could infect the other (or in a worst case scenario, they could both infect each other).

The risk of illness alone is enough for reptile owners to recommend that turtles and tortoises never cohabitate.

Being housed together means that the two animals would be exposed to the other’s waste, which can contain a host of harmful bacteria. The water bowl and food that’s left over after mealtime are other big ways that illnesses can be passed between your turtle and tortoise. 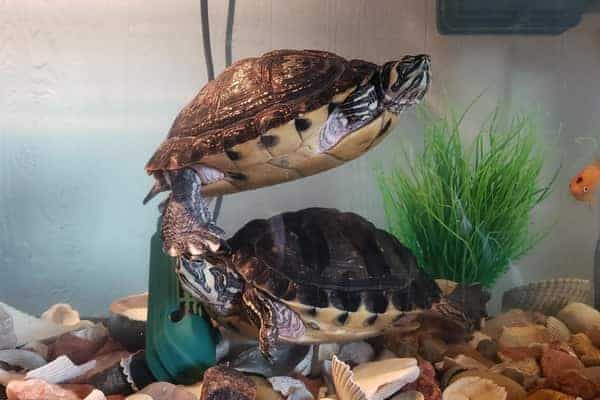 Can Multiple Turtles Live Together?

For example, you could put a more terrestrial turtle like a painted turtle or slider turtle with an aquatic turtle such as a musk or mud turtle.

This is a great way to maximize your vivarium’s square footage and give both animals the space they need to not feel stressed or threatened by the other turtle. Remember that a single turtle needs at least a 50 gallon tank, so two turtles would need a tank of at least 100 gallons, and so on.

There are a few more aggressive species that need to be housed alone, such as snapping turtles and softshell turtles. They tend to see any other animals in their habitats as prey, so your other turtles simply won’t be safe living with them.

Additionally, hatchlings generally shouldn’t be housed with full-grown turtles, who may attack and even eat them. Once a hatchling reaches about four inches in length, they should be able to cohabitate with older turtles without the fear of becoming their next meal.

It’s very important to provide a big enough enclosure for all of the turtles to live happily without having to compete over resources such as hides, basking areas, food, water, and space in general.

Having to compete for these necessities will cause a lot of undue stress, which can lead to illness–and since you have multiple turtles living together, that illness is likely to spread to all of them very quickly.

Can Multiple Tortoises Live Together?

While it’s possible for more than one tortoise to live together, it’s not really encouraged. This is because tortoises are naturally solitary creatures from a very young age. Although we as their owners might think that they’d get lonely or crave companionship, that’s just not how tortoises are wired.

But if you do want to house multiple tortoises in the same enclosure, there are a few important things to keep in mind.

First, the tortoises need to be from the same species. This is because each species carries different types of bacteria that can be dangerous to other species. In addition, don’t house two males together. They have a tendency to be aggressive towards each other and try to prove their dominance.

You also don’t want to put one male and one female together, because the male may constantly try to mate, putting a lot of stress on the female. However, it’s usually fine if you put one male and two or more females together.

In addition, make sure to avoid putting two tortoises with a large size difference together, because the larger one will immediately assert its dominance, causing stress and sometimes even injury or reduced access to food for the smaller tortoise.

Finally, it’s essential to have a large enough environment for your tortoises with plenty of space to bask in and multiple hides. Each tortoise needs to have 12 to 24 square feet of space at the very least. It’s also important to have a good heating and UVB system that you can monitor regularly. 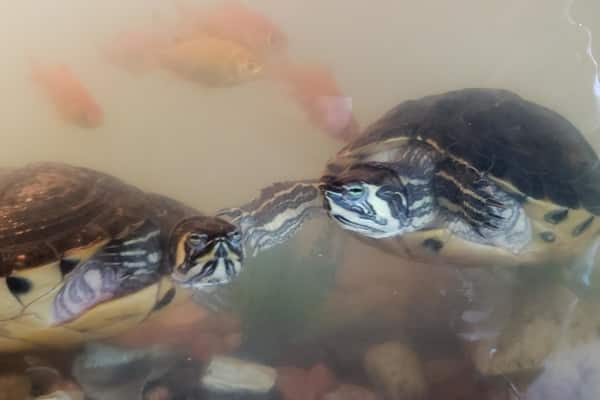 The Ideal Environment for Turtles

UVB light is also necessary for turtles to thrive and stay healthy. The UVB rays help turtles to process calcium, which affects their bone and shell health.

The Ideal Environment for Tortoises

Tortoises also need UVB light, which helps them to absorb calcium and Vitamin D. Without UVB light, their shell will soften and they’ll have developmental issues which can worsen into life-threatening illness. Fresh, clean water should be available to your tortoise at all times, and it will also need a weekly soak in fresh water for hydration and to aid in digestion.

It’s definitely not recommended for turtles and tortoises to cohabitate. This is because they have different environmental needs, can show aggression towards each other that may lead to stress and injury, and are capable of spreading dangerous diseases to each other.

While different species of turtle can live together successfully, the same cannot be said of tortoises.

Both turtles and tortoises require a warm basking area with a lower ambient temperature throughout the environment as a whole. They also need to soak in UVB rays on a daily basis to stay healthy.