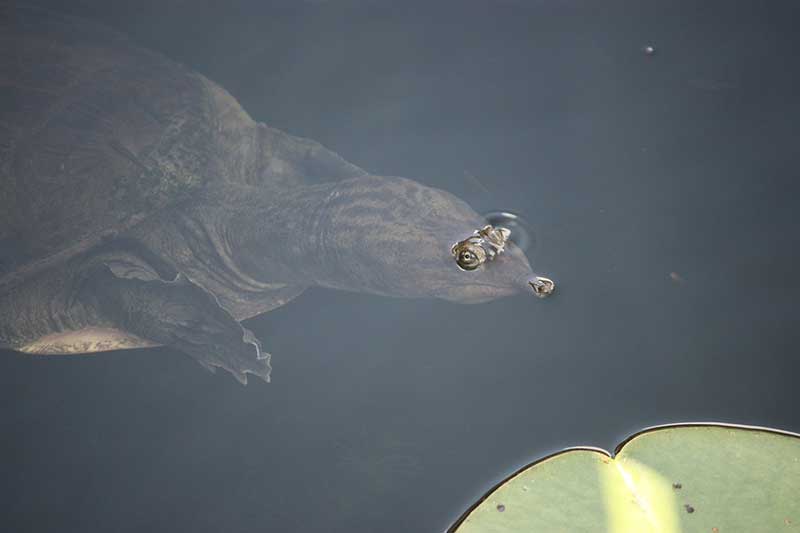 While most turtles have hard shells to protect them, there are some turtles with soft shells. A softshell turtles’ upper shell, also known as the carapace, is covered with skin instead of a hard plate. As a defensive mechanism, these turtles tend to grow large in size, have strong rib cages, and can swim away from predators easily. In fact, their biggest threat is from humans, not natural predators.

Their meat is considered one of the tastiest wild game and people often hunt them to make turtle soup. However, if you don’t eat them and observe them in the wild instead, you’ll find they are fascinating ambush predators with a fast strike. They also have very interesting appearances.

To learn more about these amazing species of turtle, here is information on the 9 softshell turtles in the United States.

The Florida softshell turtle is found throughout Florida and extends to southeastern South Carolina and southern Georgia. They are the species of softshell turtle most likely to live in lakes but can also be found in canals, streams, and roadside ditches.

This species is the bulkiest softshell turtle and is brownish-gray to dark brown with dark spots. Females will grow double the size of males, at 11 to 24 inches in size. Males typically are 6 to 12 inches. They mostly eat fish or snails and sometimes eat waterfowl such as small herons and ducks.

This species is one of two softshell turtles and both are very similar in appearance. Their main difference is their habitat and range. The Midland prefers standing water in riverine and stream systems, including the Tennessee Valley creeks. You can find them in ponds and lakes with sandy or muddy substrate areas.

Both smooth softshell turtles are the most aquatic turtle species in North American. The Midland species has a moderate conservation concern in the United States.

The Gulf Coast smooth softshell turtle can be found in flowing water from the Florida panhandle to Louisiana. They typically live in the Alabama, Pearl, and Escambia river systems in the western part of the Coastal Plain.

This species has a similar coloring to the Midland species, including the carapace markings. Their snout is also similarly tubular with round nostrils. Females can have a carapace from 6.5 to 14 inches long and males 4.5 to 10.5 inches long.

They hunt by ambushing their prey with their long necks while lying concealed in sandy or muddy substrate. Males prefer hunting by the shore, while females typically prefer deeper waters.

The Gulf Coast spiny soft shell turtle is an olive-gray to tan with darker brown markings and small black spots on their carapace. They also have three lines following the edge of their carapace. Males can grow up to 10 inches in diameter, while females are larger growing up to 18 inches.

You can find these turtles along the Gulf Coast from northern North Carolina to eastern Louisiana. They typically live in wetlands such as streams, ponds, rivers, and large reservoirs. These turtles protect themselves from predators by pulling their heads and legs completely into their shells.

The Eastern spiny soft shell turtle has a distinctive pointy snout and bumpy projections on the front edge of their carapace called tubercles. The carapace surface is also rough like sandpaper with dark markings. Females are significantly larger than males growing up to 21 inches in shell length, while males reach around 8 inches.

These turtles range from western New York to Wisconsin down to the Tennessee River. They mostly eat mollusks, crayfish, earthworms, minnows, frogs, and tadpoles. In some states, such as Vermont, these turtles are designated as a high priority Species of Greatest Conservation Need.

There’s a large population of these turtles in Montana’s Missouri River drainage. You can also find them from Minnesota to Arkansas and southeast Wyoming, eastern Colorado, and northeastern New Mexico. These turtles breathe underwater through their skin and spend most of their time in the water to avoid predators, such as raccoons and birds.

You can find the  Guadalupe spiny soft shell turtle only in Texas in the Nueces and Guadalupe, Colorado, Nueces, Lavaca, and San Antonio rivers. They are powerful swimmers and typically stay near the water, including basking in the sun.

These turtles have large white spots on their shell, with adults also having black rings. Their tubercle is round, flat, and wart-like. Tubercles are distinctive spine-like projections along the edge of their carapace, giving all spiny soft shell turtles their name. The female carapace grows around 13.8 inches long and males 17.3 inches.

The Texas spiny soft shell turtle is olive to light brown with tiny white spots without black rings around them. Their spots are also only on the back third of their carapace. These turtles have rounded but less prominent tubercles compared to other spiny soft shell species.

This turtle is native to Texas and New Mexico and can typically be found in the Rio Grande and the immediate tributaries. These species have also been introduced to the extreme south of California, even though they aren’t native to the state.

The Pallid spiny soft shell turtle has a similar coloring to other spiny species but has tiny white spots and cone-like tubercles. The turbercles gradually get smaller towards the back of the carapace and nearly don’t exist in the back third. Females carapaces are typically 7 to 19 inches long and males are only 5 to 10 inches.

You can find these turtles in the south-central range of southern Oklahoma, Arkansas, northeastern Texas, and most of Louisiana. They typically live in the Red River drainage and rivers draining into the Gulf of Mexico east of the Brazos River.