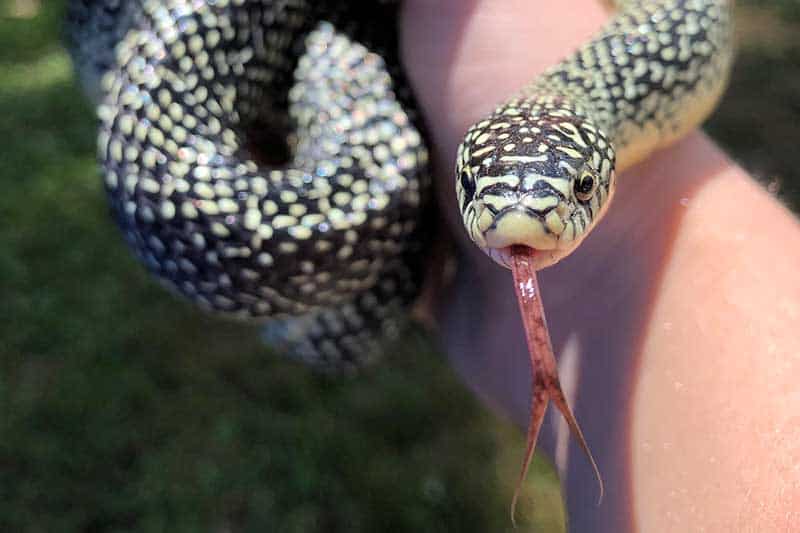 There are a total of around 50 different species of snakes found in the United States. Missouri, like most other states in America, is home to many of these types of snakes. In this article though, we’ll be looking at the types of kingsnakes in Missouri.

All kingsnakes are non-venomous constrictors that feed primarily on other snakes, even venomous ones. Kingsnakes are considered to be snake-eaters, which is how they got their name. Different species grow to different sizes and have very different markings. Some are solid black like the Mexican black kingsnake, while some are very colorful like the scarlet kingsnake.

In this article, we’ll learn about the 6 species of kingsnakes and milksnakes found in the state of Missouri. Since milk snakes fall under the kingsnake Genus, they’ll be included on this list.

6 types of kingsnakes in Missouri

The prairie kingsnake, also known as the yellow-bellied kingsnake, are found throughout the state of Missouri. They can grow up to 4 and a half feet in total length. This elusive snake is usually tan to brownish gray, with brown or rusty blotches down the back. The belly is a cream or yellow color with brown blotches. The young are vibrantly spotted, which fades over time.

Their mating season is in early spring, after coming out of their winter dormancy. 6 to 18 eggs are laid, but won’t hatch until August or September. They typically hunt during the day, but during the peak of summer, they actually become more nocturnal. The prairie kingsnake eats mice and other small mammals, but they have also been known to eat lizards, smaller snakes, amphibians, small birds, and sometimes insects. They’re often found in fields, prairies, woodlots, and rocky hillsides.

Kingsnakes are not considered dangerous, but are routinely killed by people who mistake them for copperheads or other venomous snakes.

Milksnakes get their name from an old folk tale that describes a snake sneaking into a barn and drinking the milk from nursing cows. The eastern milksnake is fairly widespread in Missouri. They have smooth shiny scales with black-bordered brown-red markings on a tan or whitish-gray background. The newly-hatched look identical to the fully-grown adults, though are much brighter.

Milksnakes are sometimes referred to as coral-pretenders, meaning that they greatly resemble highly venomous coral snakes.

Black kingsnakes mate in the spring and lay 3-24 eggs which hatch in early August or September. They eat other snakes, lizards, rodents, birds, and turtle eggs. Like other kingsnakes, they are resistant to the venom of pit-vipers. This allows them to kill and eat rattlesnakes, copperheads, and cottonmouths with no ill effects.

The black kingsnake has a rare morph called the black speckled kingsnake. Its black and white scales give it a unique salt-and-pepper look.

The red milksnake is found statewide in Missouri, their range extends west through several other states. Red milksnakes can reach about 3 feet in length as adults. They can be identified by their dominant red bands that are outlined with black borders, separated by tan or pale bands.