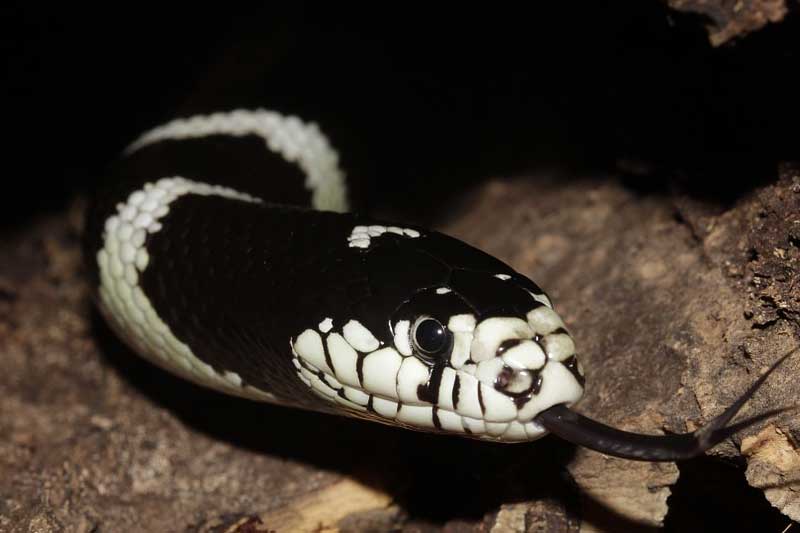 Snakes are a reptile many people either love or hate. They are feared by some, and adored by others. Some snakes are venomous, but some people are simply put off by their scales and the way the slither. Either way, snakes are actually very beautiful and mostly docile creatures with unique personalities. This is especially true for the kingsnake. The kingsnake is a medium-sized non-venomous snake that earned its name due to the fact that it kills and eats other snakes. In this article, we’ll look at 16 types of kingsnakes and learn about some of the subspecies as well.

Kingsnakes are members of the family Colubridae and the subfamily Colubrinae. The Genus Lampropeltis, aka kingsnakes, translates to “shiny shields”in Greek, which is an accurate description for this beautiful snake.

Let’s learn more about 16 of the different types of kingsnakes.

The Common kingsnake is anything but common. This snake has many various colors, including vibrant reds, yellows, oranges, tans, black and white, which come in many different patterns and shapes, all depending on the subspecies of the snake. They are found primarily in the United States and in Mexico, typically in grasslands or deserts.

The Common kingsnake is usually between 2 and 4 feet and hunts by suffocating their prey, which they are not picky about. It is actually able to efficiently break down the enzymes from poisonous snakes and even eat venomous snakes and creatures! 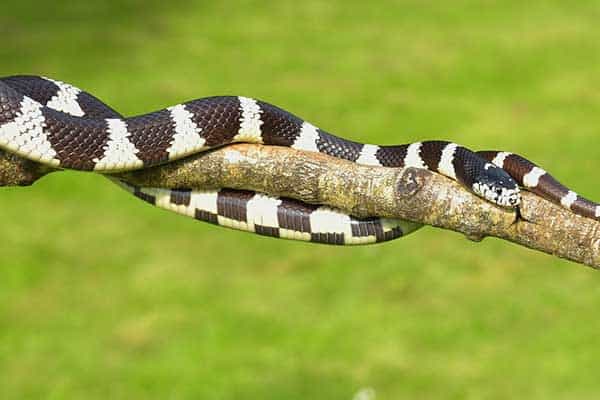 The California kingsnake varies greatly in appearance, just like their parent snake. Most commonly, they are seen with bands of block or brown, and white or yellow. This snake is very versatile though, and is cited having more than 50+ color possibilities, including albino. They are not very large snakes, rarely exceeding 3 feet.

They are very flexible and live in many different conditions, including grasslands, forests, deserts, farmland, etc. The California kingsnake is obviously found throughout California, but also in Nevada, Oregon, Utah, Arizona, Mexico, and a few other places. This subspecies also suffocate their prey, mainly composed of rodents, birds, lizards, and other snakes and their eggs.

Very similar to the California kingsnake, the California mountain kingsnake is a medium sized snake, usually not exceeding 4 feet. They come in a more limited set of colors, predominantly being covered in black, red, or white rings. This snake spends most of its time underground or under surface objects, so it is not commonly visible out in the wild.

The California mountain kingsnake is a habitat generalist, and can survive in most any condition. They are found primarily in California and in the most southern part of Oregon. They primarily eat lizards, lizard eggs, birds, and amphibians.

The gray-banded kingsnake, most commonly found in Texas, New Mexico and Northern Mexico, earns its name from its main color, which is grey. But it is not just any plain grey snake. In fact, it features two main color morphs: the “blairi”, which is a wide red/orange banding, or the “atherna”, which is a thinner red/orange red banding.

There are many different variations of color, but these are the most common. Compared to other kingsnakes, which have narrow heads, this snake has a wider head. They are not commonly encountered in the wild, as they are nocturnal. They also reside mostly in mountains, where humans are sparse. Due to their habitat, their main prey is lizards and lizard eggs.

The Mexican milksnake is a popular subspecies of the kingsnake. It features red, black and cream or yellow colored banding, which sometimes leads to it being called a coral snake mimic. What’s interesting about their coloring is it varies per region. The further south they are, the more black they will have.

They are primarily found in Mexico, but have also been seen in southern Texas. The Mexican milk snake is nocturnal, as well as crepuscular, preferring to hide when temperatures get high. They are most active in cooler seasons, such as spring and fall. They eat rodents and lizards primarily. The Mexican milksnake is fairly small, usually around 2.5 feet long.

The Prairie kingsnake is a medium-sized snake, filling out around 3.5 feet at maturity on average. It is found throughout the midwest and southeastern United States, from Nebraska to Maryland and Florida to Texas. This snake thrives in grassland with loose, dry soil, and will also inhabit crop fields close to water.

They primarily eat rodents, but are not picky eaters. Like all other kingsnakes, they are non-venomous, but if they are harassed, they will shake their tail as a warning, which can sound very similar to a rattlesnake. The Prairie kingsnake is pretty secretive, tending to hide under rocks or in abandoned structures, so they are often not seen by humans in the wild.

The Santa Catalina kingsnake is a very elusive snake with not much known about it. This kingsnake dwells on the Santa Catalina island, where it earns its namesake. Located in the gulf of California, this snake is endemic, and confined only to that area, making it very rare.

The island is only 8 miles long, but only a single male has ever been discovered and studied, so there is not much information to provide on the Santa Catalina kingsnake. Most likely, they are similar in size and habits to other kingsnakes mentioned previously.

The Scarlet kingsnake is a well known kingsnake that resides in the southeastern and eastern regions of the United States. They are, of course, non-venomous, and grow to be about 4 feet long. The scarlet kingsnake can be found in flatwoods, pine savannas, forests, prairies, fields and a few suburban habitats.

This is a more common kingsnake to find, especially in swimming pools or in backyards. Their coloring is very unique. When they are first born, they are white and black with red banding. As they grow, they can develop yellow coloring in certain geographic areas. These bands form across their body in white or yellow, and usually get darker as you go up the snake’s body.

Also known as the short-tailed kingsnake, this snake is a small, slender type of kingsnake that only grows to about 1 and a half feet long. This rare snake’s body is gray colored with 50-80 brown spots that are separated by yellow to red sections.

This species has a small head that is indistinct from its body, smooth scales, and a very short tail. The short-tailed snake lives underground mainly and is not even seen by humans. They are only found in Florida and thrive in their sandy soils.

The Central Plains milksnake looks remarkably similar to the Eastern milksnake with black and white scales accompanied by red bands that vary in size and occurrence. Their head is usually solid black with a white flecked snout. They are most often seen March through October, and are only surface active at night for the most part.

Most are found under rocks near their hibernation spot, which is usually on rocky, prairie hillsides. This is why most of them live in north central Texas and northwest into Colorado and Oklahoma. The Central Plains milksnake primarily preys on lizards and lizard eggs.

The speckled kingsnake is only found in the United States, specifically in central and southern parts, from Iowa to the Gulf of Mexico. Compared to other kingsnakes, this snake prefers a wetter habitat. They are also considered a larger snake, usually becoming around 4 to 5 feet.

Their background color is black, but each scale has an irregular yellow marking that varies snake to snake that gives them a speckled look, hence their name. Their bellies vary greatly, but most often is black with yellow markings. The speckled kingsnake eats amphibians, small mammals, birds, and rodents.

The Madrean Mountain kingsnake goes by a few different names, including the Chihuahuan Mountain Kingsnake or Knobloch’s Mountain kingsnake. This snake is found primarily in Mexico, but also in the state of Arizona. This is a lesser known snake, but they usually sport black, white, and red/orange bands and reside in mountain territory.

They are a smaller snake than most other kingsnakes and are quite rare to see, therefore not as much is known about them compared to their counterparts. They are fairly elusive and mostly reside under rocks.

The black kingsnake is one of the larger kingsnakes, growing up to nearly 5 feet long. They inhabit areas from southern Ohio, western West Virginia, southeastern Illinois and south to northeastern Mississippi, north Alabama, and northwestern Georgia. This snake has a fairly small head, and is almost all black.

They can be hard to differentiate from other black snakes, but their mouths and snouts are usually freckled with white to help tell the difference. They are commonly found in overgrown fields, clearings, or abandoned areas. This snake has the same prey as all other kingsnakes, but mainly feeds on rodents.

The Arizona Mountain kingsnake is native to Arizona, hence its name. This snake also inhabits Mexico and parts of Utah and Nevada. It prefers habitats with rocks, tree trunks and undergrowth in mountainous areas nearby water. Their snout is white or yellow, and their head is usually black on top, sometimes with flashes of red over the eyes.

They vary in size, but most are between 2 and 3 feet. Arizona mountain kingsnakes are encircled by over 40 rings of white or yellow-white bordered by thin black and wide red sections. This snake will feed on just about anything, much like other kingsnakes, and can consume other snakes if needed since they can digest venom.

The desert kingsnake is native to Texas, Arizona and New Mexico. Like all its sister snakes, it is non-venomous. They are black or dark brown colored, with finely speckled off-white or yellow marks. The desert kingsnake loves to be near water and mostly feeds on amphibians, rodents, lizards, etc. It also feeds on reptile eggs.

They are a very shy snake and will most likely play dead if confronted with a human. Many humans actually enjoy their presence when they own farms, as they weed out vermin and other venomous snakes.

The eastern milksnake has a tan or gray ground color and three to five rows of reddish-brown, black-edged dorsal blotches. There is a gray or tan Y- or V-shaped mark usually present at the rear of the head. There are many different color variations for this snake. They are a shy snake, and spend most of their time under rocks or logs.

This snake is usually between 2 and 3 feet long, making it pretty small, and feeds on rodents, lizards, etc. They reside in Maine to Ontario in the north to Alabama and North Carolina in the south.

Kingsnakes in the United States

Various species of kingsnakes and milksnakes are found all over the country. Find out which species are found int he following states: