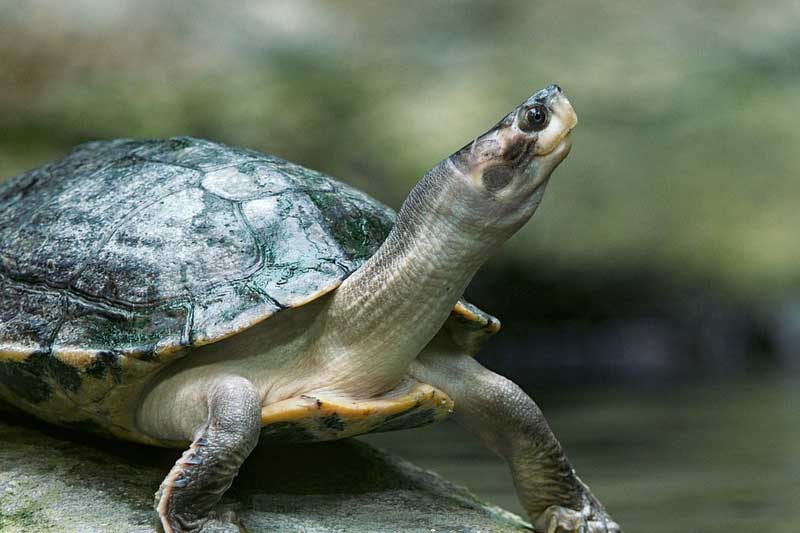 Turtles are fascinating creatures that live in almost every part of the globe. Turtles with long necks, hard shells, and cute faces have captivated humans for generations.

The term “turtle” can be interpreted in different ways. Most people believe that turtles are aquatic and tortoises are terrestrial. While this rule is usually true, there are exceptions, like the box turtle.

To zoologists and other scientists, though, turtles and tortoises are terms that are fairly interchangeable due to taxonomic structuring. For example, a red-eared slider is more closely related to a red food tortoise than a snake neck turtle.

Both interpretations are right in their own way, and one thing everyone can agree on is that these animals are truly unique in the ways they have evolved over millions of years.

10 types of turtles with long necks

In truth, most types of turtles have long necks when they stretch them out. In this article, we will be looking at 10 mostly aquatic turtles with long necks and learning what makes them unique.

These turtles are most often found in swamps and bogs, but can also be found on land or in other bodies of water. They are carnivorous and feed mostly on fish, insects, and invertebrates.

Like many fish and turtles, the Australian snake-necked turtle catches prey by creating a vacuum and sucking nearby prey into its mouth.

Females of the species are known to reach up to 11 inches, with males being slightly smaller. Their necks can amazingly reach lengths of more than half as long as their shell.

The Florida softshell turtle is most commonly found in lakes, rivers, and swamps in Florida, Georgia, and parts of South Carolina.

Females of this species can grow to 24 inches while males top out at around 12. As juveniles, their shells are olive with a neat leopard-like pattern, but once they reach adulthood they are dark brown and their spots are much less noticeable.

These turtles are carnivores and feed mainly on fish, snails, and insects, but they are opportunistic feeders and will grab anything they can catch.

Pink bellied sidenecks are native to Papua New Guinea and parts of Australia, but have gained popularity in Europe and the United States as pets.

In their native range, they are fully aquatic and are found in a wide range of freshwater ecosystems, such as rivers, streams, swamps, creeks, and lakes.

With a beautiful pink plastron and a yellow mask on its face, it is easy to see why these beautiful turtles are popular in the pet industry.

In the wild, these turtles are carnivores, eating fish, mollusks, and insects. They are thought to live between 30-50 years on average and are around 10 inches as adults.

The Chicken Turtle is found in the southeastern United States from east Texas to North Carolina, and all over Florida.

Chicken turtles are relatively fast growers that reach around 12 inches in size, but they have short life spans and only reach an average of 15 years of age.

These turtles are mostly aquatic, but they are known to leave the water in order to aestivate on higher ground during the winter and dry spells.

Native to Uruguay, Paraguay, southern Brazil, and northern Argentina, these turtles have a similar appearance to the Australian Snake Neck Turtles on our list but are actually more closely related to Matamatas.

These turtles are native to slow-moving waters in their natural habitat and are often found in lakes, rivers, streams, and swamps. Here they feed on fish, invertebrates, and insects.

Females tend to grow larger than males and usually reach a max size of 11 inches.

The black spine-neck swamp turtle is often commonly referred to as Spix’s sideneck turtle or the spiny-necked turtle.

These turtles are native to Central and Northern South America, where they live in freshwater bodies of water such as lakes, streams, and rivers.

Not a lot is known about this shy species, but they are thought to feed mainly on fish and aquatic invertebrates.

Dahl’s toad-headed turtle is native to northern Columbia north of the Andes mountains. It spends a large amount of time out of the water and aestivates in the dry season.

It feeds primarily on insects, snails, and crustaceans, but not much is known about their breeding or social behaviors.

These turtles are critically endangered and there are not currently any protected areas in their native range.

Painted River Turtles are native to Southeast Asia in Malaysia, Thailand, Sumatra, Borneo, and Indonesia. They live in freshwater estuaries and swamps and are quite shy.

These turtles are usually a dull brown color with black stripes, but during the breeding season, male’s shells will lighten and they will develop a bright red stripe on their heads. This coloration is where they get their name.

Painted River Turtles are herbivorous, feeding mainly on aquatic and terrestrial plants, fruits, and fallen leaves. Females can reach a max size of around 26 inches and males are significantly smaller, maxing out around 16 inches.

With one of the smallest natural ranges on this list, it’s no surprise that the Roti Island Snake-necked Turtle is critically endangered.

Found only on Rote Island in Indonesia, these turtles have suffered habitat loss as well as collection for both the pet trade and for food. They have also suffered greatly from being predated on by pigs and exposure to pesticides.

These turtles are commonly found in estuaries and creeks, but also spend quite a bit of time on land where they breed and lay their eggs.

The Matamata turtle is native to the Amazon Rainforest in Brazil, Peru, Ecuador, Colombia, and Venezuela. Here they live in slow-moving, often muddy waters of lakes, ponds, and rivers.

Matamata turtles resemble fallen leaves and they use this camouflage to blend into their surroundings, both to escape predation and to catch their prey.

Strictly carnivorous, these turtles catch their prey by vacuuming them into their mouth. They are primarily nocturnal and simply lay in wait for prey to pass by so they can snatch them up. Their main prey items are fish, crustaceans, and invertebrates.

The female Matamata gets quite large, measuring in at over a foot and a half and 38lbs when full grown. Males are only slightly smaller.