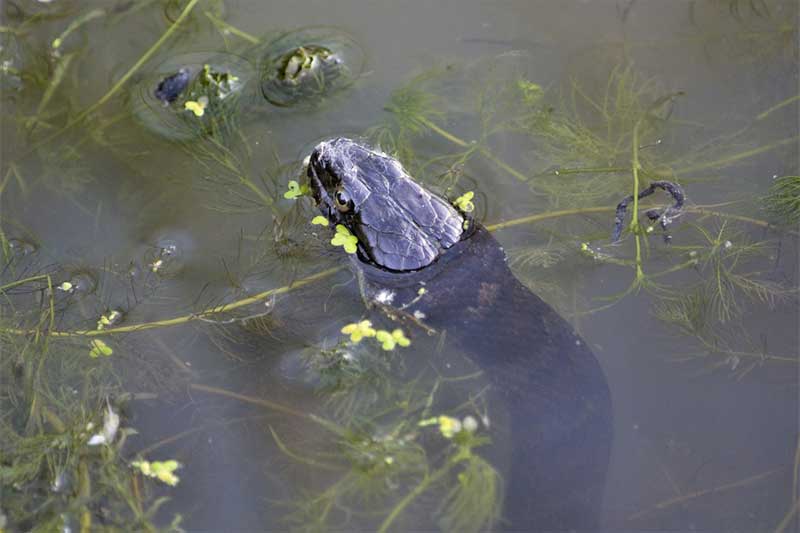 New Jersey isn’t commonly thought of as a state booming with wildlife, but 22 species of snakes call it home. New Jersey’s geography varies widely and features mountains, water, lowlands, forests and more. Combined with its forests and valleys, these snakes are able to thrive in New Jersey. There is only one type of water snake in New Jersey and we’re going to learn all about it in this article.

The one type of water snake in New Jersey

As we mentioned, New Jersey may be home to 22 species of snake, but only one type of water snake is a New Jersey native.

When we say true water snake we mean of the Genus Nerodia, which is a classification of non-venomous Colubrid snakes called “water snakes”.

We may use common water snake and northern water snake interchangeably throughout this article, but it is the northern variety that occurs in New Jersey. They, along with the garter snake, are the state’s most common snake and are actually very populous in the area.

Snakes in New Jersey similar to the common water snake

Common water snakes are non-venomous, and though they can be angry to be disturbed, will not cause much harm. Their coloring is similar to a few venomous snakes, though many do not reside in New Jersey. The one that does is the timber rattlesnake, but the two are quite easy to tell apart.

Here are a few of the other types of common snakes in New Jersey, including the state’s 2 venomous species:

One of the most common snake the northern water snake is confused for is the copperhead. This species is a large, venomous snake that that you don’t want to cross paths with. Copperheads and northern water snakes can sometimes look similar to the untrained eye, so it’s easy to see where the confusion comes from and how concern could be raised when you encounter an unknown species.