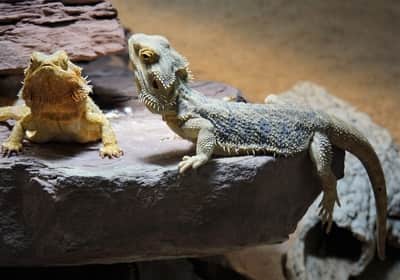 There is nothing more heartbreaking than watching your animals fight. Seeing a creature you have put so much time and effort into raising fight is a scary, and gut-wrenching experience.

If there is one thing bearded dragons don’t like, it is being housed together. They are naturally territorial animals and do not enjoy spending time with other creatures. 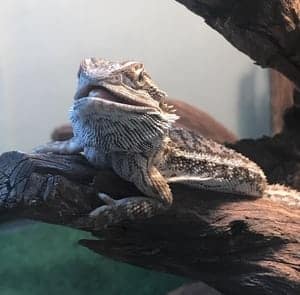 In the wild, bearded dragons are solitary animals that enjoy exploring their environment by themselves. The same can be said about their domesticated kin. Though bearded dragons tend to love human interactions, they cannot stand being around other beardies, or any other animals for that matter.

They tend to see any other creature as either prey or competition thus causing a lot of fighting.

Bearded dragons are not social creatures when it comes to other animals and have no desire to interact with another creature unless to eat it. In fact, when bearded dragons are hatched, they almost immediately run for cover, seeking a solitary and hidden environment to thrive in.

Whether it be another beardie or even another seemingly docile reptile such as a tortoise, it is never recommended to house your bearded dragon with any other creature. Some people argue that tortoises are acceptable cohabbers, however, a tortoise could still pose a threat to your beardie’s basking space, as well as the space of the enclosure in general.

Bearded dragons like to have their space and anything that poses a threat to that is in for a nasty attack from a beardie.

Because of their very active lifestyle, a bearded dragon’s enclosure should be at least 50 gallons and should not include any other living creature.

Gender Pairings Within the Enclosure

If two males are living together in the same enclosure, they will likely kill one another. Male bearded dragons are incredibly territorial and will fight to the death to ensure their territory is theirs. In the wild, bearded dragons fight to kill, and in captivity, that is no different.

It is also likely that one of the males will emerge as the dominant one and control the food and basking space. Because of this, the lifespan of the submissive beardie will be significantly decreased due to lack of food. This type of competition is unhealthy for both bearded dragons and can lead to a very unhappy and unhealthy life.

This continuous mating causes the female to lay far too many eggs and can lead to her death. It is possible to house males and females together for a very short period of time if your intention is to breed them. If not, it is important to keep them in separate enclosures to ensure the health and happiness of both creatures.

Housing two females together may or may not result in a fight because of the lack of dominance issues, but it is still not recommended. Similarly to the male/male living arrangement, typically one female will emerge as the dominant one and thus create a very hostile living environment for the submissive.

Bearded dragons are very content with being alone and do not feel lonely. The best way to ensure both of your females live a long fulfilled life is to allow them their space and not to force them to interact with one another.

My Bearded Dragons Are Housed Together but Don’t Fight, Should I Still Move Them? 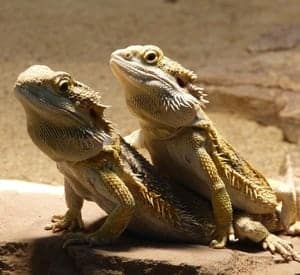 Even though they are not fighting, they still likely HATE living together.

The natural instinct of a bearded dragon is to be alone and, if given the chance, your bearded dragons would never choose to be together.

It is likely that one of the bearded dragons living in your enclosure has asserted dominance over the other and that is why they are not actively fighting. This seemingly gentle interaction, however, can turn violent quite quickly. There are also psychological issues that can be caused by two bearded dragons being forced to live in the same enclosure.

Although your bearded dragons may not be fighting, it is likely they are still experiencing adverse effects from living with another creature. These effects include but are not limited to :

There have been many cases of bearded dragons losing their tails and being unable to grow them back due to the stress of living with another bearded dragon. It is also likely that if they are injured, the wound could get infected and result in the loss of a limb.

Regardless of if your dragons seem to be fighting, it is an undeniable fact that they will live a much more happy and fulfilled life, in solidarity.

How to Tell If My Bearded Dragon Is Going to Attack

Many people like to have their bearded dragons interact with one another outside of their enclosures. If you do decide to supervise interactions between your two bearded dragons be sure to watch for the telltale signs of an oncoming fight.

When a bearded dragon’s body begins to darken, that is a good indication that they are angry, stressed, or feel threatened. If your beardie is feeling these emotions, it is highly likely they will attack soon.

Also like a cat, bearded dragons will hiss when they are feeling threatened. This hissing noise is a warning to their predator that they intend to attack.

The most telltale sign of a bearded dragon about to attack is when they fluff their beard and flatten their body. This not-so-subtle body language is the beardies way of asserting their dominance and warning their presumed attacker to back off.

If you experience your bearded dragon exhibiting any of these signs, it is important to assess the situation and ensure that both of your dragons are safe and happy. If you choose to ignore the situation or assume it is fine, it is possible one or both of your pets could be seriously injured or killed.

What Reptiles Can Be Housed Together?

Though bearded dragons are in no way suitable cohabitating pets, here are a few reptiles that thrive well living with friends!

Though there are always exceptions, generally, geckos can live together. While, like most reptiles, they do not need company, male/female and female/female housing arrangements for geckos are common and manageable.

If you do decide to house two reptiles together, make sure the enclosure is large enough to accommodate both animals comfortably.

The most important thing to remember when choosing animals to house together is that each animal has a different personality. Make sure to keep an eye on both of your pets and watch out for any abnormal behavior and signs of fighting.

It is never a good idea to house your bearded dragons together. Because they are territorial animals and like to be alone, forcing them to live together will cause a lot of fighting and possibly death. If you would like two reptiles that live well together, there are many suitable reptiles that thrive living with one another.