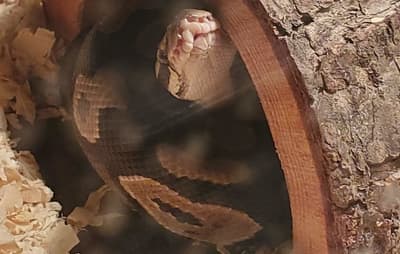 If you notice your snake giving off a foul odor, it may be for a couple of different reasons. Snakes are not naturally scented creatures, especially if they are fed an exclusive diet of rodents, and so odor — especially bad odor — on a snake generally comes from some kind of outside source.

So, why does my ball python smell bad? If your snake smells bad, this may be due to outside factors such as an unclean tank leaving its scent on the snake or your snake having slithered through its own urine or feces. Snakes who are scared may also musk, or release a foul-smelling liquid from their body.

In this article, we will discuss some of the reasons your snake may give off a foul odor, both of their own volition and as a result of outside sources. We will also give you a few tips on how to ensure your snake stays clean and happy, to avoid foul smells in the future. 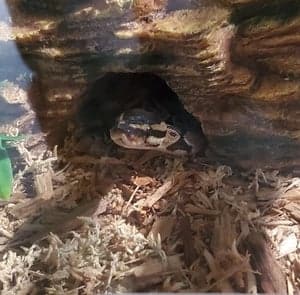 However, this does not mean that they do not pass waste altogether — after all, they are still animals just like any other reptile.

Even if you feel the need to clean your ball python’s enclosure less frequently, it is still good to check regularly for feces or urine to clean out, as your snake can slither through its own waste even moments after defecating, and this can leave your ball python with a nasty smell stuck to their skin.

This happens most often when your snake’s feces are more wet due to high hydration levels, as a more hydrated snake will pass more liquid with their waste than a less hydrated snake.

Always make sure that you are removing waste from your ball python’s tank or terrarium as soon as you notice it there, since if you smell bad odors on your snake even after cleaning, they may have managed to pick up some of the waste before you had a chance to clean it up.

If your snake smells overly foul and you want to give them a bath, you can do so, but only in clean, plain water. Do not wash your snake with soap or try to harshly scrub off any dirt or debris, as this could injure your snake.

If you have had your python for a while, you should pay attention to the way its waste smells normally. A snake’s liquid urine generally does not smell overly pungent, but a snake who is dehydrated will have smellier urine than one who is properly hydrated.

While python feces generally have a milder odor compared to that of other families of snakes, if your snake’s waste smells considerably more foul than usual, it may be a sign of infection or other digestive problems. If you suspect that this is the case, you should take your snake to a veterinarian or other reptile expert in order to get a professional opinion and advice.

Musking is a form of defense employed by snakes that involves them letting out a wash of nasty, foul-smelling liquid from their cloaca when they are scared or anxious.

Snake musk can take on a variety of different odors, but none of them are good — snake owners often state that their snake’s musk smells like rotten eggs or meat, skunk spray, urine or feces, wet dog, or even rotting greenery. Whichever scent your ball python’s musk takes on, it is very likely that your snake’s musk will smell pleasant.

Snake musking is a natural response to fear, and may happen considerably more often when you have first brought your snake home. A new environment can give your snake a large amount of unease, particularly if you are trying to handle your snake fairly soon after introducing them to their habitat.

Because of this, it is common for your snake to release musk onto your skin or clothes while you are handling them in their early days of being brought home. The only way to combat this is with time, patience, and regular handling, as the more you handle your snake properly, the less fearful they will be of you and of handling in general.

As long as you are gentle and easygoing with your snake, they will become aware that you are not a predator, and will then be less likely to musk on you out of fear.

Snake musk, somewhat like skunk spray, can leave a foul odor in your clothes or on your skin for up to several days. If your snake musks during a handling session, you should return them to their habitat right away in order to lessen any stress, fear, or uneasiness they may be feeling.

You can then somewhat neutralize the smell of the musk by hand washing with soap, using hand sanitizer, body spray, or baking soda. It is likely that a small amount of the scent will remain on the affected surfaces for several days, however, even with measures taken to neutralize the scent. 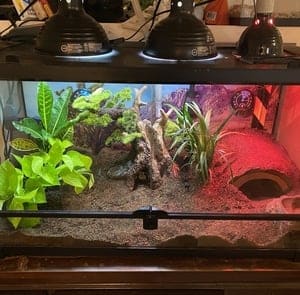 One last step you should be taking to ensure that your ball python remains as non-odorous as it should be is to regularly clean your snake’s tank. Even with urine and feces regularly removed, the tank can still begin to produce foul odors that can cling to your snake’s skin, particularly if they have slithered through the source of the odor recently.

Also, keeping your python’s habitat clean and fresh can minimize the growth or cultivation of harmful bacteria, which can cause illnesses such as respiratory infections if your snake is exposed to them for too long.

Other sources of foul odor in your snake’s tank can come from hidden droppings you might have missed while routinely cleaning out waste, food that your snake has thrown back up, rotting wood decorations or even decomposing shed skin, and mold.

Any or all of these can be easily missed in your ball python’s habitat, especially if you do not make a point of inspecting the hard-to-reach or less visible places during your routine cleanings. You should be cleaning your snake’s tank anywhere from once per week to once per month depending on how much waste your snake passes and how messy the enclosure gets between cleanings.

If you just can’t find the source of the bad smell, though, it may be worth it to place your snake into a temporary enclosure so you can give their normal habitat a thorough breakdown, cleansing, and disinfection.

This can be done by removing all accessories and decorations from the tank and soaking then washing them in warm, soapy water, replacing all the substrate or bedding at the bottom of the tank, then giving the empty tank a good scrub down with soap and warm water before drying and replacing everything.

If you are worried about wood in the tank rotting too quickly, you can swap out any wood pieces you have with snake-safe plastic replacements, as these do not rot and are less likely to be hiding bacteria.

Lastly, the bedding or substrate you use can have an effect on how bad your tank smells, much like with cat litter or rodent bedding. Snake-safe wood shavings or paper pulp are more absorbent and help to neutralize odors better than newspaper or paper towels (but never use scented substrate or anything treated with chemicals or perfumes).

Making sure that your snake’s tank is clean and fresh on a regular basis will not only help to keep odors from permeating and sticking to your snake’s skin, but it will also keep your scaly friend healthy and, most importantly, happy.

While ball pythons are not naturally smelly creatures (they don’t give off any odor at all, in fact), there are a few different things that may cause your dear pet to give off a rather nasty stink. Your snake may have urinated or defecated in their tank and then slithered through it, resulting in some of the particles (and smell) to stay on their scales even after you have cleaned the tank.

This can also happen with regurgitated or rotting food in the snake’s tank as well. If your snake has slithered through something smelly, you can give them a bath in warm, but not soapy, water. Snakes will also musk when afraid, and this can smell incredibly bad.

This may happen more often when you have just brought your snake home, as the combination of a new environment and an unfamiliar handler can put the snake under a lot of stress.

If your snake musks on you, just place them back into their tank so they can feel safe and comfortable, and then try to neutralize any smell on your skin and clothes with soap/hand sanitizer, body spray, or baking soda.

As always, you should make sure you are routinely and thoroughly cleaning your ball python’s enclosure, both to keep your snake happy and healthy and to avoid the buildup of any rot, mold, waste, or other things that can cause foul smells.